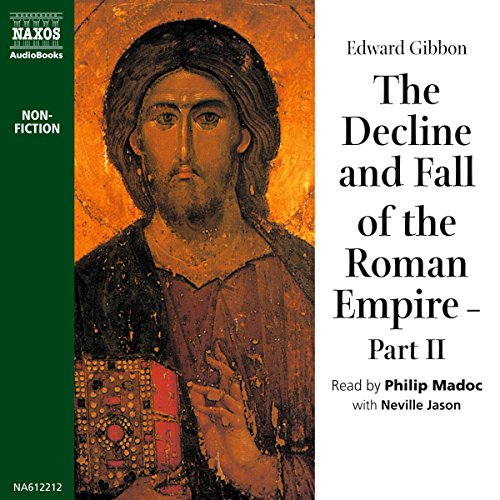 The Decline and Fall of the Roman Empire, Volume 2

With sweeping grandeur, Gibbon's masterpiece is enhanced by Naxos' production, which includes dramatic, classical music and two British narrators whose voices ooze with intellectual authority. The music - often somber - soars into majestic crescendos as the fate of the great Empire is sealed. Between straight readings of the text, one of the narrators announces a summary of the next chapter or two, an abridging technique particularly effective here. Little, if any, of the effect of Gibbon's accessible and profound prose is lost, even when detail must perforce vanish. A gripping history, this is superbly presented.

Edward Gibbon's Decline and Fall of the Roman Empire occupies an immortal place in the pantheon of historical masterpieces. This recording covers the final three volumes of Gibbon's work, tracing ten centuries in the life of the eastern half of the empire, whose capital city was Constantinople. Among the many figures who stride across Gibbon's stage here are the emperor Justinian I, a noble statesman and successful warrior, brought low by his lascivious wife, the former prostitute Theodora; the murdering Basil I, a peasant who nonetheless proved himself a worthy figure upon which to drape the purple; and the final emperor of all Constantine XI, who died on the battlements of Constantinople in 1453, valiantly fighting a losing battle to prevent the Turks from gaining a city they had craved for centuries. This is still the work that sets the standard for all histories of the period.

What listeners say about The Decline and Fall of the Roman Empire, Volume 2

Although not as nearly famous as the first volume, Volume 2 is great history of the Eastern Roman Empire from the fall of Rome in 476 to the sack of consantinople in 1453. This title has an excellent narrator and classical score, a must for Roman historian interested in the Eastern Empire.

An important piece of historical research

This is an excellent continuation of what was begun in Volume 1. Although I knew much of the content of Vol. 1 from studies of earlier Roman History, the fate of the Eastern empire up to the 15th century covered little known facts of an important historical period. Excellent narration!

A classic that is worth the wait.

Gibbon makes the historians of the day look like boys and girls at the kid's table. His command of the language makes all the difference.