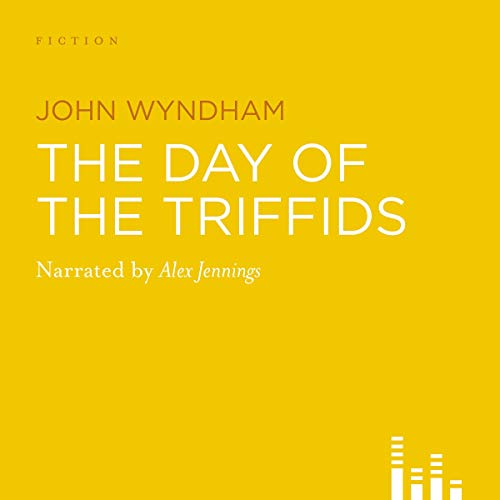 The Day of the Triffids

The Day of the Triffids

Bill Masen wakes up one morning in his hospital bed. His eyes are completely bandaged after an eye operation so he is unable to see. He immediately notices how still and quiet everything is. Having taken off his bandages, he discovers that both inside the hospital and out, the majority of the population (who watched a display of startlingly bright comets in the night sky the previous evening) have all gone blind, and realises that there is a terrifying new enemy for humankind to contend with. This is his thrilling, chilling and enthralling story....

When Bill Masen leaves hospital and goes into the centre of London, he finds that looting is rife as people are grabbing anything from the shelves of shops that they think they might find useful - mainly food.

While surveying the scene he comes across an attractive young woman who also wasn't blinded, Josella. Together they return in her car to her parents' home, only to discover everyone at the house has been murdered by the Triffids. The Triffids are walking plants which carry a vicious and lethal sting. Bill used to have one in his back garden, but far from being completely harmless they have now developed and are threatening to take over the world. They are also strongly linked to the mysterious comet shower.

Bill has an advantage over other surviors in that his job had involved him researching the Triffids. In fact, it was a Triffid sting that was one of the reasons he had been in hospital on the night of the comets, and this incident saved him from blindness. Together, Josella and Bill, whose bond to each other is growing, join a group of people, many of whom are blind but some of whom can see, with plans to head into the country...and their true struggle begins.

This is a favourite book, so I was very disappointed that it was an abridged recording.

"You don't seriously suggest they are talking when they make that rattling noise." Do you John Wyndham?

After reading John's book I felt a bit spooked. The wind picked up, the thunder rolled, and finally the pitter patter of rain sounded like Triffid's titter-tattling as they do. I wondered if somehow this apocalyptic Sci-Fi was about to take one paraphyletic leap out of Wyndam's novel and sting and snip away my reality. That's how this book made me feel. I can't explain it. I hardly understood it but I liked it.

Having been made to read this book many years ago for school - I was not impressed by it then, and cheatingly wrote the required book report for the teacher - you know how that goes: read the blurb, read a few paragraphs here and there, read a bit in the middle and the last chapter; generally read as little as possible then guess and write what the teacher wanted to hear. I'd hated that book (and reading in general). My how things change. Reading it again now as an adult has changed my whole perception. I will be reading it again :) Fun read.

the Narrator was great! really enjoyed the story and the characters. Woyld recommend this book

What a wonderful story. Just enough detail to engage your immigration. Loved it from start to finish.

The portrayal of women as useless nincompoops might’ve been all well and good back in the day, today though not so much.

The women who do make efforts to be independent and make their own decisions are lampooned for pig-headedness.

And the ending is a cop-out.

The most boring post-apocalyptic novel ever.

This must be the most boring post-apocalyptic novel ever. I understand that this book was one of the first to explore the subject. I'm so glad the followers did a much better job!

I love this classic novel of an insidious invasion of Earth by the least expected of organisms. Wyndham's original narrative, read beautifully by Alex Jennings, is much more enjoyable than either the movie or the BBC radio production based upon the book. A truly enjoyable listen and a fabulous narrator.

annoying music between each chapter.

Beautifully narrated but RUINED by "music"

It goes without saying this is a great book and it is beautifully narrated, but it is ruined by horrendously loud discordant music that jumps up and catches you out every time. Its completely random and unless you keep your finger on the volume button it WILL startle you. I think this sort of musical addition during the narration to be completely unnecessary.
I wont be returning the book but will be looking for another version.

Such a pity large chunks of the book are removed

the storyline is brilliant and the reading is very good. music a bit irritating

The narrator is excellent but the random music is irritating.

Its not a long book so why shorten it ?

shame about the loud music

enjoyable book & well read but was interspersed with rather loud music which was a bit grating. If you were listening & dropping off to sleep it would wake you up!

This is one of the greatest books written. It is a warning as to what happens when mankind indulges their darker side. It is a story of survival against the odds It is a story of hope..... it is also excellently written and is one of the first books I had as a child. the performance here is excellent, the story has lost none of its impact and is remarkably modern in its portrayal of the world. Definitely not dated. If you like sci-fi, or just like a damned good story, this is definitely worth adding to your collection.

I first read this book in high school, we did it for English and I loved it straight away then. Funnily enough I got fined by the school because they said that I hadn't returned my school copy of the book. I was sure I had bit I paid the fine. Needless to say years later whilst sorting through my many books I came across a copy and loe and behold it was my high school copy.

Anyway, I love this book, the writing is brilliant, so evocative and compelling. There's the horror of what the characters are dealing with in the immediate aftermath of the comet etc, then there are those moments of reflection on what life had once been and saying goodbye to it. My imagination is very vivid with this book.

I also love Alex Jennings reading of it. The voices he produces are perfect for the characters, in fact I am a big fan of his work and will search it out.

This is a book that I will come back to time and time again, love it.

Book of the Triffids

Sounding a little dated in places, but still an all time classic. Great to rediscover it.

Have loved this book for ever, long before the TV show. It is a timeless classic and next is The night of the Triffids.

Survivalist but not transcendentalist

This book depicts a dystopian world and how people deal with it. It does remind me films like 28 days later, mad max.
The ending is too abrupt but realistic.
At this new age of space race, this is a story feels so real.

The story is good but