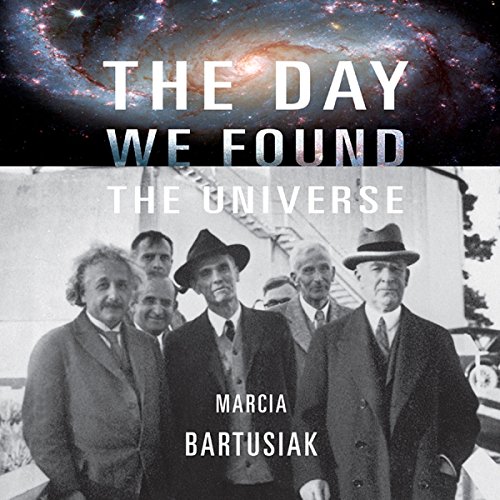 The Day We Found the Universe

If you've ever peered up at the sky on a clear night from somewhere in the Northern Hemisphere, chances are you've spotted Sirius  it is, after all, the brightest star in our celestial neighborhood. But what about it's constellational co-star, Murzim? Have you ever even heard of Murzim? Most of us haven't.

You have probably heard of Edwin Hubble, the astronomer who is often credited with the discovery that our universe is far bigger than our own Milky Way...and that it's expanding. But what about James Edward Keeler, the astronomer who first aimed his telescope at some mysterious nebulae and reignited the centuries-old debate over the size of our universe? Or Heber Curtis, who suggested that these nebulae were separate galaxies, years before Mr. Hubble entered the scene? And let's not forget Milton Humason who, while he lacked formal education, lent his keen observational powers to distant galaxies to help formulate the expanding universe theory.

Hubble, it turns out, is no more alone in the history of universal revelation than Sirius is alone in our night sky. in The Day We Found the Universe, acclaimed science writer Marcia Bartusiak attempts to "shed the spotlight once again on the entire cast of characters who contributed to revealing the true nature of the universe". Bartusiak's detailed account of the astronomical endeavors of the early 20th century brings these characters back to life  not as popular myths, but as human beings whose own genuis, ego, and personal circumstance served sometimes to promote, sometimes to hinder their success. Along the way, The Day We Found the Universe provides us with a close examination of the scientific process at work, and lends rare insight into the baffling, often tortuous course of discovery.

The narrator of The Day We Found the Universe, Erik Synnestvedt, delivers a thoughtful, intelligent reading. His performance reflects a strong understanding of the subject matter  both scientific and character-oriented. His voice, while consistently steady and informed, responds dynamically to subtle changes in tone and pace throughout the narrative. Emily Elert

From one of our most acclaimed science writers: a dramatic narrative of the discovery of the true nature and startling size of the universe, delving back past the moment of revelation to trace the decades of work--by a select group of scientists--that made it possible.

On January 1, 1925, 35-year-old Edwin Hubble announced findings that ultimately established that our universe was a thousand trillion times larger than previously believed, filled with myriad galaxies like our own. It was a realization that reshaped how humans understood their place in the cosmos. Six years later, continuing research by Hubble and others forced Albert Einstein to renounce his own cosmic model and finally accept the astonishing fact that the universe was not immobile but instead expanding. The story of these interwoven discoveries includes battles of will, clever insights, and wrong turns made by the early investigators in this great twentieth-century pursuit, from the luminaries (Einstein, Hubble, Harlow Shapley) to the lesser known: Henrietta Leavitt, who discovered the means to measure the vast dimensions of the cosmos . . . Vesto Slipher, the first and unheralded discoverer of the universe's expansion... Georges Lemaître, the Jesuit priest who correctly interpreted Einstein's theories in relation to the universe... Milton Humason, who, with only an eighth-grade education, became a world-renowned expert on galaxy motions... and others. Here is the watershed moment in our cosmic history, splendidly arising from the exceptional combination of human curiosity, intelligence, and enterprise.

"One of our most thrilling science writers, has captured the excitement of the amazing years at the beginning of the 20th century when we truly discovered our universe. With a great cast of astronomers and physicists - from Lowell to Hale to Hubble to Einstein - this book is a cosmic delight." (Walter Isaacson, author of Einstein: His Life and Universe)

What listeners say about The Day We Found the Universe

I try to read in unfamiliar areas every week and so I looked to "The Day We Found the Universe" and was not really disappointed. I further seek out books that are well written and read as well as informative. This book met those expectation.

In this volume Marcia Bartusiak has done an exceptional service by making this scientific story available to general readers. Her section dealing with problems of positivism in research were refreshing.

This book has enabled me to understand the contributions of Einstein, Harlow Shapely, Hubble and others to the understanding of our universe, its size and significance. Sections on Hubble were very interesting. Pages on how Einstein developed his theoretical perspective was warming. All of these players become real and human in the reading.

Readers who need to be entertained to maintain interest might be a little disappointed in this volume, however. The prose is wonderful, but will not carry the reader along on its own. Readers and listeners alike will need to concentrate or they will not benefit. Those without any background will, perhaps, not understand everything covered. There is a lot here to benefit the novice reader coming to this topic with an open mind and a the willingness to "listen up."

nicely drawn history of the idea of galaxies

This book is a well done history of the emergence of the idea of galaxies or island universes from the 19th to the mid-20th century. The people such as Shapely and Hubble are portrayed with their foibles as well as their more admirable qualities. The narration is quite good.

This book describes in an accessible language the great controversies of early twentieth century astronomy. Bartusiak also doesn't not leave out the characters involved, delving into the personalities, quirks and aspirations of the influential astronomers of era. It does so without dumbing down the science.

Unfortunately, the narration is less than stellar. The narrator proceeds at a good pace but reads almost every sentence with identical intonation.

A history of astronomy I didn't know well

I always thought that Edwin Hubble sort of single handedly discovered that there were other galaxies beside our own, expanding the universe tremendously. But this book has set the story straight. Basically theories have gone back and forth between the idea of island universes and "the milky way is the only universe".

It's also interesting that the book goes on after Edwin Hubble proved other star systems were far beyond the realm of our galaxy. Because he (and his collegues) also discovered that the galaxies were moving away from us. It's funny to hear that even Hubble thought "that can't be right". But it was. And it let to Lemetre's theory that the universe is expanding. And if you track those movements of the galaxies back in time, you get to a point in history where they all originated from. And the big bang theory.

One of the better audio books about physics and astronomy. I could easily follow the narration while commuting. The narration can be a little monotome, but it's not that off putting.

Thanks to those who search & those who record it!

Very informative of the phenomenal scientific discoveries and progress we have made over a relatively short time. Its mind-bobbling to contemplate whats coming next.

enjoyed second listening even more because I have become involved in astronomy and understand more.

It would be nice to have books of this quality for many other historical reviews of scientific progress. Developments in spectroscopy, discoveries in electricity and magnetism, selected discoveries in biology, botany, geology, stellar dynamics etc. "The Day We Found the Universe" had just the right balance of technical and history information. Great purchase.

For any interested in the techniques and history of Astronomy this is an excellent book and well worth the reading.

This book delves deeper into the personalities and politics of a crucial time in astronomy. You get a real feel for the characters and how our understanding of our place in the universe evolved. Unfortunately it is spoiled by an absolutely dreadful narrator. He chops every sentence into multiple staccato pieces and the gaps seem to occur at random places in the sentences. His voice is also monotonous and the the poor narration distracts one from the content of the book.

The book was terrific as was the narration.
In fact it is still the only book I have downloaded and listened to twice.

Greatly informative and full of character. Got me hooked on the people and their lives as well as the developing science and astronomy. Wonderfully written and performed. I have listened to it over and over, still enjoying it.