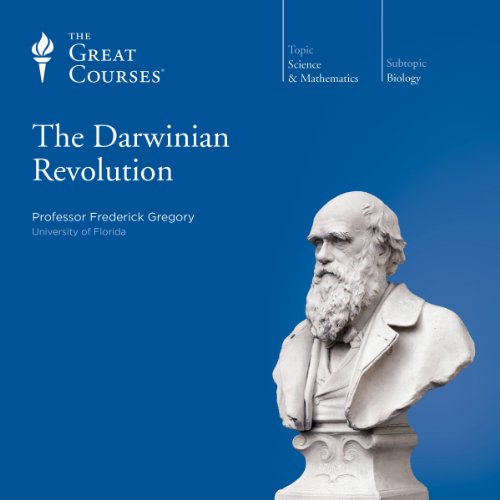 Published 150 years ago, Charles Darwin's On the Origin of Species - the text that introduced the world to natural selection - is among a handful of books that have changed the world. But the route to that status has been surprisingly circuitous and uncertain. Darwin's profoundly revolutionary message has often been misunderstood, as have his own views on evolution, the intellectual background that led to them, and the turbulent history of their reception.

Now, in 24 absorbing lectures by an award-winning teacher, you learn the remarkable story of Darwin's ideas, how scientists and religious leaders reacted to them, and the sea change in human thought that resulted.

You'll learn how Darwin arrived at his theory of natural selection-the idea that those members of a species best equipped to survive will tend to outlast others, thus changing the species over time-very slowly and cautiously. For he was all too aware of the intellectual dynamite inherent in its implication of no divine intervention being necessary for a rich diversity of life forms on earth.

And you'll see how Darwin worked out the details of his theory not only by building on both his own observations and the insights of others, but also through amazing leaps in the face of apparently contrary evidence. You'll also see how the firestorm of religious criticism Darwin's theory faced has scarcely subsided to this day, with Professor Gregory bringing this controversy up to date by carefully examining the claims of intelligent design, the latest and most sophisticated attempt to challenge Darwin on religious grounds.

I just finished "The Darwinian Revolution", part of The Great Courses series, narrated by Professor Frederick Gregory. I really enjoyed this very in depth discussion. It wasn't just about Darwin's theory but its historical and scientific context and consequences. Prof. Gregory is one of the most enjoyable lecturers I've ever heard in an audio book.

Darwin's theory wasn't evolution - by the time Darwin published his famous book the idea of evolution had already become evident to many who had become aware of the new science of geology (which discovered the tremendous age of the earth) and the record left by fossils (which were just beginning to be understood as the remains of ancient creatures, not just fancy gewgaws left behind by God for man's bemusement). Just previous to this book I read another very good one on geology called "The Map That Changed the World: William Smith and the Birth of Modern Geology" by Simon Winchester, another favorite of mine. I recommend it for a good overview of the beginnings of the science of geology.

No, Darwin's theory was the theory of natural selection, the first well reasoned explanation of a natural mechanism for the evolution of life.

The theory of natural selection was accepted reasonably well considering the science of the times. It had some problems. Where were the transitional fossils? How did small advantageous changes get established in a large population, rather than simply being subsumed back into it? But by far the theory's biggest problem, in the age of Victorian scientific progress, was that evolution by natural selection was purposeless - it had no goal. What good is progress if there is no worthy goal to progress towards?

Evolution by natural selection lost popularity after Darwin's death and reached its lowest point around the turn of the 20th century. Then scientific discovery gradually began to catch up with it. The fossil record became more and more complete and transitional forms were discovered. Microbiology began to understand the role of chromosomes in reproduction, and with the discovery of DNA, (and more importantly, the way DNA was able to replicate itself) a method for both the generation and preservation of random mutations became known.

And so natural selection once again became the favored mechanism for evolution.

Professor Gregory spends a few chapters addressing fundamentalism, creationism, and intelligent design, and like some other authors (I'm looking at you, Richard Dawkins) manages to put them in their proper historical and scientific context without being either condescending to their supporters, or insulting to the intelligence of the reader. He also discusses the two most well known mis-applications of natural selection, "social Darwinism" and eugenics.

All in all a very interesting read (listen). Professor Gregory's style is very engaging and manages to navigate through complicated scientific and cultural waters without getting lost in details, or becoming a boring drone.

Would you listen to The Darwinian Revolution again? Why?

Yes, in fact I already have. I finished and started right back at the beginning because it contains so much great material.

It's a pivotal moment in how humans view themselves and the professor looks at it from every angle.

What does Professor Frederick Gregory bring to the story that you wouldn’t experience if you just read the book?

When the series started with Professor Gregory's education and it included a seminary, I almost quit there. I'mt so glad I didn't, I think his background imparted a unique element to the story.

I grew up in an incredibly fundamentalist Christian household and thus, evolution was a complete taboo. it was incredibly helpful to explore this concept in a three dimensional way and get a better understanding of what frankly seems to have become such an emotionally loaded topic, that few can speak to the issue in an objective, and neutral way. The lecturer has spend decades learning all there is about it from a historical perspective. I found it helped to smooth out some of the gaps in my education. thanks alot.

I have listened to two of these Great Courses by Professor Gregory in a row. First was a "History of Science". I loved both. From the ideal college I never went to. Glad learning can take place way after college and the subject matter was always explained in a way that didn't leave me in the dust.

I learned a lot about the Darwinian Revolution form Professor Gregory. He is very knowledgeable on this subject and encourages his listeners to listen and learn more about Darwinians.

One of the best science histories

I delayed listening to this Great Course. I’m not sure why. It has to be the best Great Course I’ve listened to. Great storytelling,. Frederick Gregory was very engaging and managed to review a lot of early studies, criticisms, and articles without the listener getting lost. That’s frequently my challenge in the Great Courses; keeping track of when and where someone had said something. I’m not sure how he did it, but it’s a rare occurrence.

I also liked how Gregory outlined the historical and modern controversies arising from natural selection.

AT A GLANCE:
How did the idea of evolution by natural selection spring up and take root? Inquire within.

CONTENT:
Starting before Darwin, voices like Laplace and Lamarck set the stage as precursors to evolution by natural selection. Darwin's life and circumstances are then assessed before moving on to the development of his theory. The initial objections and debates are covered in great detail. We are treated along the way to some unexpected corrections against revisionist history; for example, Darwin accepted forces outside of natural selection as minor contributors to evolution. The Scopes trial is declared to be less significant than its mythology and not a turning point in public discourse. The religious authorities of the time (and ever since) have had varied responses, which are studied here with respect and nuance. He ends by musing about worldviews and how logical thinking can have different starting positions, and briefly touches on widespread assumptions within the scientific community.

OVERALL:
Professor Gregory is almost uniquely qualified to handle this topic and provides more than enough info to place Darwin within his historical context. I should note that the PDF included here is not the book-length play-by-play common to many Great Courses, where the professor simply reads from the prompt; rather, it is more like an outline and lecture notes that prove useful for cementing the lectures when read afterwards.

Would you listen to The Darwinian Revolution again? Why?

This course helps to comprehend the mindset of the people before, during, and after the Origin, which is fascinating.

The Professor was great but the material Difficult

The Professor was great but the material difficult to absorb in only 20+ hours of lecture. One could spend a lifetime on just the religious aspects confronting Darwinism. After listening to lectures like these in the great courses, I ask myself did I learn something? Absolutely but I still have more questions than were answered.

I thoroughly enjoyed to series. While it was detailed even dry in some places, this history of evolutionary science was quite informative. The speaker was very good and easy to listen to.

This audiobook is a fantastic scientific overview. It does not simply explain what Darwin's theory of natural selection was but its consequences as well as its scientific heritage - e.g: Other theories and hypotheses which were around prior to and concurrent with Darwin's theory - such as catastrophism or LeMarcian evolution.

The book also takes considerable time to explain these previous theories and the various terms used as well as multiple challenges to each discussed topic.

This volume does not suggest as some do that Darwin's paper was published and suddenly every thing changed overnight but makes it clear that at every stage after a new evolutionary theory was put out into the scientific field that it went through intense peer review and even that early on when the very first rumblings of such a concept were being discussed it was treated with similar scorn to that which believers in a flat earth or other such ideas would experience today,

If you are at all interested in a fair and intellectual as well as in my opinion unbiased discussion of evolution, Darwin, scientific advancement, natural selection and other related topics I could not recommend this book more highly. It is also excellently narrated by a clear and knowledgeable speaker who has the decency to inform the audience when he is discussing a topic if he is referring to the opinions of the individuals being discussed or his own opinion. 10 out of 10. If this Professor covers any further areas for The Great Courses series I will be sure to buy them.