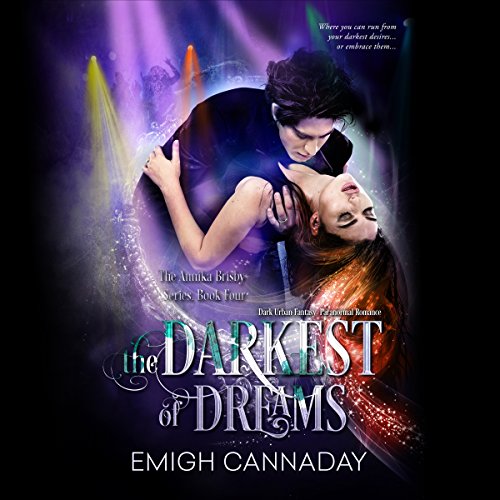 The Darkest of Dreams

A heinous crime. An empire in turmoil. And a modern girl at the center of it all.

Darkness has fallen on the Marinossian family, leaving ruined lives in its blood-stained wake and leaving Annika to pick up the pieces. With a deadly doppelgänger still loose and most likely in deadly pursuit, she's escorted back home to wait out the storm and heal her broken heart...however long that may be. But when she makes a shocking discovery, she'll do whatever it takes to make things right.

A world away, Talvi has been dragged to the desolate prison on Bleakmoor Island where he awaits trial for murder. His time in solitary confinement has pushed him to the brink of madness. He starts seeing spirits in the shadows and an angel with red hair. The only thing keeping him from completely losing his mind is the mysterious outlaw in the cell across from him. He's one of the Näkki - the dark elves who were banished from his country for seducing demons to gain their powers. As Talvi gets acquainted with his new friend, he catches a glimpse of the black magic gift that's reflected in his demon eyes. Talvi also learns another version of his country's history that makes him question his convictions. Is the oath he made to his country worth the sacrifice he'll have to make in order to keep it? He vows to get some answers...if he ever gets out alive.

The bigger question for Talvi: Will Annika be there if he does?

The Darkest of Dreams is the fourth installment of the Annika Brisby Series. It will not be the last.

What listeners say about The Darkest of Dreams

Could not stop listening to this and can't wait for the next book. Very captivating! Love how all the characters have different a accents

This Series Gets better abs better

This series just gets better as to go, I really enjoy all the ups and downs in their relationships . It’s much better than I expected

Tragedy has struck! Anika has lost two people she loves more than anything over a heated argument that went too far. Struggling with the loss of them both and feeling like everybody blames her, she is banished back to her world. As she picks up the pieces and begins to heal and move on with her life, she discovers something that throws her world upside down and leaves her to question everything. I just can't believe I finally have the continuation of this story. I feel like I spent between when I finished book three and when I started reading this book completely yearning for more! That should be on the cover of this book. "Prepare to be completely sucked in and absorbed by this story." This is now definitely one of my favorite series of all times. I never want to see it end. I do have just one tiny criticism about the book. There are parts of the book that get a bit repetitive Just little paragraphs that could use a bit of re-wording. Not really many that I could tell. Then again, I was so absorbed in the story I can't really keep track. The narrator was fantastic as well. I give this a full five-star rating. It's one of the best series I've ever read. I will definitely be going back and re-reading this series multiple times. I just know it! If you're interested in fantasy novels with thrilling drama, this is a perfect book for you! Warning, this book does contain adult content and language.

I have been nervous about this book, considering what happened in the Scarlet Tanager.....

I have to say this book lived up to my expectations... But What a roller coaster it was...

I can't wait to see what the future holds for the whole Marinossian Family..

After waiting so long for this book to come out I can’t believe it’s already over!!!!! It’s Absolutely ridiculous how fast the chapters flew by!!! As always the story kept me hanging on every word, with this author I can never guess what will happen next. Excellent read, I will not give away any spoilers. Just read this series- they are all fabulous. Hurry on the next installment... PLEASE!

Did Not See This Coming....

This was amazing! The story kept me in the edge of my seat. Sometimes I found myself talking to the characters out of frustration 😊. I am so glad to see the development of Finn, and Talvi’s relationship growing more mature and Annika and Talvi’s. You’ve GOTTA listen/read this! Love Nick Cracknell’s voice as a narrator he really brings this story to life!

when Talvi ends up in prison for "killing" his brother he starts questioning the country's history when he starts talking to a a prisoner across from him.

not sure how to feel

I'm not really sure how to feel about this series. it has good moments, but I honestly can't recall them. it's not forgettable, but confusing and frustrating with a good works build behind it. every time I think the story is gonna go in a direction, I'm either wrong or it goes that way but with such an obvious twist to it I'm stuck feeling like I should have seen it coming.

The truth will be known

Two worlds existing, one with humans who don't believe in magic, and one with elves, fairies and other magical beings. When Annika and Talvi first met the two worlds collided starting a complicated love affair. I love the magical world created by Emigh Cannaday, the world building, the characters in both worlds, and the struggles. I have been hooked on this series from the first book, the story is so rich with different layers.

The narrator, Nick Cracknell, has a wonderful voice and gave unique voices to the many characters. His voice added depth to the characters.

I received a copy of this audio book from the author and this is my honest review.

Need the next book!! So exciting!

Omg! Talk about you cliff hangers! I need the next book! Emigh Cannaday writes to well that you can’t put the book down until it is finished!
I highly recommend this series!

So glad I kept going

I was pretty floored after the last book’s ending. So much so that I needed some time before starting this one. I’m very glad I did! This was a great read through and through. It clears up so many questions and bits of heartache from the previous books. I highly recommend it. I’m looking forward to see what’s next for my favorite characters in book 5!

This book is another roller coaster ride of twists and turns, ups and downs. It's full of the expected angst and emotion, although the reader gets to see some much needed and long-awaited growth and maturity from Talvi and Annika. I don't think they've solved all their problems (or we wouldn't be waiting for another book(s). LOL), but I think they are on the right path now...probably...maybe. I was crushed by the ending of Book 3, Scarlet Tanager. Fortunately, the ending of this book is not quite as dramatic, but it will still leave you on pins and needles waiting for the next one.

The narration is excellent. Really captures the atmosphere of events and the emotions of the characters.

I received a review copy from the author. This is my honest, voluntary review.

The Much Anticipated 4th Instalment to the Series!

First of all, this is the fourth book in the series and is best enjoyed with prior knowledge of the plot. If you haven't read or heard the previous books in order, please experience them first. I promise it will be worth it!!

The Darkest of Dreams literally picks up where the previous book ends. Finn is dead by Talvi's hand and Talvi is in prison. Annika is at the centre of this complex twist in the plot and the Marinossian family and friends are shattered at the loss of the two men. For her protection, a broken-hearted Annika is sent home to the US with two Palladin guards. And now my typing fingers are tied because I do not want to give anything away!

Needless to say, readers and listeners can count on Emigh Cannaday to write a thoroughly enjoyable, complex, dark, sexy and well thought story. This book does not disappoint! What it does is leave the audience gasping for more!

As for Nick Cracknell's performance, it is in a league of its own. He literally puts the audience in the scene as though the listener is witness to the events. Each character, regardless of how seemingly insignificant, is brought to life with exquisite dedication.

I cant tell you how eagerly I have waited for this audible book.. I really enjoyed reading the book but I wanted to listen to the audible version because the presenter is so good and has a real "feel" for the story. I feel like he gets more and more into the series as he reads. His enjoyment of the story clearly comes across as he reads and that made such a difference to how I enjoyed listening to his presentation. The end of the last book was unexpected and that feeling carried on into this one. The whole story is very emotional but happily it gradually lightens up and all is revealed. Anika and Talvi's story is a passionate one. By the end of the book I was satisfied by how things were turning out and my mind had eased considerably. I love this series and the people in it.