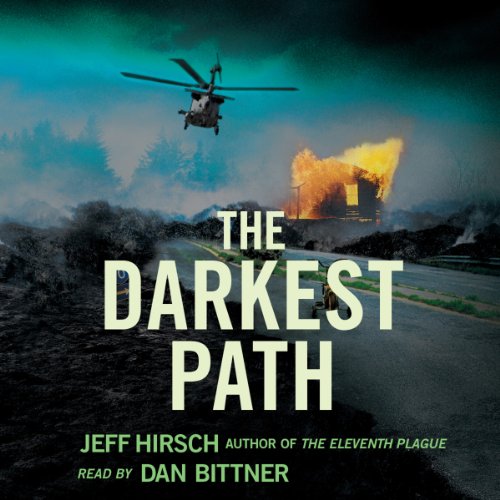 A civil war rages between the Glorious Path - a militant religion based on the teachings of a former US soldier - and what's left of the US government. Fifteen-year-old Callum Roe and his younger brother, James, were captured and forced to convert six years ago. Cal has been working in the Path's dog kennels, and is very close to becoming one of the Path's deadliest secret agents. Then Cal befriends a stray dog named Bear and kills a commander who wants to train him to be a vicious attack dog. This sends Cal and Bear on the run, and sets in motion a series of incredible events that will test Cal's loyalties and end in a fierce battle that the fate of the entire country rests on.

What listeners say about The Darkest Path

Old story from when I was a kid but the re read was good. My only complaint is there still isn’t a damn second book. So much could be filled or made into a second. The story of Cals journey to his parents or his reunion with Nat or Bear after that or the journey of the feds fighting the path. So much opportunity for more!

The Darkest Path is filled with everything this type of book should have and then once it's filled up all the required "civil war/civil unrest " basics it goes a thousand miles further just to keep you on your toes. Anyone who is a patriot and enjoys reading about good fighting evil this is your type of book!!!

An amazing book worthy of 10 stars.
A good book to listen to over the weekend.