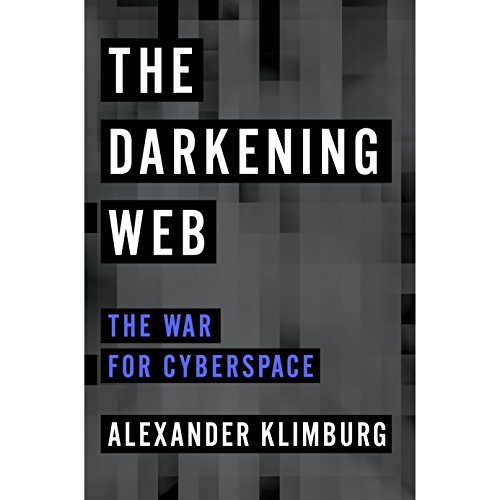 No single invention of the last half century has changed the way we live now as much as the Internet. Alexander Klimburg was a member of the generation for whom it was a utopian ideal turned reality: a place where ideas, information, and knowledge could be shared and new freedoms found and enjoyed. Two decades later, the future isn't so bright anymore: increasingly, the Internet is used as a weapon and a means of domination by states eager to exploit or curtail global connectivity in order to further their national interests.

Klimburg is a leading voice in the conversation on the implications of this dangerous shift, and in The Darkening Web he explains why we underestimate the consequences of states' ambitions to project power in cyberspace at our peril. Not only have hacking and cyber operations fundamentally changed the nature of political conflict - ensnaring states in a struggle to maintain a precarious peace that could rapidly collapse into all-out war - but the rise of covert influencing and information warfare has enabled these same global powers to create and disseminate their own distorted versions of reality in which anything is possible. At stake are not only our personal data or the electrical grid but the Internet as we know it today - and with it the very existence of open and democratic societies.

Blending anecdote with argument, Klimburg brings us face-to-face with the range of threats the struggle for cyberspace presents, from an apocalyptic scenario of debilitated civilian infrastructure to a 1984-like erosion of privacy and freedom of expression. Focusing on different approaches to cyberconflict in the United States, Russia, and China, he reveals the extent to which the battle for control of the Internet is as complex and perilous as the one surrounding nuclear weapons during the Cold War - and quite possibly as dangerous for humanity as a whole.

Authoritative, thought-provoking, and compellingly argued, The Darkening Web makes clear that the debate about the different aspirations for cyberspace is nothing short of a war over our global values.

"A prescient and important book.... Fascinating." (The New York Review of Books)

"Klimburg’s book is a plea for cyber-sanity, but it is also a chilling read." (The Sunday Times, UK)

"It’s this type of worldwide cyber-chaos - the type that could down airplanes, turn off respirators and plunge millions into darkness - that Alexander Klimburg warns of in The Darkening Web.... Klimburg’s warnings regarding Russian cyber-aspirations...are on the money." (The New Scientist)

What listeners say about The Darkening Web

The importance of the internet in all aspects of modern life is often invisible, but we should all be aware of how we inhabit this space, and of the dangers and opportunities that it contains.

An eye opening book about our dependency on the internet and possible hyperbolic threats darkened by the fact this is new territory for all involved.

This book focuses more on the civilian and government side of malicious use of information, hacking, surveillance large scale disruptions made possible by the evolved internet and its use in warfare, spying, and the appetite for control.

It is without a doubt that the internet is no longer only an information conduit, but utility to all that use it. This means disruptions on a large scale can have catastrophic consequences, some intended and others unforeseen.

The author highlights in very unbiased detail, the use of this tool by governments and large corporations that may to control and dominate, while the common users, the mass, may be subverted in to a darkening web of disinformation, and manipulation to the benefit of the ones at the helm.

When such a potent and powerful tool is available, who should have control. Who should set the rules. Who governs, and who polices, and more importantly who polices the police. These are real questions needing a resolution with no easy answers.

The book opens the debate, and highlights the stakes for all. A good introduction to the existential threats produced by this golden goose.

Great read on the realities of cyber at state, political and civil levels

Author does a great job explaining how the internet was built and how it works. He also dives into cyber security and encryption. Sharing insight from his time at a NATO contractor, Klimburg also covers how governments and civilians alike use cyber to influence culture and politics. You will get your fair share of 'fake news' and info leak coverage.

Not for the Security it IT pro

I rarely write full reviews but this time I am doing so warn cyber security professionals. I am now half through the book and I asked for a refund, this book covers things all of us already know, it is written for the somebody who don’t understand technology already. If you are an IT or security pro, you won’t learn much. the book Optimizing Cyber Deterrence is way better.

Provides a unique insight into how the web is used

I am not a tech guy so some of the stuff went over my head. however the story is clear and relevant. Data is information that can be weaponized for good and bad, the trick is to figure out which is which. who owns it, who uses it and what they plan to do with it leaves you with a lot of questions.

I only got thru a couple of chapters, but this book was mostly hysterical warnings about how dangerous the web is without any substance to back it up. Waste of a credit