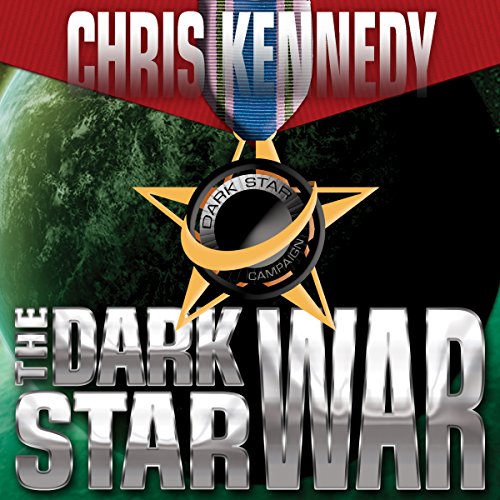 Able to operate in two universes and armed with unavoidable time-based weapons, the Shaitans have proven unstoppable. Although Calvin has experience fighting the Shaitans, the Ssselipsssiss are down to their last three planets, and Calvin's assistance may very well be too little, too late.

The only ship with any success against the Shaitans is the Vella Gulf, which can jump to the Shaitans' universe and fight them on their own turf. But time is short; will the crew of the Vella Gulf be able to find the mysterious "Dark Star" system of the Shaitans and stop them before they destroy Terra?

Faced with an implacable foe, the Terrans have been forced into an alliance where the enemy of their enemy might be their friend...or might not. The crew of the Vella Gulf will have to choose their allies wisely as the stakes are the highest possible - only one race will survive the Dark Star War!

What listeners say about The Dark Star War

So, I still hate the narrator. I will never be getting books based on the narrator. There are other narrators like RC Bray and Ray Porter who I will find books they narrate even though I don’t know the author nor the book. I feel like the ending in this book (and the whole story?) was abrupt. There is an open end for follow up stories, but it didn’t really feel like a cliff hanger, it just felt rushed. In the epilogue, it wraps up what felt like an important quest central to everything with what equates to a “womp-womp.” Still worth the listen even though I hate the narrator.

the narrator reads like he is talking to five year olds instead of sci-fi fans....and who calls ship engines "motors" WTH!!!!

After the battles and betrayal of the previous book, Dark Star War has a much more upbeat feel. I was grinning listening to people getting their just desserts. There's still outstanding acts of heroism and self sacrifice, but even in the worst situations you know which way the axe will fall. Some new and unexpected allies add to the list of excellent characters for Craig Good to voice, and open up new possibilities I would like to see later on.