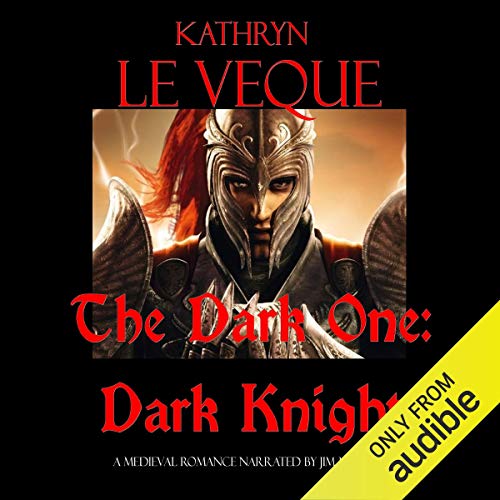 The Dark One: Dark Knight

The Dark One: Dark Knight

It is A.D. 1486. Fresh from his treacherous turning of the tides against Richard III in the Battle of Bosworth, Sir Gaston de Russe's reputation is dark and dirty. Those loyal to Richard hate him and those loyal to Henry Tudor fear him. He is, after all, The Dark One.

In order to gain a strong foothold in Yorkshire, Henry sends Gaston to one of the largest fortresses in the north, a massive bastion called Mt. Holyoak Castle. Having formerly belonged to Sir Guy Stoneley, who is now a prisoner in the White Tower after his capture at Bosworth, the castle is still the home to Guy's wife, Remington, her three sisters, and her son.

Gaston takes possession of Mt. Holyoak, pleased with his acquisition and intrigued with Lady Stoneley, who is beautiful, somewhat shy, and demure.

Gaston soon comes to find out that Mt. Holyoak harbors a horrible secret of rape and abuse. Guy Stoneley abused his wife and sisters, so much so that the women look to Gaston as their savior. As Gaston struggles to administer the North and form alliances with those still loyal to Richard, something more is taking place that threatens to distract him from his task. The lure, the power, is more than he can resist.

A strong bond is forming between the knight believed to be the ultimate traitor and the lady who has known nothing but sorrow and horror. And with that realization, a delicate love story begins as two lonely people find solace and comfort with each other. Gaston soon realizes he loves Remington more than anything, which sets the stage for the biggest battle of his life: the fight against the Catholic Church in his quest for an annulment so he can marry her.

Join Gaston and Remington as they embark on an epic adventure of discovery, love, anguish and sorrow, defeat and victory. From the hills of Yorkshire to the halls of London, share their story of a lifetime where dreams become reality and true love really does conquer all.

Kathryn is becoming one of my most favorite and loved author. I have read several of her books and this one was no different. I love Gaston so much! I found myself listening as I wake up and prepared for work, on my way to work, on lunch, then driving home and while I was home. It was so interesting.

EPIC! I LOVED it! Read the white lord of wellesbourne first. The characters and the story were great. I couldnt stop reading/ listening. There were no over-the-top stupid interactions or words said to create a plot twist. I will definitely read/listen to it again. I think they equal de Wolfe and jordan. Simply a new classic.

Kathryn Le Veque is quickly becoming a favorite author of mine. I devour all 25 hours of the book and still wanted more. This book is simply epic. Ms. Le Veque books are so vivid that I can imagine being there. This was such an entertaining tale. I loved Sir Gaston De Russe character so much. He was a no nonsense man, but as the story progress he became a big old teddy bear where Remington is concern. Lady Remington and her family has been though so much heartache and deserved a man like Gaston. This books has it all and will have your emotions all over the place. I laughed, cried, and waited on the edge of my seat to see what would happen next. Narrator did a great job bringing the story to life.

I've read most of Kathryn Le Veque's books and I've really enjoyed them, but nothing, NOTHING prepared me for this book. When I first looked at it, I was hesitant because it's 25 hours long. I usually get bored when the book is that long. That didn't happen once during the 3 days I got to experience this story. I'm sorry the book ended. I don't know what I can listen to now that's going to compare.

The story is too massive to condense. I couldn't do it justice by trying. The hero and heroine are wonderfully written. Not a false note to jar the story line.

The narration was spot on. Jim McCabe was wonderful and brought all the characters to life.

Just trust me. You won't be disappointed.

The ONLY negative thing I can find to say about the book is that Audible really needs to put some effort into editing. Several times, the narrator stopped and reread a line to his better satisfaction. Editor should have caught that.

This has been the most emotional book I have ever read. I have laughed, And I have cried throughout the whole book. It had twist interns that I didn't even see coming. A must read.

This is my favorite of all the books that I've listened to buy this author. The storyline is interesting and sexy and moves at a good pace, and the narrator is great.

I have read many of LeVeque's books, and this one has it all. What a great story. The narrator did a great job. You will not be disappointed. Don't let the length intimidate you - the journey is worth it. Enjoy!

I enjoy this authors work but this was a special treat. The epic story ( over 20 hrs) always stayed on track without losing focus or my interest. I laughed, sighed and cried which made my husband and kids roll their eyes but it just didn't matter.
This will be one of my go to books on a cold day when I need a cup of something hot and story to warm my heart.

Wished the story would go on and on...

and with such fine character development, it could.

A couple of minor technical glitches near the end, but didn't take away from story too much.

After listening to “The White Lord of Wellesbourne” I knew I liked the writing style of Kathryn Le Veque and I had to listen to this second book to find out more about Gaston, the Black Knight.

Ms. LeVeque’s clever way of writing draws you into the story and makes you feel as if you are part of the action—actually feeling the events as they happen and love being there. This epic book has times of pure sadness, times of laughter and times of intense emotion. It's truly and emotional rollercoaster that kept me guessing throughout.

Although I thought the language was a bit modern in places it didn’t take away from how much I enjoyed this book. If you enjoy Medieval historical love stories—put this one on your list!