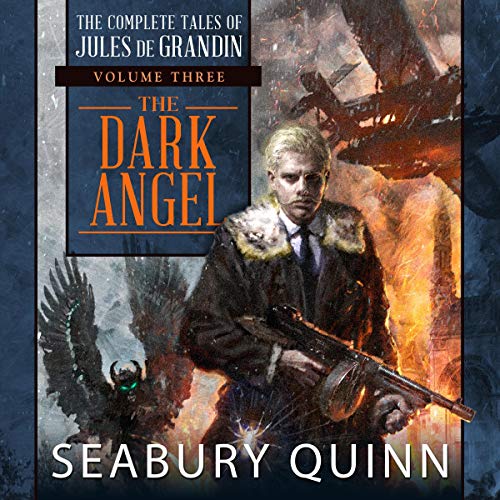 The Complete Tales of Jules de Grandin, edited by George Vanderburgh, presents all 93 published works featuring the supernatural detective. Presented in chronological order over five volumes, this is the definitive collection of an iconic pulp hero.

The third volume, The Dark Angel, includes all of the Jules de Grandin stories from "The Lost Lady" to "The Hand of Glory", as well as The Devil's Bride, the only novel featuring de Grandin, which was originally serialized over six issues of Weird Tales. It also includes a foreword by Darrell Schweitzer and an introduction by George Vanderburgh and Robert Weinberg.

What listeners say about The Dark Angel

A fun collection for fans of the pulps

First off, there is a thirty minute introduction, some of which is repeated in other volumes. There is some bashing of Quinn's work by HPL, who has gained in popularity while Quinn who was more popular when first published has faded from the public sphere. There is a lot of background information, including the fact that Quinn's stories, and the Grandin stories in particular, helped Weird Tales Magazine survive the Great Depression. Overall, it makes the case for reading these little known, enjoyable stories. This is an okay collection of Grandin stories, probably only for Grandin fans. I preferred the first volume to this collection. There is definitely a dated fear of others, meaning those not of European ancestry. But there is not a total contempt for these people as in some stories of this age. The exoticism is used to fuel the supernatural aspects. Unlike the first volume, I would suggest taking this one in small bites. The Lost Lady, 2 stars. The eurocentrism is rather overwhelming in this one, with Cambodians as the strange 'others'. This odd tale of kidnapping, a strange Corsican Brothers kind of magic, and unusual likenesses felt like a weak addition to this series. 'The Ghost Helper', 3 stars. With Grandin's help, can a ghost help protect her family. Not many surprises, but a fun ghost story. Satan's Stepson, 3 stars. This had a lot of really good bits, but also parts that lagged. Good editing could have made this very good. The Devil's Bride, 2.5. There is a satanic cult, kidnappings murders, crucifixions, damsels in distress, and a global cast of quite strange characters. There is just too much in this story, it just kept going and going. The Dark Angel, 3. Though there aren't any surprises in this story, it is a solid entry in the Grandin stories. A town is plagued by what appears to be a devil that is killing off sinners. Once more Grandin gets to spread his romantic streak to a pair of young lovers. The Heart of Siva, 2.5. Some Hindus take offence at a play that portrays the Hindu gods. No real mystery here. The Bleeding Mummy, 2 stars. An interesting tale with a supernatural twist. The Door To Yesterday, 3 stars. A mixed bag, at times racially insensitive and alternately sympathetic. A curse, a giant white snake, a rebellion, brutality, hereditary memories, and revenge. A Gamble In Souls, 2.5 stars. Twin brothers and the woman they both want have lives that are inextricably linked. Throw in a supernatural rescue and Grandin's weakness for lovers who are separated. The Thing in the Fog, 2.5 stars. A werewolf story, with a couple of young lovers and an ex-boyfriend. The Hand Of Glory, 2 stars. Rather long for what you get.

Many stories in the heyday of Pulp/Weird Tales were racist, but these stories are so overtly racist they make Lovecraft's racism look tame.