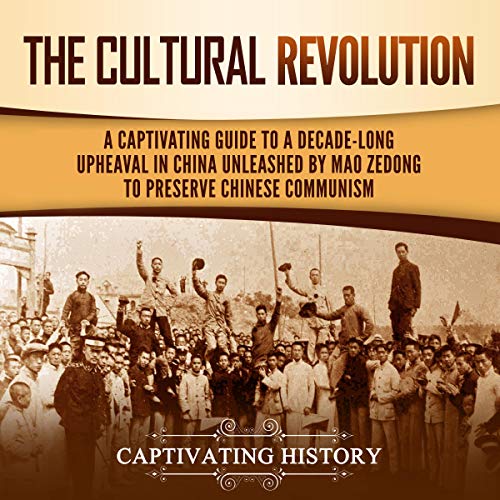 If you want to discover the captivating history of the Cultural Revolution, then pay attention...

The Cultural Revolution, known in full as the “Great Proletarian Cultural Revolution”, was launched by Mao Zedong, the chairman of the Communist Party of China, as a means of quashing capitalism in China. He wanted to ensure that the desire for a communist government would remain strong in the country long after his death. Like other previous leaders who attempted to continue to rule after their death, his attempt did not work out quite the way he had planned.

Over the course of a decade, from the summer of 1966 to 1976, Mao Zedong implemented a number of changes that have led him to be known as one of the most brutal tyrants of the modern age.

In The Cultural Revolution: A Captivating Guide to a Decade-Long Upheaval in China Unleashed by Mao Zedong to Preserve Chinese Communism, you will discover topics such as:

So if you want to learn more about the Cultural Revolution, buy today!

What listeners say about The Cultural Revolution

Very interesting and very important book. Many parallels between China's Cultural Revolution and what is starting to be seen and currently experienced in the USA today. Very easy read and informative at the same time. Highly recommended.

Excellent. A window into Hell. Atrocities and chaos orchestrated by Mao to solidify his power.

A good general history. More precise statistics would have improved the effect this history should create. I couldn't help but feel, throughout the book, that the author didn't want to make the CCP / Mao look too bad.

Fascinating and horrifying account of those terrible years in China. The fanaticism of today's jihadists had a precursor there which even former Red Guards are at a loss to explain. The book provides more detail than I really need but the analysis is excellent and most enlightening.

This was an interesting book.

This was an interesting book. I only had a vague knowledge of the cultural revolution before reading this. The author did a good job of incorporating stories of individual experiences while presenting the overall picture of what was happening.

A very thorough account of an incredibly turbulent period in modern Chinese history. It is the clearest recounting I have seen of this chaotic era.

This is an important book by a brilliant author and historian. I highly recommend it.

Very interesting, detailed, full of data and not boring. I ve been in china many times and this book told me things I did not know at all.

Definitely worth listening. This book is extremely well researched and have some very eye-opening information about the period when China was closed off to the rest of the world. It is a laborious read, but worth while.

A very informative and well-written book on a piece of history not really discussed deeply in many historical chronicles. This piece is extensive with good research behind it.

There are two audible in this series. Each deals with China and keeping the country as a communist country and Chairman Mao.

This is an informative and useful light overview of the impact of the Cultural Revolution in China. Here is what I, as a history professor having done researched about this time and living during that time remembers;

After Mao’s death and I recall the trials of the Gang of Four - mentioned in the audible, even though coverage on the news services was spotty and it was very a faraway country and the majority of Americans did not really pay attention about the trials.

China during the First Half of the 20th Century, The Suspicion Behind the United Face, The Five-Year Plan, the Great Leap Forward, and the Events Leading to the Cultural Revolution, and fighting the Capitalism of the West, as well as many other events that helped to give you a better understanding of the bigger picture.

I liked it, it actually goes into how deranged Mao was. Just an evil man.

A great insight into a dark time in recent history

It showed some parts of the Cultural Revolution that would have not known about. Also cited sources as well as showing why these events took place beyond the stated motives, such as how they're psychology and Ideology lead to their actions.

This audible was an eye-opener for us. as we're studying different forms of government, this audible gave us an overall view of communism which is thrown around too often today and incorrectly.

The audible gave a well researched description of China’s history that Mae was responsible for when he was the ruler. Very sad to see that so many Chinese people were killed during that era and how long it took for the government to address issues and mistakes made. The audible also included some personal information on Mae and other leaders. It gave an understanding on how paranoid Mae was even with his own followers.