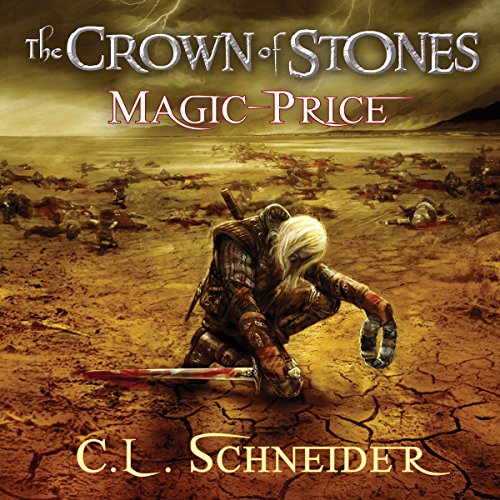 The Crown of Stones: Magic-Price

Ian Troy is one of the Shinree, a fallen people with an inherent addiction to magic. Scorned and reviled for the deadly side of their spells, the Shinree are bred as slaves. Their magic is suppressed by drugs and used only as it serves the purposes of the other races. Descended from a long line of soldiers, Ian is conscripted into the Rellan army and made to fight in their longstanding conflict against the ruthless Langorian invaders. The downfall of Rella imminent, Ian goes against orders and turns to the Crown of Stones, an ancient Shinree relic of untold power. Ignorant of its true purpose, Ian uses the crown to end the war and pays a terrible price.

A decade later, still tortured by the aftermath of that day, Ian lives as a bounty hunter in self-imposed exile. Having renounced his magical heritage, he curbs his obsession with a steady stream of wine and regret. He struggles to put it all behind him, until a fateful encounter with a pretty assassin brings Ian's past crashing into the present. Targeted by a rogue Shinree, and a ruthless old enemy, Ian is forced to use magic again. His deadly addiction is rekindled, and his life of isolation is brought to a swift end.

With the land he gave up everything to protect once more in jeopardy and his people's future at stake, Ian becomes embroiled in a violent race for control of the Crown of Stones. To save the realms and those he cares for, Ian must embrace the thing he fears most: his own power.

What listeners say about The Crown of Stones: Magic-Price

Can't wait for the whole trilogy on Audible

I've read the whole trilogy and believe me, this first book is just the tip of the iceberg! Daniel Storm's narration is a perfect match for Schneider's dark, raw prose. I highly recommend this book to lovers of adult fantasy - full of magic-action, tension and witty banter infused with a sexual charge.

As soon as I started this book, I couldn't stop listening. Definitely looking forward to the next installment!

There were two sections of this that didn't suck. Don't waste your credits on this book.

What did you love best about The Crown of Stones: Magic-Price?

I’m a huge fan of C. L. Schneider. Her ability to weave an enthralling, engrossing epic tale is without compare. Narrator Daniel Storm brought her characters to life and enabled an all encompassing pace that made It impossible to press stop as you become immersed in this magical world.

What other book might you compare The Crown of Stones: Magic-Price to and why?

This was a very refreshing and new story with the addiction to magic plot. There are no other books I can compare it to at this time.

Picking my favorite scene was so incredibly hard. I finally had to pick the ending scene where the entire story comes to a head. I will not give any spoilers to those who have not listened/ read it but let me just say that Draken’s wickedness knows no bounds. The way Ms. Schneider writes this scene and Mr. Storm delivers it, I still can’t decide if I’m disturbed or titilated.

The book constantly brought smiles to my lips as Ian’s quick wit and sarcastic banter with his companions Malaq and Jarred. The action scenes drew me in and made me hold my breath to see what happened next.

Narrator Daniel Storm has a very pleasant voice and was able to add several voice inflections to allow the listener an array of characters and dialects.

This had to be one of the worst books ever written! This is right up there with Estes Truth Mark junk. He beaten more than any hero should. What is this? I can only think of one thing to say and it is “don’t!” Don’t read it. Don’t listen it! Just don’t. You have been warned.

I loved this book. The story kept me pulled in and I didn't want to stop. The narration was great too. 👍👍👍👍👍

Would you listen to The Crown of Stones: Magic-Price again? Why?

I loved the story. I found myself in a completely different world with fascinating characters, and I would love to go back and visit again.

What other book might you compare The Crown of Stones: Magic-Price to and why?

Game of Thrones or Lord of the Rings. It is equally epic and all-consuming.

What does Daniel Storm bring to the story that you wouldn’t experience if you just read the book?

The story is what took me--and the characters. I loved it all.

struggled to even get a couple hours in.. just bad character development, poor writing and very open story without a objective and no backstory/history is given besides vague references.

loved the story very good. can get passed the authors voice for a well story.

Interesting entrance to a new world

I did enjoy the story a lot. though, it's in a untraditional style that takes a little getting used to. Each scene is well crafted and written well, but can feel a little jumpy in the beginning of the story. The world and systems within are well crafted, and the take on magic is intriguing and different. Overall i enjoyed the story and the characters within it. the only thing I think takes away from the story is the narration. the narrator does characters well, and it's easy to differentiate each without question. but, something felt lacking overall with the voice of the story. the MC is a very emtional character, and i felt that it wasn't captured as well as it could have been. overall the entirety is great, while narration wasn't perfect, it wasn't drab enough to ruin its entirety.