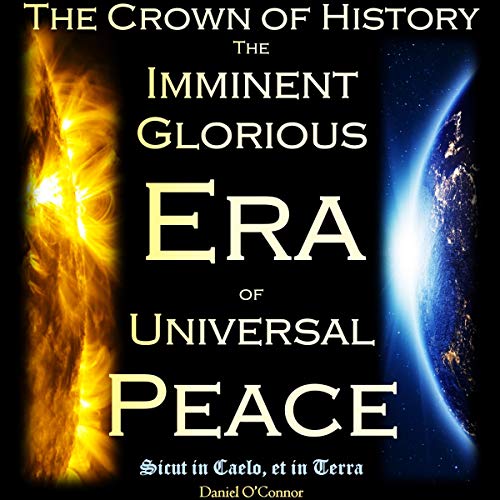 The Crown of History

What if I told you that the world is on the cusp of such a radical transformation that all the anxieties which now incessantly crowd your mind are about to die away like the jabbering of monkeys upon the entrance of a roaring lion? That all that now worries and depresses you is about to melt away like a dream upon the blessed intrusion of a new reality you hitherto scarcely could have comprehended? Well, that is a reality.

The Era is coming. Nothing and no one can stop it. But it is coming like a freight train, and you do not want to be on the wrong side of its arrival. This short book has been written to put you on the right side.

Most importantly, you will learn what Jesus revealed about it to a certain woman by the name of Luisa Piccarreta: what its essence is, how you can live its essence here and now through the Gift of Living in the Divine Will, and how you can - with this Gift - hasten the Era’s arrival. You will learn how the whole history of the world has been carefully orchestrated by God Himself, leading up to the very moment in which we now live: the moment in which history is ready to receive its crown. You will learn how very pivotal your role is in this Greatest Story Ever Told which is now reaching its fulfillment before our eyes.

Or, are you simply wondering how all the enigmas above could possibly have a single hitherto unknown solution that could be relayed within this small audiobook?

Then listen to this book.

"The whole world is upside down, and everyone is awaiting changes, peace, new things. ...peoples are impoverished, are stripped alive, and while they are waiting, tired of the sad present era, dark and bloody, which enwraps them, they wait and hope for a new era of peace and of light. The world is exactly at the same point as when I was about to come upon earth. All were awaiting a great event, a new era, as indeed occurred. The same now; since the great event, the new era in which the Will of God may be done on earth as It is in Heaven, is coming - everyone is awaiting this new era, tired of the present one, but without knowing what this new thing, this change is about, just as they did not know it when I came upon earth. This expectation is a sure sign that the hour is near."

What listeners say about The Crown of History

ESSENTIAL read for any catholic or anyone worldwide

Wonderful book life changing for me

Wonderful narration listen and Give your will to Jesus and bring forth the era of peace!

This is a life changing book! The author eloquently narrates a story the world needs hear. By following the simple instructions Mr. O'Conner lays out in this beautiful book not only will your life quickly change but so will the life of millions even billions of people everywhere. I was so worried over the state of our country and our world that I was losing hope, now i am full of hope because I know Jesus truly "has my back" and wonderful plan for the that includes me and everyoneI love.

A source of peace and hope in this difficult times

Glad that someone took the time and knowledge to explain and clarify Luisa's writings and how they fit into the Catholic Church's teachings and traditions.

Your Soul Depends on It

I loved this book! I have been to Corato Italy and toured Louisa's home and church. I will evangelize for the hastening of the new era of "Living in the Divine Will ". Say one Our Father a day for the rest of your life. Fiat!!!!!