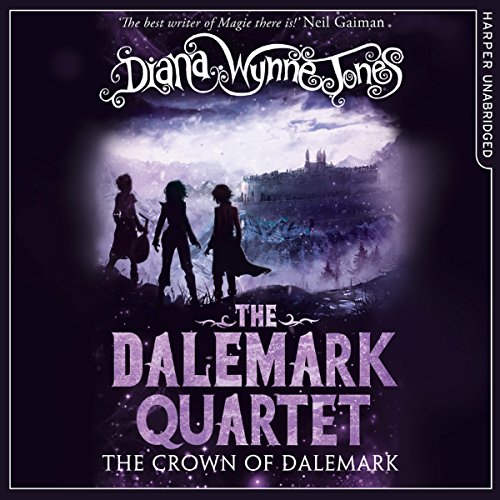 The final book in the epic fantasy-adventure series from 'the Godmother of Fantasy', Diana Wynne Jones. Now back in print!

'Mitt arrived at the top of the steps, panting, and pushed open the door. "Oh, there you are," said the Countess. "We want you to kill someone."'

Since his arrival in the North of Dalemark Mitt has become disillusioned. The North seems no more free than the Holand he fled, a fugitive accused of attempted murder. And now he is trapped by the order to kill someone he doesn't know or else risk the lives of his friends. Forced once more to flee, Mitt is joined by Moril, the quietly powerful musician, and Maewen - out of her time, but mysteriously fated to play a part in their quest. For the evil powers of the mage Kankredin are re-assembling, and only the Adon's gifts - the ring, sword and cup - can once more unit Dalemark.

Praise for Diana Wynne Jones:
"...Her hallmarks include laugh-aloud humour, plenty of magic and imaginative array of alternate worlds. Yet, at the same time, a great seriousness is present in all of her novels, a sense of urgency that links Jones's most outrageous plots to her readers' hopes and fears...." (Publishers Weekly)
"The best writer of magic there is." (Neil Gaiman)
"Truly magical - guaranteed to leave you gasping - even hotter than Potter." (The Bookseller)

If you could sum up The Crown of Dalemark in three words, what would they be?

What was one of the most memorable moments of The Crown of Dalemark?

It's difficult to say, as in some ways the point of the book is the quest itself. I enjoyed the part where Mitt and Moril ended up in a river by surprise.

This is the 4th and final book in the series. I do wish that consistency of narrator could be maintained, across all books in a series, as some characters had completely different accents/ voices from previous stories, which had the effect of changing their personality.

The most annoying thing, though, is the curious way in which this narrator mis times punctuation in many, many sentences. It sounds as if she inserts a full stop at the end of a line of text, rather than at the end of the sentence. It really jars, and breaks up the rhythmn of the story. Such a shame.


Was this a book you wanted to listen to all in one sitting?

No, I had to take a break from the narration.

Like many of this author's stories, the ending seems to come about in rather a rush, and without a solid conclusion. However, I'm used to this ( big Wynne Jones fan) and can enjoy the story for its own sake.

Liked the book; what was wrong with the narrator?

The book? Yes. The audiobook? Not really.

Not reviewing the book.

I have to agree with the previous reviewer - it was as if the narrator couldn't read - there were endless pauses mid-sentence, as if the reader had reached the end of the line and didn't remember that sentences occasionally carry over lines. She also made mistakes which suggested a lack of thought behind the reading e.g. saying 'Mitt's large bony hand closed over the FIRST that was trying to stab Maewen.' Ok, it's in the kindle text, but does it make sense? No! - and any thinking human being ought to have recognised it. It seems like they've just run the text through some kind of voice generation software. Very disappointing.