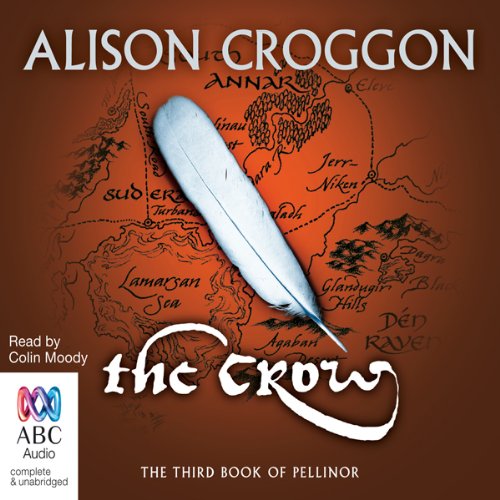 As this enthralling epic nears its climax, the young heroine’s brother discovers his own hidden gift – and the role he must play in battling the Dark. Hem is a weary orphan whose struggle for survival ends when he is reunited with his lost sister, Maerad. But Maerad has a destiny to fulfill, and Hem issent to the golden city of Turbansk, where he learns the ways of the Bards and befriends a mysterious white crow. When the forces of the Dark threaten, Hem flees with his protector, Saliman, and an orphan girl named Zelika to join the Light’s resistance forces. It is there that Hem has a vision and learns that he, too, has a part to play in Maerad’s quest to solve the Riddle of the Treesong. Alison Croggon creates a world of astounding beauty overshadowed by a terrifying darkness, a world where Maerad and Hem must prepare to wage their final battle for the Light.

Liked the book so far, but strangely I found the narration is annoying on any speed setups, the voice has a weird vibration which sounds strange at any given speed, not sure if this is just poorly recorded sound issue

I really like this series but the narration by Colin Moody really detracts from the enjoyment of this book.

The story is fantastic. The narration lacks affect except for generic nondescript foreign accents. I have listened to the other books in this series 2 or 3 times but I haven't been able to listen to this past a few chapters. Why they didn't stay with Eloise Oxer makes no sense to me.

The Crow by Alison Croggan

got use to the other narrator found it weird to have another, would have been 5 stars if not for this. loved getting to know hem and see him grow as a person

I really, really enjoyed listening to the first two books in this series. I've gotten well hooked on Maerad's journey and want to know what happens. As a writer myself, I understand the importance, when you have several key characters, to delve into each one's story and bring them all together at the end.

But the change in narrator, for me, makes this book impossible to listen to. I had so very much gotten into the tone and rhythm of Eloise Oxer's voice, that this change to a male narrator was very, very jarring and shocking.

I get that as this book is mostly about the male characters, and so might be read best with a male voice, it just doesn't work for me. Colin Moody entire pace and accent is all wrong when compared to the previous 2 books. I found speeding it up to 1.25 speed helped some, but not enough.

I've made the decision to skip this book all together and move on to the final book. I hope there is enough preamble in that book to fill in some of the missing pieces. If not, will just have to make it up as I go.