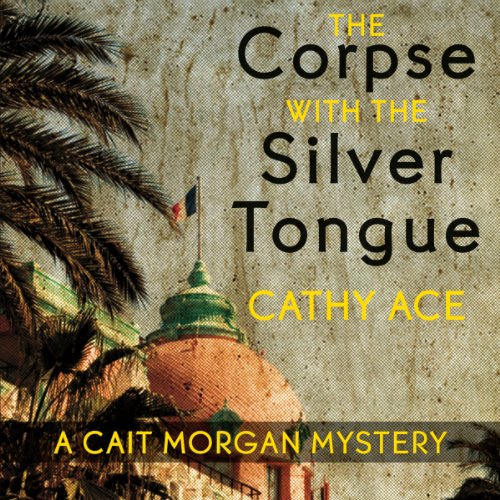 The Corpse with the Silver Tongue

The Corpse with the Silver Tongue

In the south of France, where hatred simmers in the heat, a man seemingly admired, and certainly feared, drops dead at a dinner party. All of the guests fall under suspicion, including Welsh-Canadian professor Cait Morgan. A criminologist who specializes in profiling victims, Cait sets out to solve the murder - and clear her name. Add to this the disappearance of an ancient Celtic gold collar said to be cursed and there you have the ingredients for a Nicoise salad of death, secrets, and lies.

Will Cait find the killer before she too falls victim to a murderer driven by a surprising and disturbing motive?The Corpse with the Silver Tongue is the first in the Cait Morgan mystery series, a classic whodunit series featuring the eccentric Professor Cait Morgan.

What listeners say about The Corpse with the Silver Tongue

This book was read by the author. Usually I am very wary of authors reading their own books. In this case, Cathy Ace did a good job getting all the sarcasm and nuisances of her writing out there perfectly.

To me this was a slightly shaky first book in a series. The best parts of the book are when the author is dealing with areas she knows well--Wales and Vancouver--places she is living or has lived. The trouble for me was that this is a destination mystery set in Nice, France. I know Nice very well and the "foodies" view of Nice misses the mark. The story could have been set anywhere--the place value of the setting was lost on me. I kept saying no no the character wouldn't have eaten there...they wouldn't have missed this or that. If you don't care about actualities and realities of Nice and the French Riviera then the book is entertaining.

Be forewarned --there is a great deal of talk about eating and food in the story. The character is always hungry. She also has the attitude of "if you don't have anything good to say about anyone come sit by to me"--this can be funny but also can be very taxing after awhile. All these quibbles aside I think the series has great potential
and I plan on listening to the next book.

The Mensa-Member-Genius heroine is in a delightful country for a handful of days & accepts a dinner invitation from a man she hasn't seen for years and completely despises. (Why?) At dinner with her host and several other guests she has never seen before, the host drops dead into his bowl of escargot, and she is immediately Chief Suspect. (Why?) Later, surrounded by the other suspects, a glass of beer appears out of nowhere when she is alone, so our Genius gulps it down. (Why?) When she subsequently wakes up in a pitch-black tunnel with a bad headache, she is groping her way out when she pauses briefly for a "Wakeful Dream" and presto! realizes the identity of the murderer, and also (gasp) that she herself is In Danger! (What?) While all of this goes on, she mutters (un)witty little asides to herself mentally. A thoroughly annoying heroine, equally unlikeable cast of characters, farcical plot. The synopsis was the only good thing about this book. Why, oh why, did I select it?

Ugh with the pitting of women against each other.

To be fair, I didn't make it far into the book... The performer was wonderful, I really liked her style and I was so very excited to find this series as I love a brilliant female protagonist but as we wade in we are treated to stereotypical pitting of female characters against the other and I've had enough. To me, it is too easy a trope.

If you could sum up The Corpse with the Silver Tongue in three words, what would they be?

I enjoyed getting to know Caitlin through the author's descriptions and voice. The performance was outstanding.

This book was the perfect accompaniment to my long commute. The story held my interest and the narrator's voice was charming.

This was an okay book with an interesting plot and characters. What annoyed me was the ending when the lead character and the chief of police went back and about who would wrap up the plot. You tell him, no you tell him. Really you want me to tell him? At that point I almost gave up on the book.