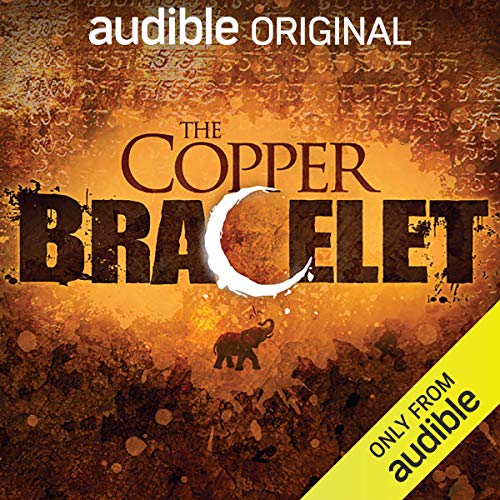 A peaceful picnic in the French countryside explodes in violence. A mysterious assassin hisses a deadly threat. And events are set in motion that could propel India and Pakistan down the road to nuclear confrontation.

Two years after the events of the Audiobook of the Year - The Chopin Manuscript - former war crimes investigator Harold Middleton and his Volunteers once again must crack a secretive conspiracy that not only threatens their lives, but the stability of the world. Their race against time will take them from London to the U.S. to Russia and beyond. And at the heart of it all is one question: What is the secret of the Copper Bracelet?

Sixteen of the world's greatest thriller writers collaborated on The Copper Bracelet. Once again, as he did with The Chopin Manuscript, Jeffery Deaver wrote the first chapter. Then, each successive author wrote a chapter in turn, finally returning it to Deaver to complete this thrilling sequel.

"This was like playing on an all-star team, and all the hits were home runs." (Lee Child)

"A feast for the senses, The Copper Bracelet continues the standard of excellence established by The Chopin Manuscript. Action, intrigue, suspense, they are all there. Another certified no-question-about-it-winner from a remarkable collection of talent. Bravo." (Steve Berry)

"What a blast to collaborate with some of the greatest suspense writers around on the thriller event of the year." (Joseph Finder)

"I can't think of a more enjoyable writing experience in my twenty-five years of being a fiction author than writing The Copper Bracelet and its predecessor, The Chopin Manuscript. We writers spend way too much time by ourselves in dark rooms, and it was a delight to emerge from the cave and hang out, so to speak, with my peers. I have to say that I sat down to read the manuscript with more than little trepidation. I needn't have worried. I was blown away...[and was] fascinated to see how a group of authors with vastly varied writing styles and approaches to creativity produced such a cohesive thriller with a relentlessly fast-paced narrative. (And, okay, I'll admit, I got a voyeur's kick in seeing how my talented co-authors ply their craft.)" (Jeffery Deaver)

What listeners say about The Copper Bracelet

I have so many comments on this book; I must resort to bullet points

NEGATIVES:
~Some of the authors go over the top trying to make their splash, and in this case it ruined the story

4. Jim Fusilli: Tries to put the story on track, does a good job
4-Stars

7. Lisa Scottoline: TERRIBLE! She basically ruins the entire effort! I am glad I had a chance to see how bad an author she is before ever purchasing any of her work.
0-Stars, actually negative!

8. David Corbett: Tries to recover, does a good job
4-Stars

9. Linda Barnes: Continues on Corbett's save and does so nicely
4-Stars

10. Jenny Siler: I like what she did, builds on recovery and adds intrigue
5-Stars

11. David Liss: Continues with story line and does a good job
4-Stars

14. Lee Child: Gets the story rolling to its climax
5-Stars

Overall I can't recommend it.

Lisa Scottoline should have been kicked out of the process after reading her disaster.

I am not sure if I would listen to a third effort. I would probably wait to see if the reviews were good prior to purchase.

Phenomenal, addictive, interest-grabbing from the start and steams along at a steady pace. This book is incredibly well written and Alfred Molina is brilliant.
I have lost a lot of sleep listening to this book that refused to let me turn it off.

The only downside is I have to wait another year for more.

Glad I got it!

I had to write a review, since my impression is different than some of the others here. I downloaded at the recommendation of a friend and really enjoyed it. I agree with the reviewer who liked getting every author's best effort. Each chapter has a story arch within it, which keeps the pacing going, and yes, each chapter ends with a cliffhanger the next author has to deal with, so that's fun! The story is complex, but no more so than a John Le Carre book! And the reading by Alfred Molina is very entertaining. He gives it nice texture. I would and will recommend this to others!

I enjoyed listening to this book very much. It helped me make a long drive very enjoyable. My only complaint was it was alittle hard to keep up with all the changes but good plot and very well narrated.

As Good As The Chopin Manuscript

Another terrific effort by the series of writers. It's like a relay race with the baton (plot) being passed on and changed by each contributor, but with no idea where the finish line will be. Of course, there are improbable plot twists, but that's the same in many novels and movies of horror and intrigue. You just suspend your disbelief and plow ahead despite any confusion because the story and characters just propel you along. Molina is a superb narrator. The interview with him about the book - in a separate, free download - shows his intelligence and humility. I can't wait for the next in this series!

Not as good as the first one. I couldn't stay interested. Did not enjoy the reader - at first, everything sounded the same, then he got a little better.

I thought the book was worth the listen. The book seemed to flow seamlessly, even with all the writer's differing styles. The plot and story line was silly, but entertaining if you like secret plots and teams of experts trying to prevent world domination by the bad guys. Kinda like a Pinky and the Brain cartoon; well, maybe not that bad. If you don't expect much more than that then go for it

Better than 'The Chopin Manuscript'

At least one person complained about Scottoline's chapter. It was just as good as the rest, if a little short. Maybe they didn't like what happened.

On the whole the book was better than "The Chopin Manuscript." It was just as well-written but more cohesive and had a better plot.

As always, Alfred Molina's performance was OUTSTANDING. If you want to hear him at his very best though, listen to "Treasure Island."

I enjoyed the book and I think this multi-author experiment is working out well.

I'm having a difficult time understanding the negative reviews of this book. I thought this book was better if not just as good as the Chopin Manuscript. I felt each chapter was well written and complimented each other wonderfully. In addition, Alfred Molina was outstanding as the narrator just as he was with the Chopin Manuscript. Yes the beginning introduced many characters. However, once you understand the players it is a thriller that keeps you engrossed until the very end.

Where does The Copper Bracelet rank among all the audiobooks you’ve listened to so far?

High, no doubt. The subtle change in the feel of the story as the authors change is wonderful.

What other book might you compare The Copper Bracelet to and why?

Nothing I've heard or read to date.

Have you listened to any of Alfred Molina’s other performances before? How does this one compare?

He is a marvel. His "females" are done expertly. Not easily accomplished without becoming silly or absurd, he's a master narrator.

Same as my headline "Just when you knew..YOU DIDN'T"

Couldn't help wonder how much the authors deliberately and in good humor took their sections totally off in another direction of the previous one just for the hell of it LOL, it all worked beautifully.

I was looking forward to listening to this book backed up by so many famous writers. It turned out to be a total mess where each writer tries desperately to continue the line of thought of the previous one. You could certainly see the joints and after a while I lost interest in the characters and what happens to them, never mind trying to understand what is going on!They were also many factual inconsistencies, as if the writers could not be bothered to read properly what went on before. Even the fact that Jeffrey Deaver wrote the first and last chapters couldn't save the day and in my opinion it should remain as an experiment not to be repeated.

Truly fantastic book written by some of the world's greatest thriller writers. Alfred Molina gives a great performance although I found his accents especially the American one very annoying, and I'm British. That said I will be looking forward to another installment of Harold Middleton and The Volunteers.