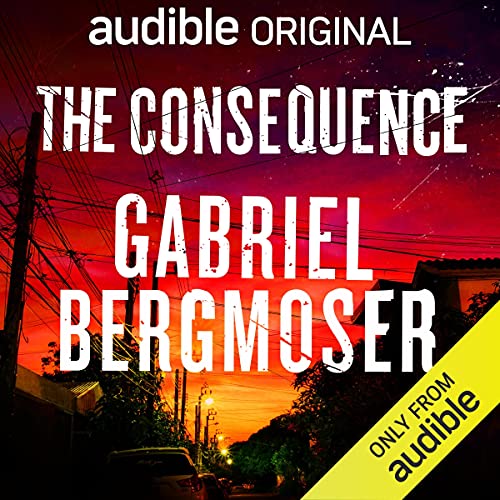 To rogue ex-cop Jack Carlin, running a thug out of town and giving his stolen money to a kid struggling to escape the criminal lifestyle is all in a day’s work. Until it turns out the money belonged to a dangerous drug cartel seeking revenge against anybody who might have been involved in taking what was theirs.

With his act of charity ending in bloodshed, Jack won’t let the killers – or his guilty conscience – go unpunished. But how far is he willing to go to enact his own revenge plan? And what happens when the consequences start to hit a little too close to home?

From the best-selling author of The Hunted, The Consequence is a tense, darkly funny thriller about the limits of taking the law into your own hands.

What listeners say about The Consequence

a good short story starring Jack Carlin. great Aussie character who is an ex cop still fighting crime in his own way.

This was one of the few good books in the freebie section so far that was worthwhile . Fresh writing, good plot and excellent narration.

hang on every word.

loved it! was hooked from the first sentence.
amazing story.
great performance defiantly did the master piece justice.

The Consequence is a wild ride through Melbourne’s underworld as told by the enigmatic character of Jack Carlin.
Gabriel Bergmoser is one of Australia’s great new story tellers. And this story fits nicely between his brilliant novels The Hunted and The Inheritance.
It’s dark, funny and downright terrifying at times.
Greg Caine’s narration is flawless, giving life and richness to an array of characters.
Keep an ear out for a senior citizen criminal for some fantastic moments.
This is a terrific story.
As told in the style of a mate recounting it like around a campfire, at the pub or in the passenger seat with you on a long drive.
Congratulations to all involved.
Thoroughly enjoyed it.

Great story and characterisation and the narrator really brings them alive. It’s a shame it was under 4 hours as was really enjoying being in their company.

I hope Gabriel brings Jack Carlin back and keeps Gregory as the narrator as would love to hear what happens next to him.

Also really want to go to Lilydale and drink in the pub on the platform! You’ll understand once you’ve listened.

An engaging thrill ride of a novel

Expertly narrated by Gregory Caine, Gabriel's latest novel on audible is masterful. The gripping story and gritty, realistic characters forcibly transport me to their world.
This is a must listen!

Such a well written, fun and engaging story. Full of drama and action, it perfectly intertwines emotions from the past and the present. Would recommend to anyone and everyone who has a good stomach for a bit of gore.

Gives an insight in the drug world in Melbourne. Quite good characters .,with good a storyline.Narration easy fine because of storyline language understandable.

I really tried ans stuck to it until the end but it just didn't catch my interest at all and was boring.

Started off OK, but by the end we were just confused about the whole story. An unlikeable ex cop interferes where he shouldn't and gets his only friend killed..... for what?? Listened with my husband and neither of us could see the point of the story.

Dark, seedy, gritty. An audiobook that transports you to places and times, leaving you as a fly on the wall to the utmost of the underbelly. The narration was emotionally evocative and captivating.

Didn't finish. Quickly devolves into excessive foul language, to the degree that the style no longer enjoyable.

About an ex- cop who
is trying to get his life together. I did not really like or rather enjoy the book.

Enjoyed a couple of months ago, though it's one of those reads that doesn't stick around too long in the memory banks.

I think I was just a little less than totally convinced about the motivation of the main character, Jack Carlin. (Family and an awkward, fractured relationship with daughter, a druggie.) That said there were some great scenes in the book, particularly the opener when Carlin tries to get some information from a scumbag.

Carlin has good intentions as well as his secrets. Unintended (fatal) consequences result from his benevolence. Cartel hitmen, corrupt cops, the local criminal hierarchy and untrustworthy friends all cross paths in an entertaining fast-moving novella.

It has whetted my appetite for more from this author. His full length works, The Hunted and The Inheritance sit on the TBR pile. I do like gritty Australian crime fiction.