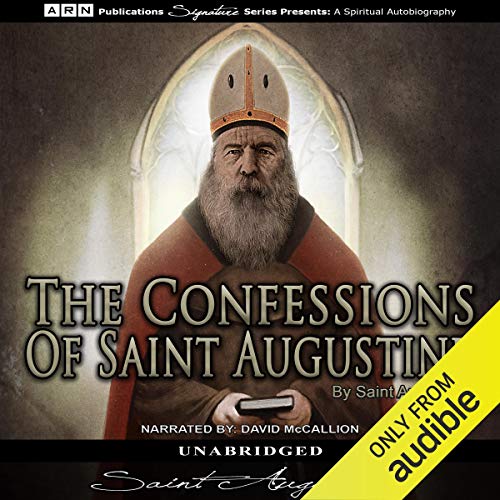 The Confessions of St. Augustine

The Confessions of St. Augustine

Written by Saint Augustine of Hippo, Confessions is the saint's autobiography that features 13 books that detail his early life and his conversion to Christianity as a result of the sin that he had incurred in his youth. Throughout the series, he also delivers his philosophical ponderings and ideas on theology, and it becomes evident that each event that has occurred in his life has had something to do with religion, as Saint Augustine is able to bridge the connections between these two very important topics. His sinful ways, he explains, came to an end when he traveled to Milan, where he realized for the first time that Catholicism would be the answer to his seemingly interminable quest to find freedom from sin.

While the first three quarters of the book detail his youth and his journey toward God, the last quarter of the book is really his attempt to encourage people to follow in his path. He aims to inspire all who hear Confessions and convince them that though they may have sinned in their lives, they can always make a return to God. Saint Augustine closes with a very thought-out and detailed analysis of Genesis and the Holy Trinity.

I absolutely love this book. A great narrator. True insight into the nature of sin and regeneration. Would recommend this to anyone willing to become accustomed to the old English. Go in with a dictionary.

Deeply profound and most beautiful. Full of the sweetness of God's truth. May God grant me the level of esperitual awakening and understanding that Saint Augustine had.

For anyone interested in the history of the Christian church, this book is a must read. Not only will readers and listeners learn a lot about the early days of Christianity, but many of Saint Augustine’s life lessons can be transferred to present day, meaning that each read or listen will bring new things to learn.

Because this book is written in “Old English”, listening to the audio is highly recommended rather than simply reading it, which can be quite challenging. The proper enunciation of the narrator helps to communicate Saint Augustine’s ideals the way it was intended to, ideals that are important to anyone who follows the Christian faith.

David McCallion really does a wonderful job not only with his dictation but also his pace, and pronunciation of words making the text easier to understand, which is key when reading a text that has this much history behind it. Overall this is a great book to add to your collection and a very delightful listen.

This is the first time I've attempted to read Augustine.

I absolutely hated this audio book, the prose seemed way too archaic and I was extremely bored throughout it. After about two hours I gave up thinking life's too short to continue with this. At first I blamed the translation, but eventually I got the Simon Vance version and wanted to give it a second chance. With the Simon Vance narration, the book seemed lively and wonderful. I came back and relistened to parts of this one and discovered that they appear to be the same translation, how could it have been so tedious before and wonderful this time?

The problem is the narrator, he reads with a weird cadence, almost like this is a prose poem (which it isn't) and he has weird breaks in the lines (frequently mid line), it's almost like he's reading one line at a time from a sheet and breaks before the next like regardless of the actual punctuation. The constant rhythmic reading almost lulls me to sleep. It makes the already archaic prose seem even more ancient. In the end, this is just a bad reading (for me at least).

Glad I gave this a second chance with the Simon Vance version, I'm about 1/2 done and loving it this time. Make sure you listen to the full 5 minute sample before buying this version, the reading isn't obvious at first but give it time.

Would you listen to The Confessions of St. Augustine again? Why?

I will listen to this over and over. So many profound lessons and key`s to unlock oneself from the mire of sin.

Very well read by him. It comes to life and you can feel the words, and one speaking.

A Landmark Text and a Fitting Narration

That every thoughtful and thinking person should read this work goes without saying.

Fortunately, McCallion's narration does the work justice. He avoids pretension and over-dramatization, and captures both the personal tone and gravity of Augustine's treatise.

Like many works of this depth, where every phrase is weighty, I find it best to listen at slightly less than normal speed to allow the meaning to sink in.

Very inspiring book! Those who are religious and those who are not would be able to relate to St Augustine's story. Reader is excellent! Definitely recommend it!

The content of the book is beyond genius. Essential for Christian Theology.

The depth and honesty of the reflection by Augustine.

Who would you have cast as narrator instead of David McCallion?

struggled to finish it. Old English translation that was not helped by Augustine's literary style.