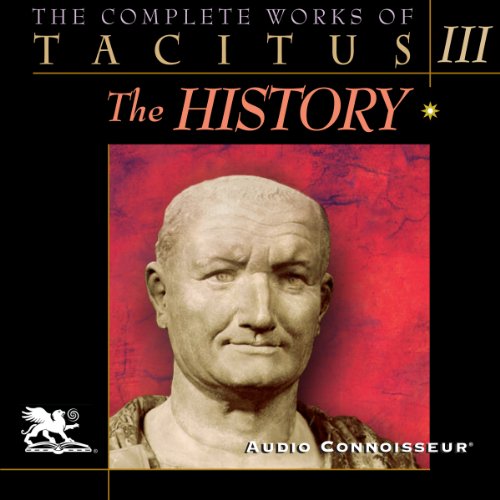 The Complete Works of Tacitus: Volume 3: The History

In all of Roman history there was never a more turbulent year than A.D. 69, the ill-omened "Year of the Three Emperors". By some miracle, the greatest historian of the age, Tacitus, was able to chronicle those momentous events in a work he called The History. In its pages are some of the most memorable events of Roman history described in some of the most intensely passionate prose ever devised. Tacitus was a genius of the highest rank and his searing epigrammatic style has never been equaled, nor put to greater use.

The History opens with the events following the assassination of Nero. Galba, an elderly senator of noble lineage, is the first to claim the crown. But his reign is short...only one month. Civil war immediately breaks out. Defying him is the rakish Otho, an aristocrat of singularly corrupt morals, both in his public and private life. Since the troops favor him over Galba, they murder the old emperor and elevate Otho. But Otho, in the mistaken belief that his troops have deserted him, cannot keep the throne in the face of Vitellius' emerging challenge and he commits suicide rather than face war. Vitellius, as corrupt and weak as his predecessor, is challenged in his turn by a successful general who has been proclaimed emperor by his own troops in Egypt, Vespasian. As civil unrest spirals out of control in Italy, renewed war breaks out in Germany, Illyria, and Judaea. As it turns out, Vespasian is the only man who can command the kind of respect and loyalty to keep the tottering empire on its feet.

This production uses the famous translation by Church and Brodribb, considered the finest in the English language.

The Complete Works of Tacitus continues in Volume 4 with three short works: "The Life of Agricola", "Germany and its Tribes", and "The Dialogue on Oratory".

What listeners say about The Complete Works of Tacitus: Volume 3: The History

As another reviewer said of Volume 1, this is tough going! Best to have a more-than-passing interest in classical history and some background in the Roman Empire's first 100 years. But if your interest is high and your background solid (and you have a little time and patience to spare), this text and narration can be an amazing experience.

"The History" covers the period from June of 68 to November of 69 A.D., famous or infamous as "the year of four emperors." Following the death of Nero, who left no heir, various factions and leaders of the immensely powerful Roman legions discovered that they didn't have to be in Rome in order to force emperors on and off the throne.

In quick succession the emperors Galba, Otho, and Vitellius had their five minutes of fame and power before either self destructing or being forcibly destroyed to make way for the next candidate. Finally, in the fall of 69 forces loyal to Vespasian, commander of the legions fighting in Judea, proclaimed him emperor. After several months of civil war, Vespasian was officially acknowledged as emperor, ushering in a period of stability (always remembering stability is a relative concept).

There is very much a you-are-there quality to this narrative. The historian Tacitus (c.56-120) was a Roman noble who acknowledged owing his advancement to Vespasian's younger son, the Emperor Domitian, so his personal interest in the story is manifest. However, Tacitus has an admirably modern approach that at least attempts impartiality, and there are moments of stunning oratory that also ring very modern.

That said, it's a reading to take in small bits and come back to again and again. There's no way to remember or keep track of the long strings of Latin names, many of whom were drops of water in the sea of history. But if you relax and lose yourself in the excellent translation and Charlton Griffin's trademark ringing narration, growing familiarity can pull you in to a fascinating time (that you will probably be glad to be hearing about rather than experiencing).

If you're like me and tend to absorb a lot of history as a result of reading novels, many of the characters in Tacitus' History (especially Vespasian) are prominent in the military historical novels by Simon Scarrow. And in one of those strange coincidences, shortly after I started listening to Tacitus, I happened across a novel called "Daughters of Rome" by Kate Quinn that covers the timeframe and some of the characters in Tacitus, but from the point of view of four fictional Roman noblewomen who in Quinn's version have more than a little to do with how things turned out in the end. It was a bit of a leap from the sublime to the ridiculous, but I enjoyed Quinn's book (which is less of a romance than its packaging suggests) and I admit it provided a compass that helped kept me on track and get more real value from Tacitus.

a fascinating and compelling history

Tacitus' account of the civil war that followed the death of Nero is our best insight into this era. The narrative can be confusing at times, but it is also fascinating. Of particular intetest was listening to Tacitus' assorted accounts of the origin of the Jews.