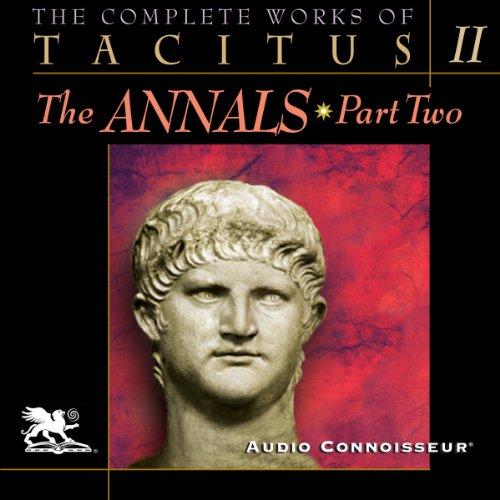 The Complete Works of Tacitus: Volume 2: The Annals, Part 2

The Annals, Part 2 picks up in the year A.D. 32 with the increasingly menacing and tyrannical behavior of Tiberius. With hundreds murdered or driven to suicide and many more in exile, Tiberius descends steadily into growing lust and debauchery on his private estate on the isle of Capri. Overseas, Rome is victorious in her struggle with Parthia, and as Tiberius is being smothered to death in A.D. 37 by Macro, peace at last comes to the eastern frontier.

The events of the year A.D. 47 open with Claudius as emperor. The machinations of his wife, Messalina, are laid bare, along with her debaucheries. When her mischief finally gets her killed, she is succeeded by Agrippina the Younger in A.D. 49. Her wiles are no less mischievous and she angles to get her son, Nero, in line to be emperor. The reign of Claudius finally comes to a close when he is poisoned by Agrippina amid uprisings in Britain and Germany, and renewed hostility in the east.

Tacitus is most famous for his amazing descriptions of the reign of Nero, one of the most ruthless and sadistic monarchs of all time. It is all superbly described in some of the most beautiful and exciting prose ever written. You will hear how Nero corrupted everyone in his reach...and murdered those he could not corrupt. Learn how he had his own mother killed, how he reacted to the great fire that destroyed Rome, and how he pitilessly built his enormous new palace on the charred ruins of the city while everyone around him lived in squalor. Meanwhile, tumultuous events in the provinces are reported in great detail and with penetrating insight. All in all, The Annals are one of the great miracles of historical writing, and place Tacitus on a footing with the greatest historians of his or any other day.

This production uses the famous translation by Church and Brodribb, considered the finest in the English language.

The Complete Works of Tacitus continues in Volume 3 with The History.

What listeners say about The Complete Works of Tacitus: Volume 2: The Annals, Part 2

Great for your Rome historian.

Packed with great information! This book tells so much about Rome, I am ready to start it again.

Uninteresting - Not an "Easy Read"

I thought I could learn some interesting Roman history, but there is little of interest in the way this book was written - my fault for not getting the author. You'll hear a number of different full names in one sentence, most of whom the average person has never heard of. It makes this very difficult to follow. I quit listening after the first 90 minutes...

a compelling history of Rome

Tacitus' history offers a great insight into the sordid reign of the Roman Emperors, filled with plots, conspiracies and juicy scandals