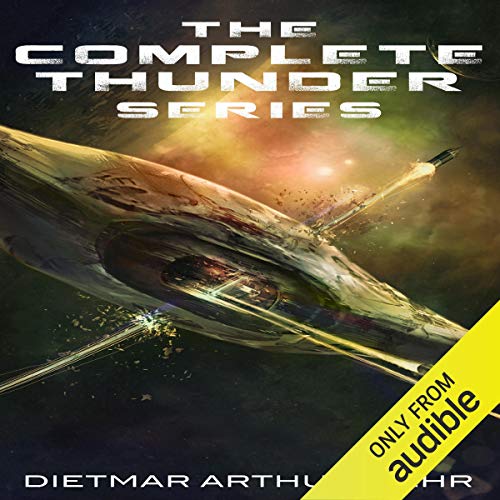 This audiobook contains the complete Thunder in the Heavens series (Thunder of War and Thunder of Vengeance).

The Tyrell are a race that love to fight. The more difficult the fight, the better they like it. Every race they find is given the same level of technology and a specific amount of time to exploit it before the Tyrell come back looking for a fight. Humanity is warned by another alien species that the Tyrell are coming, and the race is on to build an Alliance of races strong enough to stand up against an empire whose expansion has been relentless.

Cate Harrow and Gort Eagleton are two officers who might be good enough to beat the Tyrell if their own incompetent leadership can get out of the way and if their alien allies don't stab humanity in the back.

This fast-paced, action-packed military SF series looks at both sides as they play the grandest chess game of all.

What listeners say about The Complete Thunder Series

I am keeping this short, but I have to echo many of the other comments here. The book felt rushed especially at the end. I would have liked a couple of extra books to develop many of the story lines but to be fair at the same time i liked having a story start to finish over one listen. That said definitely would recommend to someone who enjoys military scifi and will look for more from the author.

On the performance Luke Daniels is great but I kept hearing characters from another series he did that I just finished re-listening to.

A little rushed at the end, but a great story. Good reading all the way.

A fairly typical story for it's genre. Very predictable with unimaginative aliens. However, the plot and performance are good enough to sustain interest.

I bought because of Luke Daniels...it's an ok book

Kind of weak plot line but the I liked several of the characters. It needed about 7 or 8 more chapters to add depth to the book. I will probably pass on next book but glad I listened to this one.

I liked the characters . they seemed believable and sincere. the space battles where nerdy enough to be fun.

Pretty Silly - Not Terrible - But Nothing Special

This was a pleasant listen. Nothing memorable, and pretty silly in most respects, but pleasant.

Wish there Was More

Would you consider the audio edition of The Complete Thunder Series to be better than the print version?

I cannot say as I only do Audiobooks. Luke Daniels does a great job on the narraration though.

I liked the idea of the alien race that loves to fight and provides the tools to other races so they can prepare for the upcoming battle.

The final battle royale at the Tyrell homeworld.

Yes but not realistic for me. Though I did stop a book I was in the middle of just to listen to this one when it was released!

I am a fan of this author and his other works so have been waiting patiently for this series to come to Audiobooks. It is a pretty straight forward storyline without too many surprises, mostly point and counterpoint. Would have liked it if there was more to the story now that I am finished with it.

For Once a Complete Story

Where does The Complete Thunder Series rank among all the audiobooks you’ve listened to so far?

This is one of the most enjoyable listens I have had in months. No stopping the story
to wait for the next in the series.

Luke Daniels you rocked this book.

This book is pretty bad.
It is a shame because the original story line and plot are interesting and enticing. The characters are rather shallow but you pretty much expect that in a space opera.

But the ideas and concepts story development are terrible. There are these incredible leaps of faith made, only by the bad guys, where the Earth Alliance uses one specific tactic or fires a single weapon and the Tyrel baddies extrapolates their theory as though they were listening to the same omniscient narrator we are. It was really annoying.

Luke Daniels was also not at his best; he was one of the reasons I was willing to try it. Who knows, maybe he realized how lame the story was and lost heart.

Don't waste your money or credits.

Straight-up, Dietmar Wehr's writing itself was very much above par and Luke Daniels narration even more so. Except for the astrogation calculations, most of the other Sci/Fi elements; FTL travel, kinetic and fission weapons lacked much in providing design details. There was significant detail provided when outlining astrogation paths and maneuvers but these sections were too heavily relied on during the many battle scenes. The two primary protagonists were extremely talented and professional in their positions but lacked much depth outside their roles and came off a bit two-dimensional.

Still, for anyone who enjoys strategic and tactical space planning, there's plenty for you to find in this story.

Felt like it was very slow and focused to much on a specification of space wars and not enough on story, to much military discussion...

The characters took a while to get into, but the story was gripping. The tactical and logistical elements were exceptionally well presented. I am equally impressed with what was left out, as I am with what went into this book.

If you like these types of books (space adventure etc) then this is worth a credit for sure.

Initially cautious, I thought I'd give this a chance, as I like the narrator's voices. Disregarding any link to voices he has used for other book series, I listened anyway, and confirm that the storyline is well worth the listen and proved to capture my attention. 5/5

This was an easy to listen to book. It was not one of those books that you could just not put down, but, that said, it was worth the credit.