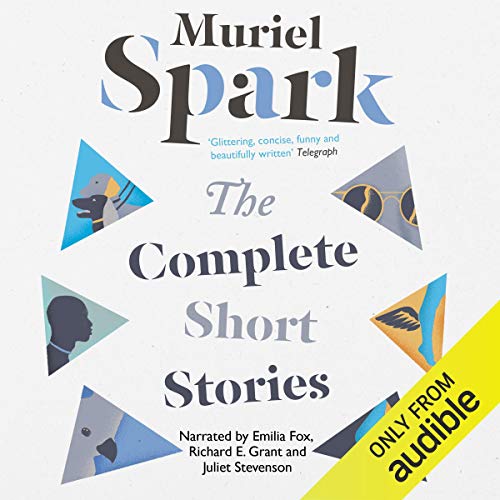 From the cruel irony of A Member of the Family to the fateful echoes of The Go-Away Bird and the unexpectedly sinister The Girl I Left Behind Me, in settings that range from South Africa to the Portobello Road, Muriel Spark coolly probes the idiosyncrasies that lurk beneath the veneer of human respectability, displaying the acerbic wit and wisdom that are the hallmarks of her unique talent.

The Complete Short Stories is a collection to be loved and cherished, from one of the finest short-story writers of the twentieth century, rediscover it on the 100th anniversary of Muriel Spark's birth with outstanding performances by Emilia Fox, Richard E. Grant and Juliet Stevenson.

What listeners say about The Complete Short Stories

The characters unlikeable,the stories tedious and narration oh so very boring. I persisted for several hours but life is too short. Back it goes

Why are there no titles of each chapter? I cannot see which story I am listening to.

A must for Muriel Spark fans!

I'm not sure how one goes about reviewing a collection of short stories, especially one as comprehensive as this one, with over 40 stories which have no common theme or motif. What this book demonstrated most clearly to this recently minted Muriel Spark fan was just how creative and imaginative this writer was. Her novels are certainly brimming with unusual characters and circumstances, but in the short story format she also allowed herself to play around with different genres, throwing in plenty of fantastical and paranormal elements. I can't say those were my favourite kind of stories, as I tended to favour those which had more in common with the Muriel Spark I adopted after listening to Memento Mori and Loitering with Intent, to name just those two. Quite a few of the stories took place in the African continent, and I supposed the author must have lived there at some point. A quick Google search and an article entitled "The First Half of Muriel Spark" by Roger Kimball yielded the following information:

"Muriel Spark’s sojourn in Africa was the opposite of pleasant: a failed marriage, poverty, little prospect of leaving before the end of the war, few friends with literary interests. (Doris Lessing was living someplace in Rhodesia at the time, but the two writers did not meet until many years later.) Nevertheless, she continued to write, poems mostly, and collected material for some of her best-known stories. Africa, as much as Edinburgh, formed her as a writer. It also made her an adult. It was in Africa, she says, that she “learned to cope with life.” “It was there that I learned to keep in mind … the essentials of our human destiny, our responsibilities, and to put in a peripheral place the personal sorrows, frights and horrors that came my way.”

Horrors there were aplenty. The racial situation was barbaric. The Afrikaner women with whom Muriel mingled were full of smug stories about how uppity blacks had been “fixed.” There was, for example, the farmer who discovered a young black boy standing outside the window of his wife’s room, peeping in at her while she breast-fed her baby. For this violation, the farmer shot the boy dead. The woman who told Spark this story only lamented that the farmer had been sent to prison for three years for killing the boy. “I was unable to speak,” Spark reports. “I simply stared at the woman.”"

Muriel Spark obviously used material from real life as creative fodder; the above true account was fictionalized by her in the first story in this collection, The Curtain Blown by the Breeze, one of my favourites because it demonstrates all the strengths which make me appreciate this writer so much: a sense of story with characters that are complex and interesting, an unflinching look at people at their worst, distinguished by a healthy dose of mordant humour.

In all, I'd say I probably fully enjoyed less than a third of the stories, but even those I didn't particularly take to overall had plenty of interesting elements that made them worthwhile, and those I did fully enjoy made for an excellent experience. A must for Muriel Spark lovers and those interested in exploring a writer with plenty of range.

The collection comprises Spark's complete opus; so the quality of stories is variable. The readings are brilliant — consistently compelling.

Patchy, but the best stories are good

Spark's novels are often elusive and enthralling but too many of these stories lack enough imaginative depth to make this collection really special. Having said that, there are some great stories to be found here amongst those of lesser interest. The early stories, largely set in South Africa at the time of WW2, are among the best.

I did finish the collection (though the 17 hours felt more like 17 weeks). I had read and enjoyed The Prime of Miss Jean Brodie and opted to give this a try. I wish I hadn't.

Some of the stories were interesting. Some had a lovely use of language. Most were rather bad. Some were really more like an outline of a story idea with no characterization (not her strong suit anyway). Some were just so darned predictable that a paragraph in I could tell what the "twist" was going to be and a good fair few were just rather pointless.

Unless you are a die-hard Spark fan, I would really give this a pass.

The narrators, however, did a yeoman's job with it.

I enjoyed this collection of stories. Well-written, as one might expect, and often full of humour pocking fun at human vanity and snobbery. The stories are varied and encompass such themes as crime, the supernatural and the cares of the human heart.
The narrators are all accomplished performers of audio books and add to the pleasure

I only knew Muriel Sparks from Miss Jean Brodie and am not generally a fan of short stories, but was taken by the prospect of readings by Juliet Stevenson, Emma Fox and Richard E Grant. I am so glad – the stories have great range and the narration is absolutely top notch. Some of the stories are a good 2 hours long. All are atmospheric and I loved Sparks’ sly wit.

Wonderful delivery especially by Juliet Stevenson and Richard E Grant who narrated these stories beautifully. A great range of stories about the quirky corners of human behaviour with intrigue, wit and pathos.

a funny entertaining collection of stories. I loved the readers, the stories and the content.

It is ridiculous that in a compilation of "The Complete Short Stories" there is no indexing other than chapter numbers: Chapter 1 - to Chapter 53. I can't see how many stories there are; what the titles are; who is reading them, or - most importantly - where they start and where they end. I'm sorry Audible but it can't be that difficult to write a few words to indicate where we find the start of a story. Extremely unprofessional.

The performances are what make this collection unmissable. One is almost "kidnapped" and taken to strange and exotic places, placed in the middle of the action - and afterwards left haunted by the ghosts who still swirl around in one's head.

The accents are amazingly good.

I’m not sure why I discovered Muriel Spark so late, apart from the movie w Maggie Smith, The Prime of Miss Jean Brodie, but at least I haven’t missed her.
MS spent time in Southern Africa and her merciless observations (for the first few) transform into hard hitting short stories which are a delight and well narrated, albeit w an exaggerated SA accent.
For the rest, and there’re over 50, the settings and material are wide and varied and the narration is quality .
It’s a prolific, imaginative, worldly and well constructed collection; often w a humorous wry edge, a twist or an enigmatic line at the climax, that magically allows the “short” story to become complete. MS must have been a sharp witted and entertaining personality !
I really appreciated this anthology, dipping in intermittently, so the stories didn’t run into one another. I’d easily rate this at least equal to the collections of Somerset Maugham and O Henry which feel dated and stuffy.

BTW....don’t miss the Audible version of The Prime of Miss Jean Brodie, this was astoundingly read by Miriam Margolys.

The complete short stories in one volume at least gives the satisfaction of having read all that there is to read. The range of the subject matter is wide - from a childhood in South Africa, to Scotland and Manchester to the sad ruminations of a judge in North London. But the quality of the voice is not that great - one or two flashes of insight, but in the main very pedestrian and at times down-right tedious.

I can’t really think of one of the short stories that I really enjoyed, but can easily recall three that I really didn’t enjoy. Still, its read now isn’t it.

No matter how good the narrators...

are if the stories are utter garbage. Hated it, a waste of time and money.

How to find each story?

I couldn’t agree more with the reviewer who complained of the absence of story titles or indexes. Whilst I can live with this in a collection of, say, 5-10 minute children stories (and even then it’s annoying), these stories by Muriel Spark add up to many hours of listening. I would really like to know what I am listening to, and where each story starts and ends.

Just sloppy. The excellent narrators should refuse to collaborate with such shoddy editing.