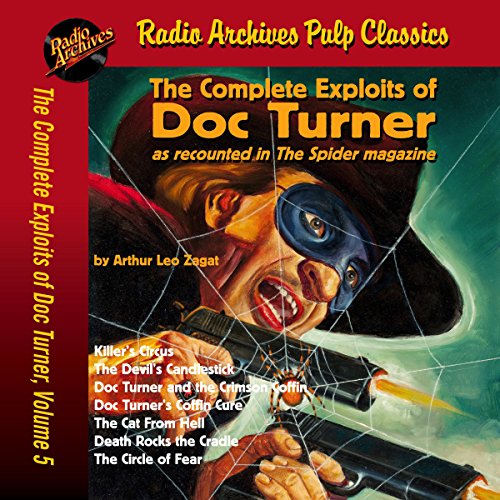 "Doc" Turner was one of the least likely heroes that appeared in the pulp magazine stories. He was a little old pharmacist who ran a drug store in the slums of New York, where just about everyone came to him when they had problems. Oh, and what problems they had! Werewolves and vampires mixed in with extortionists and gangsters. And solve their problems he did, with the aid of his strapping red-headed assistant, mechanic Jack Ransom, and his young stock boy Abe Ginsberg.

These short stories appeared in the back pages of The Spider magazine, a grand total of 70 of them. Every single one can be found in this collection; not a one is missing.

"Killer’s Circus": Doc Turner's little orphan had been swallowed by that crime-carousel - ensnared by a freak who made over humans into his own ghastly image. But the Doc knew a trick - how to make them over again.

"The Devil’s Candlestick": Doc Turner had to act fast when his small assistant was snatched by a fire-bug Fagin who had a fiendish formula for turning boys into human torches!

"Doc Turner and the Crimson Coffin": Into Doc Turner's little settlement drove that terrible hearse with its coffin death-trap for the poor. Only the little druggist could hope to beat this ruthless racket - by making a corpse rise, of its own volition, from the grave!

"Doc Turner’s Coffin Cure": It was the Crusher who had come to Doc Turner's poverty-stricken neighborhood, leaving in his wake human heads smashed to pulp! Only the little Doctor had a way to check that horror-epidemic — by fighting a killer with a corpse!

"The Cat from Hell": Upon the defenseless poor, that awesome feline slayer sprang - leaving unclaimed corpses in its wake. But Doc Turner, who had cured the poverty-stricken living, knew how to unleash the relentless fury of the dead!

"Death Rocks the Cradle": One by one the children of the poor had died - victims of their own tiny hands. But Doc Turner was on the trail of that master of suicide - with a cure made from human blood!

"The Circle of Fear": Death stalked the terrified Russian woman who came to Doc Turner's little store - but Doc had a desperate scheme for wiping out the corpse club that dogged her trail!

What listeners say about The Complete Exploits of Doc Turner, Volume 5