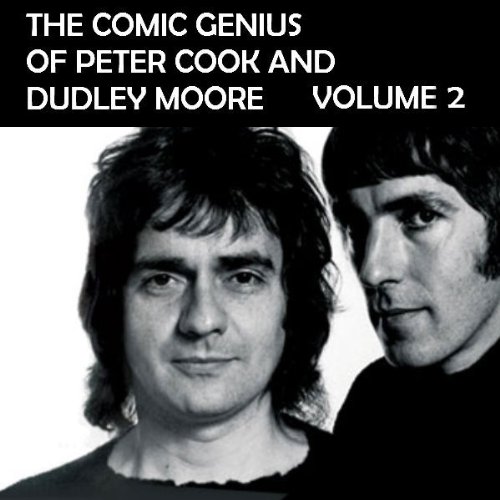 The Comic Genius of Peter Cook and Dudley Moore, Volume 2

The Comic Genius of Peter Cook and Dudley Moore, Volume 2

Peter Cook and Dudley Moore were two of the brightest stars ever to light up the world of comedy. They set standards that will probably never be surpassed. Cambridge graduates who met in Beyond the Fringe, their chemistry produced some of the funniest, most inventive and downright brilliant comedy ever recorded.

They came to wider fame with the TV series Not Only… But Also.

The writing and performances were superb. The show had a variety of sketches, most memorably the so called ‘Dagenham dialogues,’ where, dressed in flat caps and shabby raincoats, in a variety of settings - a pub, an art gallery, a doctors surgery - they spouted absolute hilarious nonsense. Pete played the all knowing bore, while Dud played the more subservient but equally opinionated mate, all the while trying not to corpse at Cook’s frequent ad libs.

Volume 2 (11 tracks) contains yet more diamonds in 'A Bit of a Chat', 'The Wardrobe', and the classic 'One Leg Too Few' (“I like your left leg; I’ve got nothing against that….unfortunately neither have you!").

What listeners say about The Comic Genius of Peter Cook and Dudley Moore, Volume 2

Loved everything about it. The two of them play off each other so well that it is a joy to listen to.