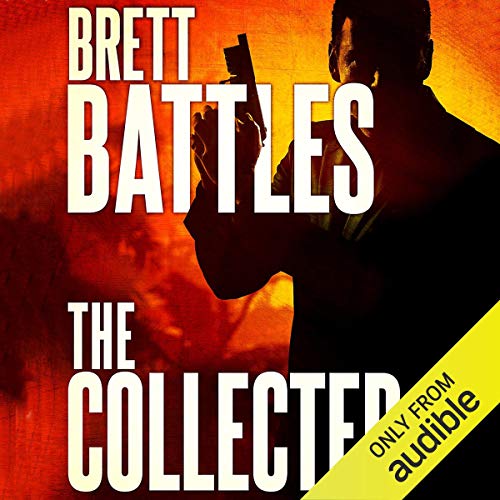 A cleaner’s tasks are simple: get rid of the body so that it will never be found, and make the scene of the kill look like nothing happened.

Rule Number One: Don’t get caught.

With Jonathan Quinn’s career in question, his apprentice Nate has successfully taken on the role of full-fledged cleaner, using Quinn’s name to keep the business working seamlessly in case his boss decides to return.But Nate’s latest job is not what it seems, and he finds himself on the wrong side of a trap.

With Nate suddenly missing, Quinn and his partner Orlando set out to find him, and learn the reasons for Nate’s disappearance are more atrocious than they anticipated.

Another great story in the Quinn Series!

Fast pace book.
Interesting plot.
If you have read and liked other books in the series, than you will love this book too.

If you like this book and are looking for good action books I recommend that your read:

About me: I have 4052 titles in my Audible.com library. I don't write many reviews. I read everything from Young Adult (YA), Espionage, Romance, Sci Fi & Fantasy. I

Another great story in the Quinn series

I have thoroughly enjoyed the progression of this series, and how the characters have evolved. Starting the novel from a different perspective than what I was anticipating was fantastic, and again Brett has put together an engaging, exciting storyline. The ending is riveting!

Scott Brick is a fantastic narrator as usual, bringing that comfort and familiarity of the characters past with him, and makes listening a pleasure.

I highly recommend this book if you have enjoyed any previous ones in the series, or simply enjoy a look into the sub-culture of the espionage/assassin/hitman genres.

Brett Battles never fails to delight. The action keeps moving, the plot is plausible and exciting. Again, this is one for the men or the women. Good 'espionage' stories are hard to come by and all of Battles' books are exceptional. Just buy it! You won't regret it.

Another unique plot in the series!

As usual, there is a "cleaner" issue and you are immediately drawn into a tense adventure. Nate disappears, Jonathan and Orlando investigate, several other operatives are involved, and the only thing they all have in common is the name of a past job.

New to this episode is a cliffhanger ending. As usual I am eagerly waiting to see what happens next.

Scott Brick has become THE voice for these books.

What did you love best about The Collected?

Of course, how is the author going to fix this in his next book and how long do I have to wait to find out.

If you could sum up The Collected in three words, what would they be?

What was one of the most memorable moments of The Collected?

The end was unexpected!!

What does Scott Brick bring to the story that you wouldn’t experience if you just read the book?

I'm a termemdous Brick fan. I have read different genres that I wouldn't have read before just becuase he's the narrator.

Yes. The ending was very shocking...I'll leave it at that (No spoilers)

Not the best in the series but a solid book

Love the characters their loyalty to each other. I also enjoy how Brett Battles incorporates new people to keep the stories fresh. Nate's injuries and survival are getting a little far-fetched, so it is probably time to focus on a different character. Some surprises at the end leave me compelled to download the next book in the series.

What made the experience of listening to The Collected the most enjoyable?

What other book might you compare The Collected to and why?

The Collected could be compared to The Templar. One man wants control over another. The hate is not felt by both men, only one. The Collected has Romono (sic),who hates the men he has kept in the prison because he wants to right the wrongs he imagines were done TO HIM. He is an evil man who will go to any lengths to prove his power is sacrosanct. Quinn knows that Romono is evil but he has no desire to do him harm. The Templar's two men were de Roquefort, who wants the power and Mark Nelle who wants to be a gentle leader of the Knights Templar. Nelle doesn't want to murder and cause mayhem by having all power over men. However, de Roquefort will fight to the bitter end, not caring who or what he has to destroy to have the power over The Knights Templar.

Which character – as performed by Scott Brick – was your favorite?

Nate was my favorite character as performed by Scott Brick. His words were at times not spoken so that other's could hear but being the listener, I did. I was able to feel his anguish and pain when the ice water was thrown on him after he had been whipped. I've experienced the need to get enough air into your lungs and be able to take a breath. Nate's appreciation to Quinn finding him could be heard in his voice. The hate he had for Juntis was powerful. I was able to understand that Nate did not have animosity towards the other prisoners being kept as a prisoner as he was. I was able to hear the men talking through the vents. Nate didn't talk too much but when he did, what he said was important for the other's to hear. Scott Brick was able to bring his personality to life.

The moment that moved me was when Quinn stopped and picked up his friend, Peter, by using a fireman's carry. He did not want to leave him in the prison. He used to run the Office at one time and provided clean-up jobs for Quinn.

The book was full of action and suspense from beginning to end. The book was an easy listen because the book started out good and stayed that way, right up to the end. Another book needs to be written and I hope that it comes out soon. Sometimes I have difficulty reading the last book in a series because it leaves me wanting more. The end reminds me of a weekly show on TV that ends on a high note but I won't know what happens until summer is over and the fall TV season starts. Having Scott Brick as the narrator for all of the books keeps the continuity of the characters seamless. Brett Battles knows how to make the scenes come to life. I've thought about the reality of having cleaner's as described in Battles books and I've come to the conclusion that they are a reality. I'm also quite sure that conflicts would arise. I'm glad to have found Battles books in my search and have read them.

Would you try another book from Brett Battles and/or Scott Brick?

Did Scott Brick do a good job differentiating all the characters? How?

Yes, he did a great job diferentiating betwen the characters.

It is a good entertaining book.

Yes, I recommend Brett Battles all the time! I can't stop listening until I am done with the book!

Scott Brick is Jonathan Quinn in my head.

Is the next book in the series ready yet?