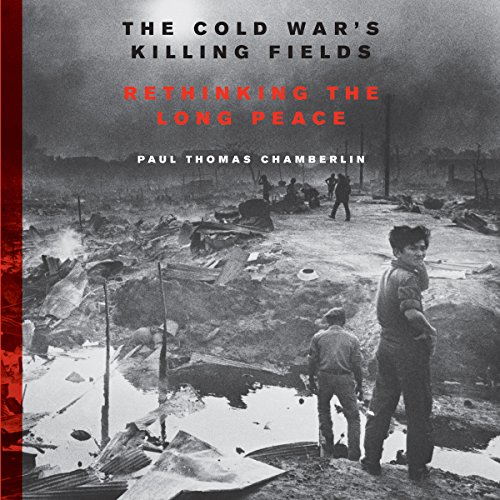 A brilliant young historian offers a vital, comprehensive international military history of the Cold War in which he views the decades-long superpower struggles as one of the three great conflicts of the 20th century alongside the two World Wars, and reveals how bloody the "Long Peace" actually was.

In this sweeping, deeply researched book, Paul Thomas Chamberlin boldly argues that the Cold War, long viewed as a mostly peaceful, if tense, diplomatic standoff between democracy and communism, was actually a part of a vast, deadly conflict that killed millions on battlegrounds across the postcolonial world. For half a century, as an uneasy peace hung over Europe, ferocious proxy wars raged in the Cold War’s killing fields, resulting in more than 14 million dead - victims who remain largely forgotten and all but lost to history.

A superb work of scholarship, The Cold War’s Killing Fields is the first global military history of this superpower conflict and the first full accounting of its devastating impact. More than previous armed conflicts, the wars of the post-1945 era ravaged civilians across vast stretches of territory, from Korea and Vietnam to Bangladesh and Afghanistan to Iraq and Lebanon. Chamberlin provides an understanding of this sweeping history from the ground up and offers a moving portrait of human suffering, capturing the voices of those who experienced the brutal warfare.

Chamberlin reframes this era in global history and explores in detail the numerous battles fought to prevent nuclear war, bolster the strategic hegemony of the US and the USSR, and determine the fate of societies throughout the Third World.

What listeners say about The Cold War's Killing Fields

America is an easy target

The communists labeled America as "Imperialist" for a reason. That's because they wanted to conflate the deeds of European colonialists with America, a non-colonial power (for the most part) although the word itself means almost nothing. They also used terms like "Reactionary" because America was constantly reacting to their provocations. Those darn Yankees!

There would have been no Cold War without the scourge of communism around the world. They just practiced secrecy and obfuscation a heck of a lot better than we did. If the old saying were true that "History is written by the victors," then we need to get better writers. . .or stop this endless handwringing by rearview mirror moralists.

This is an excellent book. There might be some reviews here that talk about "oh, but what about the bad stuff the USSR did." If you want that, see Orlando Fige's social history of Stalinist Russia on this website. The argument is that we shouldn't think of the Cold War as the "long peace" but rather a very violent struggle whose lines cross the Eurasian frontier. Perhaps the only issue I had was that the author seems to lose his way in the Middle East where his argument does not perfectly aline with history (particularly conflicts in Lebanon). Despite that, he circles back around in an excellent conclusion and a discussion of Afghanistan near the end.

This book is full of interesting and useful information about conflicts that are too often overlooked. Each conflict is explained in detail, forming a coherent if at times convoluted narrative of wars at the borders of the super-power conflict. Unfortunately, the book as a whole suffers from a strong anti-American bias.

Most detail is given to describing suffering caused by America and her allies, with very little attention given to the misery caused by the communist powers. Even when communist misdeeds are explained, the author works hard to blame it on the US and her allies anyway. The overall impression one would get is that the communist powers were largely passive in the Cold War, despite their massive body counts. Perhaps this can be explained by the fact that most communist atrocities were committed within states in peacetime (for example, Soviet purges, China's Great Leap Forward and Cultural Revolution) rather than in wars. Where this excuse falls flat is the utter lack of mention of North Vietnamese atrocities committed during the wars for post-colonial Indochina. American and South Vietnamese misdeeds are extensively detailed, but North Vietnamese transgressions like the torture of captives are absent from the narrative.

Overall, I would tentatively recommend this book. The uninitiated will be taken in by the anti-western bias, but those knowledgeable of the Cold War and international communism's crimes will find valuable information here.

The narrator was spot-on, so kudos to him.

Many of the comments mention anti-american sentiment which means this book contains much truth. Great performance and book. highly recommend.

The cover is compelling. However this isn't a photo contest. It is just too flawed and verges on rank sophistry during the Korean War stage. I had to stop at that point. I became nostalgic for Max Hastings' Korean War book. I'm out. Life is too short.

Different look at a familiar history

The struggles of this century emerged from the unintended consequences of the last era, which seems to be the rhythm of history. This book details those struggles from the view of the non-great powers. The long peace also resulted in upshots - technological advancement, globalization, Asian tigers - but conflict & renewed great power competition could easily be the greater legacy. This book does a good job of exploring how this happened.

Good narrative of events, but light on insight

Written with verve and pace, this book nonetheless fails to do much to explain the shifts it identifies, between three phases of Cold War violence.

For instance, the third phase, "the great sectarian revolt", is explained only by reference to Washington's previous campaigns against communism and secular nationalism, and by the Sino-Soviet split. For a global development of such scale and reach, that's an extremely light touch explanation. (Black Wave by Kim Ghattas is a good read on this.) During this section, as well, the connections to the Cold War writ large are tenuous, and hence it loses a bit of its interest - at least if you're already somewhat familiar with the history.

It's odd, given the geographical and temporal scope identified, that there's no mention of the Yemeni civil war (the one Nasser intervened in), or the British intervention in Oman.

Some reviewers have said they think it's anti-American and glosses over rights abuses by the USSR and China. That is not true. Overall it's very straight, and probably a really good introduction to the Cold War period for someone not familiar with many of the key episodes.

To much missing out