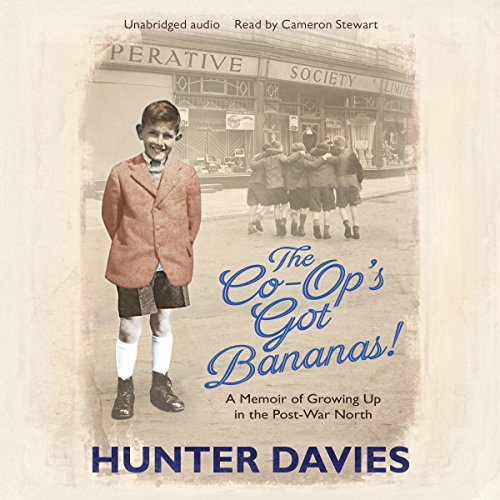 The Co-Op's Got Bananas

Despite the struggle to make ends meet during the tough years of warfare in the 1940s and rationing persisting until the early 1950s, life could still be sweet. Especially if you were a young boy, playing football with your pals, saving up to go to the movies at the weekend, and being captivated by the latest escapade of Dick Barton on the radio.

Chocolate might be scarce, and bananas would be a pipe dream, but you could still have fun. In an excellent social memoir from one of the UK's premier columnists over the past five decades, Hunter Davies captures this period beautifully. His memoir of growing up in post-war North of England from 1945 onwards, amid the immense damage wrought by the Second World War, and the dreariness of life on rationing, very little luxuries and an archaic educational system, should be one that will resonate with thousands of listeners across Britain.

In the same vein as Robert Douglas's Night Song of the Last Tram - A Glasgow Childhood and Alan Johnson'sThis Boy, Hunter's memories of a hard life laced with glorious moments of colour and emotion will certainly strike a vein with his generation.

What listeners say about The Co-Op's Got Bananas

Loved this book, could imagine myself living during that time - brilliant ! Can’t wait to listen to the sequel.

Very listenable and thoroughly enjoyable! Waiting for the post 1960 sequel. 10 out of 10.

Enjoyable for a 50s born person

I learned a lot about 50s Carlisle which is one of my later life places. I enjoyed this very much but I am not sure someone with no knowledge of the far north west of England would get much from it.

Full of interesting detail about life in the thirties to the start of the sixties.

Bounces along at a good pace and great insights into a tough, but loving early life. His progress to Fleet Street is always produced with typical Hunter humour and the actual time spent in Fleet Street gives a vivid documentary of what it was like at that time. I really enjoyed it and looking forward to the follow up which I will now listen to again!

The book was good

I liked the book but found the voice irritating was finding it hard to stay awake.