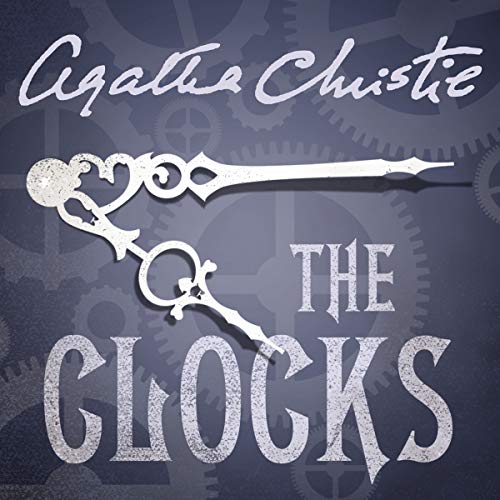 As instructed, stenographer Sheila Webb let herself into the house at 19 Wilbraham Crescent. It was then that she made a grisly discovery: the body of a dead man sprawled across the living-room floor.

What intrigued Poirot about the case was the time factor. Although in a state of shock, Sheila clearly remembered having heard a cuckoo clock strike 3.00. Yet, the four other clocks in the living room all showed the time as 4.13. Even more strange: only one of these clocks belonged to the owner of the house.

What listeners say about The Clocks

The aging Hercule Poirot makes guest appearances as an armchair consultant, but since the other two detectives are quite charmless, this isn't Agatha Christie's most interesting work. Rather disappointed.

Not one of her best

Started promisingly but the deduction was forced and relied too much on deus ex machina.

This book has me gripped from chapter one, I usually listen to a book at night and will fall asleep - I had to turn this one off to get some sleep as the story line had me gripped. - I also loved the change of voices, well done and thank you

Christie does it again

Once again Agatha doesn't disappoint with this cracking read. I found this one a little easier to unfold as the plot went along and I did guess the end but that didn't detract from the overall enjoyment.
Audio quality was good and the narration up to the usual expected standards.

Agatha Christie at her best

I have recently been re-listening to Agatha Christie novels. I am especially a fan of the great Hugh Fraser reading the books. In 'The Clocks' you are left guessing until the end. I recommend this!

This is my second audible book. I started listening since I don't have much time for reading novels. At first I was still doubtful as to whether listening a book would give the same feeling as reading a book, but after this time, I got completed attracted by it. Either because of Hugh Fraser's appealing voice, or of Agatha Christie's amazing writing, or both? I don't know. It's just as fascinating as the solid paper is.

When Sheila Webb is sent out by the secretarial agency for which she works to the home of a blind lady, Miss Pebmarsh, to take some dictation, she is not expecting to find the corpse of a dead man in a room filled with clocks of different styles, but all pointing to the same time – 4:13. In a state of shock, she runs screaming from the house, straight into the arms of Colin Lamb, who is in the street on secret business of his own. Colin is involved in the spy business, and will get together with Inspector Hardcastle to try to discover the identity of the dead man and of his murderer. And along the way, Colin will seek the help of an old friend of his father, a certain M. Hercule Poirot...

This is one of Agatha Christie’s later books, written in 1963. Although nearly all of her books are well worth reading, there’s no doubt that by this period she was no longer producing novels of the same standard as in her own Golden Age, roughly the late ’20s to the end of the ’50s. In this one, which I hadn’t re-read for many years, I found I enjoyed the journey considerably more than the destination.

The set-up is great – the idea of the clocks is a suitably baffling clue, and the scene of the discovery of the body, where blind Miss Pebmarsh nearly steps on it by accident sending poor Sheila into a state of hysterical shock, is done with all Christie’s skill. There’s all the usual fun of interviews of the neighbours, and Christie creates a bunch of credible and varied characters, who each add to the enjoyment of the story. We also get to see life in the secretarial agency, a career that I assume has more or less died out now, certainly in the sense of girls being sent out on brief assignments to take dictation and so on.

It’s also a pleasure when Poirot becomes involved, though that doesn’t happen till almost halfway through the book. Poirot is elderly by now, so doesn’t take an active part in the investigation, instead relying on Colin bringing him information. It works quite well, and Colin is a likeable character, but my preference is for the books where Poirot is more directly involved. There’s a nice little section when Poirot lectures Colin on detective fiction, referencing a mix of real and fictional authors. I suspect Poirot’s views give an insight into what Christie herself though of the various styles.

Perhaps it was because I was listening rather than reading, but I didn’t find this one as fair-play as her earlier books – it seemed to me rather as if Poirot summoned up the solution based on instinct rather than evidence, leaving me rather unconvinced in the end. It feels as if Christie ran out of steam somewhat, and having thought up an intriguing premise, couldn’t quite find an ending that lived up to it. The ending left me feeling a bit let down but, as I say, I enjoyed the process of getting there.

What worked less well was the secondary story – Colin’s search for some kind of spy. Again some of this is down to preference – I’ve never been so keen on Christie’s occasional forays into spy stories as her straight mysteries. But I also again felt that Colin reached his solution out of the blue, and the tying together of the two plots contained too much coincidence for it all to feel wholly credible.

I listened to the audiobook narrated by Hugh Fraser, who does his usual excellent job of giving all the characters subtly different voices and suitable accents, without distracting from the story by overacting any of them – i.e., no falsetto women, etc.

Overall, then, not one of Christie’s best, but still well worth a read or re-read for fans. It wouldn’t be one I would suggest as a starter to her work, though – there are glimpses of the old magic, but it doesn’t show her off as the genius of plotting she undoubtedly was in her prime. 3½ stars for me, so rounded up.

There is not much Poirot in this Poirot, and the ending feels rushed and unsatisfactory. Saved by a wonderful narration from the fabulous Hugh Fraser.

One of her best

Our detective doesn't arrive until late in the story, nonetheless it is a brilliant story. I almost listened to it in one day.

Loved the narration. Not one of my favourite Agatha Christie books, but after hearing, I'm going to read it again!

Another great whodunnit with a wonderful plot.
Although a Poirot stiry he plays littke part in the story.
If you are a Christie fan you'll still enjoy unravelling this story

very disappointing a long winded description of uninteresting people. Lot of padding not much story

Hugh Fraser narrates excellently. Plot moves along nicely in typical Christie fashion.. Easy pleasant listening.
Then when it winds up at the end it becomes ridiculous. Loose ends and false trails all tied up in impossible ways. Try not to fixate on that last half a chapter.
Enjoyed first listening and I like Hughs voice chattering in the background while I'm working from home as I listen to repeats incessantly.