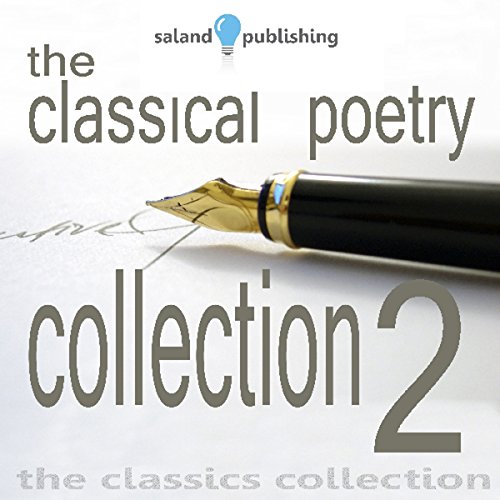 What listeners say about The Classical Poetry Collection 2

Decent Narration and Music but Sound Effects NO

Pachelbel's Canon in D remains one of my favorite pieces of music. When I heard this song in the background of a gravely spoken bit of poetry, I simply had to hear the rest of it. This is a collection of poetry narrated and set to mostly classical music. The quality of the audio of the narrations varied. Some sounded quite clear and good and with others, you could hear the slight echoing of the room. I found the narrators for the most part to be good choices, but I had problems with a couple. The unevenness of the quality of the audiobook and overall offering keeps my rating of this as just average, but it wasn't such a poor purchase for one who liked the music and was somewhat interested in poetry.

"Anthem for Doomed Youth" by Wilfred Owen was the first poem. I had never heard of Wilfred Owen before this. I actually didn't even know what the title was because I didn't quite understand the narrator. He had a pleasant voice though. I really liked the way he read it against the music of Pachelbel's Canon. I found the sound effects of canons going off rather distracting, however, and was rather amused at the contrast the violent sound made against the soothing background of the Canon. That was before I realized what the poem was about - and the background of the poet (yes, I wasn't quite listening to the words but rather the music and the narrator's voice; it was lovely :) ). Learning this now, it made better sense to me and actually made the poem seem more poignant. I still don't know what the narrator was saying. I suppose I ought to go pull up the print version to read along with.

The second poem was "Friend who sent me some roses" by John Keats. I had heard of John Keats. I cannot say I've read a poem by him. I confess, I have not been a poetry reader since I was a child and thought I loved poems (but mostly because the short poems were easier to read than the longer chapter books). Anyway, this narrator reads really well - and in fact, is one of the better narrators. She has a pleasant voice, and the quiet, relaxing classical music (which is familiar to me but I cannot recall the name at the moment) was not distracting. Most unfortunately, the narrator's "S's" stood out. I don't know how to describe it. They squeaked? Hissed? Or something. It hurt my ears, made me cringe and, in the later and longer poems, made me wince each time it occurred. I wasn't able to let myself go and enjoy music, poem and narrator - and the one narrated by this woman with another Pachelbel's Canon in D background music was really lovely, too.

The third poem was "The Ruined Maid" by Thomas Hardy. The narrator's voice was very expressive and flexible. The jaunty pipe music accompanying the poem set the tone quite well, and the narrator seemed to narrate with the beat. It was fun to listen to.

I won't go through the rest of the 16 or 17 or so poems but it included a few from Emily Bronte, William Wordsworth, Alfred Tennyson, and several where the title nor author was mentioned. For the most part, I enjoyed the music and found a few well matched to the poem, but found nearly all the sound effects distracting and unnecessary.