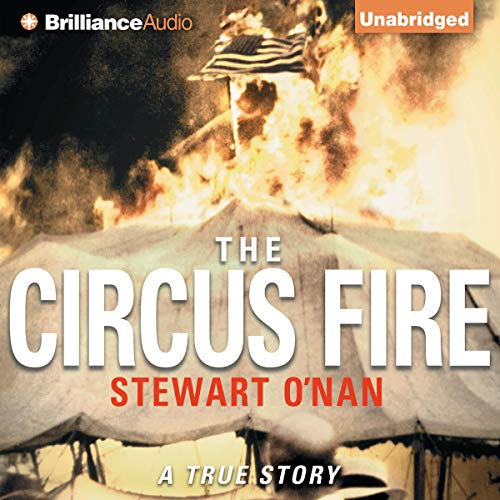 One of America's most acclaimed novelists turns to nonfiction in this powerful re-creation of the great Hartford circus fire, which took the lives of 167 people and forever changed the city and its people.

On July 6, 1944, in Hartford, Connecticut, the big top of Ringling Bros. Barnum & Bailey Circus caught fire during the middle of the afternoon performance. Nine thousand people were inside. The canvas of the big tent had been waterproofed with a mixture of paraffin and gasoline. In seconds, the big top was burning out of control. Bleacher seats were fronted by steel railings with narrow openings; the main exits were blocked by caged chutes in which leopards and lions were maddened by the fire.

In re-creating the horrific events of one of America's most cataclysmic civic tragedies, Stewart O'Nan has fashioned both an incomparably gripping narrative and a profound, measured glimpse into the extremes of human behavior under duress. In the madness of the inferno, some, like animal trainer May Kovar and the tragic Bill Curlee (who tossed dozens of children to safety over the lion's chute), would act with superhuman bravery. Others, like the sailor who broke a woman's jaw to get past her, would become beasts. The toll of the fire, and its circumstances, haunt Hartford to the present day - the identity of one young victim, known only as Little Miss 1565, remains an enduring mystery and a source of conflict in the city.

But it is the intense, detailed narrative - before, after, and especially during the panic under the burning tent - that will remain with listeners long after they finish this exceptional book.

"This moving elegy does tribute both to the terrible tragedy and to O'Nan's talent as a writer." ( Publishers Weekly)

What listeners say about The Circus Fire

As a non-American I knew nothing about the Circus Fire before listening to this book. I now consider myself better informed! :-) This is a masterful piece of investigation and storytelling. The tale spans 55 years and virtually no stone remained unturned by the author's clearly painstaking research. Special credit also to the narrator - he really helped to bring the era of the events alive to me. This is one of the very best Audible books I have listened to over the last three years. Be aware that it can be rather distressing in its attention to detail. The fire itself took just a few minutes but the description from many different perspectives alone took over two hours to read... Highly recommended!

Not for the faint of heart!

What made the experience of listening to The Circus Fire the most enjoyable?

I enjoy history and this was a piece of history that I knew nothing about. A circus fire that killed 167 people and changed Hartford, Conn. profoundly was very engrossing. The author, (who writes fiction) was very succinct in his facts and looked at every aspect of the fire.

What other book might you compare The Circus Fire to and why?

Calamity, the Heppner flood of 1903 by Joann Green Byrd. Both are disaster stories and both bring out the heroics of regular people when confronted with adversity. Both were very empowering stories.

What aspect of Dick Hill’s performance would you have changed?

He was adequate, I don't know what he could have done better. I just couldn't put him up there with Scott Brick, John Lee or Nadia May.

The greatest show on earth in flames!

While I liked this book, there were times that the numerous descriptions of the fire victims made me squirm and after a time became so repetitive that it was hard to listen to. Overall I learned a lot and came away with a greater understanding of what someone surviving a disaster of this magnitude deals with day to day.

However, as I said earlier this book was quite gruesome and not for everyone.

One of My Favorites

This is going to be one of my favorite audiobooks, along with Angelas Ashes and Assasination Vacation. The author wrote the book because he moved to Hartford and wanted to read about the fire, but found no book really chronicled it objectively. It isnt for the squeamish, the stories are detailed and the experiences of the victims, survivors, and rescuers are detailed, but I found it a facinating discussion of human behavior under disaster, and a good portrait of the times and the average people who lived in it. What I might be most impressed by, was the preparedness state of Hartford because of other fires, floods, and WW2, and how those plans were put into action in reaction to the circus fire. I doubt that now, even in an age of war and terrorism, that Americans would be prepared like this, and have plans and contingincy plans on all levels, including individual store owners who rushed to turn their delivery trucks into herses and ambulances at a moments notice. Not all the stories are victriolic, there are some selfish villians here, but it does show generally the self sacrificing bravery of Americans, as well as the sensationalism of the press and the bogging down of the judicial system in the aftermath. The narrator is fantastic, giving voices character but not silliness in his presentation. It is a great vocal interpretation of a facinating book.

Wow! A brillian way to convey this tragedy

There is no way something this tragic could be relayed in all its detail but the way the author maks this a story including back stories and history of similar events really captures a bigger picture. The details, the descriptions of mangled bodies, and the human reaction to such an event is far more than interesting or educational. The amount of research and quality of this book is amazing. If you read anything on human behavior, American or Circus history you need to hear or read this book. The narration is also well done and I can't give this author, narroter or anyon who came in contact with producing this book enough praise. So much goes unsaid, so much history of the circus era becomes forgotten, and this is one piece that really stands out.

This book has two faces: the first is a clear, comprehensive discussion of the infamous Circus Fire that struck Hartford in the 1940's; the second is a sensitive accounting of the victims, living and dead, who experienced such a terrifying few minutes, without being maudlin or sensationalist. I must say, I didn't expect the book to be so compelling -- I've just downloaded it to listen to it again.

Would have made a better movie

Definitely. If the author had stuck with one story line at a time instead of jumping around so much, it might have been less confusing. I found myself wishing it were a movie, so I could put a face with all the different names and visualize the layout of the circus. A lot of superfluous details could have been left out. I would have preferred an abridged version.

Sorry to say, I have not been able to finish the book. The beginning held my interest, but the longer it goes on, the less I care to know.

The only suggestion I can think of is to read with a little less emotion. The story is compelling enough in itself without trying to add any drama to narration.

Do you think The Circus Fire needs a follow-up book? Why or why not?

No. There is almost too much information in this one book.

My review may be tainted by the fact that, prior to "The Circus Fire", I had just listened to "To Sleep With the Angels." While the subject matter is very similar, the story of the school fire was presented in a more cohesive fashion and was a superior listening experience for me.

I thought this was going to be a novel but was pleasantly surprised by how exciting the story was, anyway. Be warned-- some parts are very graphic. A part of US history I never even knew had happened!

Beyond doubt, this is a powerful and detailed account of an American tradegy. It was an experience I will not soon forget. Narrator, Dick Hill brings O'Nan's painstakingly researched story to vibrant life. Hill plays every character to perfection in an absolutely stellar performance. If you listen to books, you must listen to this one. Nothing on the printed page could convey the raw emotion as does this audio version.

If you could sum up The Circus Fire in three words, what would they be?

It was thorough, and linear. A lot of books seem to jump around in the timeline for dramatic effect (which sometimes works and sometimes doesn't) but this one doesn't do that.

The story of Little Miss 1565 broke my heart. Afterwards I decided to do a search online and easily found her picture. Seeing it and knowing that was a real, dead little girl made everything hit home for me. After I was done with the book I just kept wondering how on Earth she hadn't been claimed. It's possible someone claimed the wrong body, but how? She was (one would think) the most identifiable of all the victims. Her story stuck with me.

Very descriptive history of long ago

I have listened to this twice now. Could not stop. Is a very sad, but needful lesson to be learned. Was told very well.