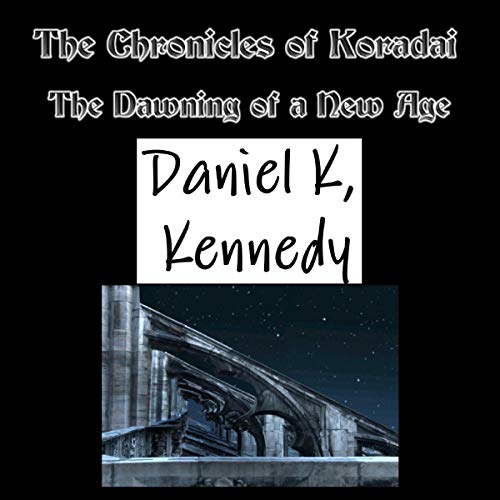 The Chronicles of Koradai: The Dawning of a New Age

The death of a King heralds a new era in the world of Koradai. It is written by the legendary visionary that after a King's death, the King's faithful servant must read from the ancient text in order to call upon the new ruler, however when Koradai's most treasured possession is stolen by a traitor of the palace it is up to the towns people to take action.

Will the visionary start to adapt to the dark evil that holds it or will good fight back and claim the land once more?

Julian Somers misses the last bus home after a night out with his best friend Steph. Deciding to take a short cut, Julian does not realise that he is about to be sucked into a world of which he knows nothing. The visionary is calling its new master and the messenger is just about to arrive. Join Julian Somers on his journey in The Chronicles of Koradai.

What listeners say about The Chronicles of Koradai: The Dawning of a New Age

This audiobook The Chronicles of Koradai - A Dawning of a New Age is first in a series of three books wrote for teenagers. The author is open and honest in the description when he declares that he is not at all a professional writer. But still enjoys writing short stories as a destraction for mental illness.

The book is quick paced, loving and light hearted with a LGBT element to it.

Although I enjoyed listening to it and how the story progresses I agree that these books would suit teenagers and looking for a short story.

The main chairicter Julian is summoned to another world by an ancient book. Julian has been chosen to go to the new land and rule as king as the previous has passed away. Julian struggles with his new life and what is expected of him aswell as a new first time same sex relationship with a guy from the new world (Koradai)

I will deffo be listening to the rest to see where the charicters end up.

Like I said if you are a teenager wanting to read a light hearted LGBT love story then this is for you. If you want something more proffesionally written and well thought out then this is not the series for you.

Stretched my credulity until it snapped

I didn't finish this book, which isn't all that common for me. It's not that it was BAD, per se, but it was just so unbelievable I could no longer suspend my disbelief. The plot is this: Julian is at a party with his friend Steph, who ditches him, and he ends up walking home alone. A man supernaturally appears out of nowhere, tells him he is the king of a kingdom (Land? World?) that Julian has never heard of, whisks him magically away to said kingdom where he has to fight for his crown against an evil wizard trying to seize control.

Here's the thing though: the unbelievable part? Nothing to do with Julian or the main plot. I can buy supernatural stuff, and who can say what is realistic and unrealistic when it comes to magic? No, the unbelievable part involves Julian's friend Steph (remember her?), who is searching for him on earth with the help of Jane, aka The Worst Police Officer In History. Seriously, I'm not sure Jane has ever gone through the academy. She shares all sorts of privileged information with Steph, allows her to take the lead when questioning witnesses, looks the other way when Steph acts like a complete monster to an innocent hospital worker just trying to do her job, and eventually romances her as well. The kicker for me was when Steph and Jane's investigation uncovered a surveillance video that the police had been unaware of. The lady who took the video happens to have the disc IN HER PURSE for some reason, and cheerfully turns it over to Jane, who then proceeds to LET STEPH TAKE IT HOME. What the heck?

It goes to show that this bothered me far more than the supernatural goings-on. I can suspend my disbelief when it comes to magic, but not when it comes to a police officer acting like someone who not only flunked out of the academy, but has never even HEARD of it. Give me a break.

I did have other complaints, but they were minor and weren't enough to get me to stop listening or even dislike the book. The plot moves forward at lightning speed, especially in the beginning. The parts with Julian and Christian (the man who whisks him away on said adventure and whom he eventually romances, I assume) were nice but they were short and the action kept cutting away to Steph, who isn't even that likable a character, even though I think the author thought she was. The narrator reads things WAY too quickly, and Christian is described as having an English accent but just, um, doesn't. I did like the narrator's voices for the other characters, especially the villains, and does one heck of an impression of a little girl at one point.

Also, a minor point, but why the name "Christian?" A name so obviously tied to Earth when Koradai is explicitly stated to not be on earth is a huge plot hole, in my opinion. Julian asks remarkably few questions about his predicament; I'm not sure what questions I would ask but if I met someone who claimed to be from another world, who didn't know what a car or a toilet were, and he told me his name was "Christian" I would ask him to tell me the meaning of his name. If Christianity exists in Koradai then Daniel Kennedy's world building gets an F from me.