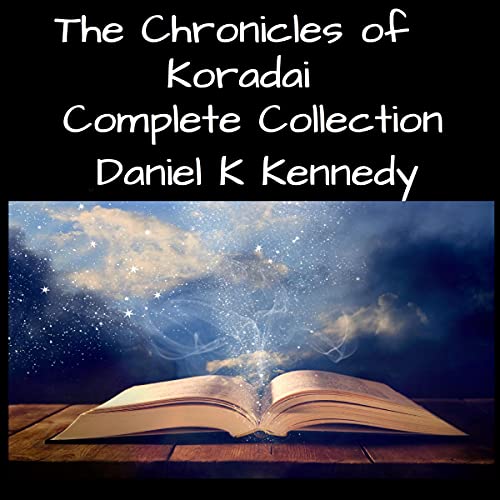 The Chronicles of Koradai - Complete Collection

The death of a King heralds a new era in the world of Koradai. It is written by the legendary visionary that after a King’s death, the King’s faithful servant must read from the ancient text in order to call upon the new ruler, however, when Koradai’s most treasured possession is stolen by a traitor of the palace it is up to the towns people to take action. Will the visionary start to adapt to the dark evil that holds it or will good fight back and claim the land once more? Julian Somers misses the last bus home after a night out with his best friend Steph. Deciding to take a short cut, Julian does not realise that he is about to be sucked into a world of which he knows nothing. The visionary is calling its new master and the messenger is just about to arrive. Join Julian Somers on his journey in The Chronicles of Koradai.

In the land of Koradai the adventure continues. King Julian and Christian embark on a journey to uncover the secrets of the Goddess Zandria. Kolombina, the oracle knows of the dangers they must face to ensure a safer future for the next generation of townsfolk. But all is not as it seems. Has the evil Hazzanim really gone for good? Back on earth King Julian's best friend Steph still has no idea what has happened to him but as time moves on his disappearance becomes easier to deal with. Although still desperate to find out what really happened to Julian, Steph is preoccupied with her new girlfriend, police officer, Jayne.

From the very first moment they met the attraction between Julian and Christian could not be denied. Things move along slowly for a while until they both realise their destiny is to be together.

Julian finally gets to visit Steph back on earth as they are led there by the traitor of the palace. Christian’s love continues to grow for the king as their wild adventures continues. Magic loses control and a new member of the royal family is revealed. All in the third instalment in the Koradai series.

What listeners say about The Chronicles of Koradai - Complete Collection