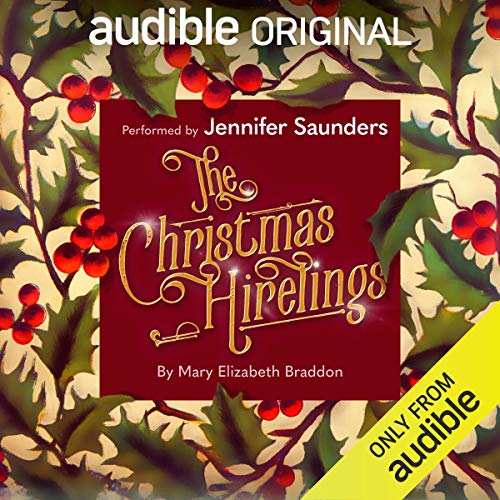 A heartwarming festive tale of redemption and cheer, The Christmas Hirelings is the story of a lonely widower who reluctantly invites a group of children to his manor for Christmas. It showcases the benefits of opening your doors and hearts during the holiday season.

About the Book
First published in 1893, The Christmas Hirelings is a delightful short tale of compassion and redemption. With his sole surviving daughter Sybil estranged, and his wife passed away, there is a deficit of Christmas cheer in the near-vacant country mansion of Sir John Penlyon. In an attempt to improve the festive mood, Sir John’s good friend Mr Danby suggests that three children be 'hired' over the Christmas period in the hope of brightening the mood. After overcoming his initial reluctance, Sir John soon opens the doors of Penlyon Castle to Lassie, Laddie and little Moppet. Their arrival does more than signal the coming of Christmas however, as Sir John finds himself re-evaluating his past actions.

About the Author
Mary Elizabeth Braddon was a popular English author who earned success in the Victorian era with her sensation novels. Born in London in 1835, she was raised by her mother Fanny after her parents’ separation. She began working as an actress as a teenager, but after eight years, and with declining popularity and waning interest, she instead turned to writing. Her prolific output resulted in over 80 novels, 150 short stories, as well as plays and articles. Braddon is best known for her novel Lady Audley’s Secret, which combined elements of the detective novel, the psychological thriller and the romantic comedy to become one of the most successful novels of the 19th century.

About the Narrator
Jennifer Saunders is a national comedy icon and a much loved TV star. She has a host of awards to her name including five BAFTA Awards, two International Emmy Awards and four British Comedy Awards, to name a few. She is most well known for her French and Saunders comedy duo, Absolutely Fabulous and her work with Comic Relief. Jennifer’s voice credits include Shrek 2, Minions, Stick Man, Sing and Moominvalley.

What listeners say about The Christmas Hirelings

A treasured Christmas story. It belongs along side the likes of Charles Dickens The Christmas Carol. It is eloquently read by Jennifer Saunders. Her voice and vocal expressions bring to life this charming story. I thoroughly enjoyed listening to her as my mind was imaging Victorian England. I found the story and the reading absolutely delightful.

Brilliant Christmas story. Couldn't put it down. Jennifer Saunders was spot on. So impressed with her many different voices. Simply delightful. Telling all my friends!

I was looking for a joyful Christmas story that wasn't too heavy, but also not just "fluff". This fit the bill. The story is engaging, though not unpredictable.

The Impossible Weight of Stature and Wealth

Sir John Penlyon had it all over Ebenezer Scrooge. He had married, had a family, KNEW what it was like to embrace little ones and hear their laughter and hold their tiny hands. But coming from a long line of Penlyon blood, certain things were JUST NOT DONE. And when his younger daughter ran off and married outside their class, well, that was it. Banished! Years passed. Sir John's oldest daughter and her husband died. He, himself became widowed for a second time, never gaining the son he had dreamed of. And here it was, Christmas quickly approaching again, in a big and grand house, with only himself, his niece and his good friend, Danby who had come to visit. Sir John, bored and alone, agreed to allow Danby to bring in some hirelings . . . children of good character to help his niece better enjoy the holidays, so long as they do not misbehave or bother his routine. He will pay the family who lends them out at Christmas, and Danby and his niece will decorate the grand home for the holidays. What the old fellow did not count on was little Moppet, worming her way deep into his heart . . . the wide eyed wonder of a child, with wisdom beyond her years, she sticks close beside Sir John's side, even when he writes his letters, making a tiny nest for herself in his study . . . until she falls gravely ill . . . This sets in motion a fear and sadness that has the entire house on edge, as two doctors attempt to save the little girl's life . . . and the listener is on the edge of the seat, wondering if the old and crusty Sir John's icy heart will finally melt before it is too late . . .

Loved it! What a wonderful Christmas tale.

Thank you Audible for this Christmas gift I really enjoyed it. Jen Saunders is one of the best narrators ever, so even better for that too. The subtle nuances and humour makes this a great listen and was delightful.

A delightful Christmas story about an old man who, found wanting of Christmas spirit, takes up a friend's suggestion to hire some children for the Christmas holidays to inject some life and laughter into his quiet, lonesome world. What follows is a truly wonderful, albeit a little predictable, tale of the true meaning of Christmas. This was a free download on Audible and you would be a fool to miss out. It was an absolute pleasure to listen to this.

It was a sweet story, if a little predictable. What made it wonderful was the telling.

There are no surpises here but this is a lovely Christmas tale to warm the heart and embue one with a jolly feeling.

This was an incredibly charming heartwarming story. Easy to listen to and over too quickly (in a good way). Jennifer Saunders was a perfect reader.

It was a fine classic piece although predictable. Voice narration was excellent and overall I enjoyed it.

A pleasant short story. It wasn’t gripping or exciting. More a short portrait of life in the time.