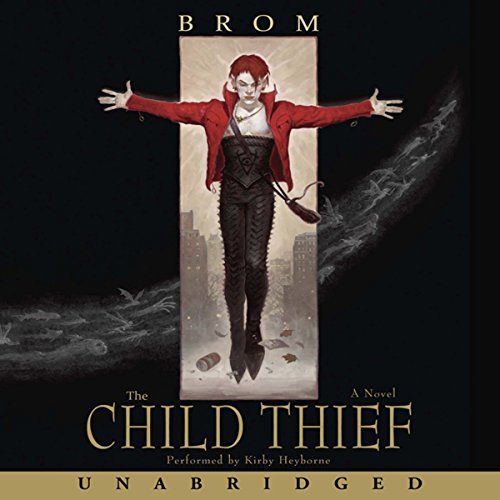 By: Brom
Narrated by: Kirby Heyborne

In the vein of Gregory Maguire’s bestselling works, the award-winning artist Brom takes us on a haunting look at the true world of Peter Pan, in his first full-length novel. From modern day New York to the dying land of Faerie, The Child Thief reveals the world of Peter Pan through the eyes of an insecure runaway who is seduced by Peter’s charm. But any dreams of a fairy wonderland are quickly replaced by the reality of life and death survival as Peter’s recruits are forced into a lethal battle in which the line between good and evil is blurred.

What an exceptionally excellent story

This is the Peter Pan that that should have been made into movie. Excellently written and what a exceptional performance by the narrator. I bought all of Brom's other books, and I mean all of them, audio and hardback off the back of this, I start Krampus tomorrow.

Was a great first book, a really good twisted dark side to a Peter pan type of story. Really enjoyed it.

The Child Thief was interesting and cleverly written. I enjoyed the new and interesting take on a very classic story. The story is told from many perspectives, so you know how each of the main characters feel, which makes them easy to relate to. It was a fairly violent book, but it only seemed to make the book seem more authentic. The danger seemed somewhat more real when described in such detail. I couldn't listen to this book all at one. It was dark and I often had to listen to some happy music because the story bummed me out so much.I wasn't sure I'd really like the book very much, and skipped over it several times. Then I read Krampus, also by Brom, and after reading that I was hooked on his style.

All in all it was a fantastic book, that I would be happy to forget- ONLY so that I could read it again as if it were the first time.

23 of 24 people found this review helpful

A gory retelling of Peter Pan

I thought this book was very well written and it kept my attention, the narration was excellent. The reason I didn't give it 5 stars is because it really is very violent and gory. In some cases it really seemed gratuitous and did not advance the plot. So, if you are squeamish you will want to avoid this one.

9 of 10 people found this review helpful

a beautiful entry but far from his best

most of Broms books seem to follow the same plot structure but that in no way means they are dull and boring. the child thief, krampus, and old gods do a great job of mixing together myths and legends into a new story while giving you points of reference. it gives you a way to get inside and fully understand the world that these myths embody. I'm not a smart man and ive got no gift for words but I'm trying....a little.
The child thief amd krampus were great books all around but old God's was by far my fav. try them out and I'm sure you will see what I was trying to vocalize.... especially about the plots

I read the reviews

I read some of the reviews on this book before I bought it, and almost didn't. Fortunately I listened to two other stories by Brom and was hooked on his style. This is not a child's story. It is about children, specifically about Peter Pan, but it is a story for adults or young adults and older teens, who have grown up fascinated by Peter Pan and are looking to hear the real story, or one more plausible then the Disney versions. The story was good, fast paced and full of suspense and vivid descriptions. Peter is a darker version of Pan than we are familiar with, but , for those of us who are familiar with and wondered at some of the things he did and said in the original, it is a more honest portrayal of the sprite that never ages,who is self centered and self focused and has no memory for people he has known. I enjoyed this story and the narrator who read the book. I look for ward to hearing more form Brom. He has shown himself to be a thoughtful, genuine creative writer, who knows how to build suspense and weave a tale of wonder. As Hook might say, "Good Form, Brom, Good form."

I didn't know going in just how good this book would be. From chapter one though, I was sucked into this world of magic. I'm normally a thrill reader, love Stephen King, so this isn't my usual cup of tea, but wow. Great spin on Peter Pan. Glad I took a chance.

The darkest Pan ever!

You'll find yourself cringing more than once while listening to this. Fits well in both the fantasy and horror genres. I really liked the afterward by Brom as well, it gave insight into what inspired such a twisted take on Peter and the Lost Boys. The Disneysation of Peter Pan is over! Long live the Child Thief!

8 of 10 people found this review helpful

couldn't stop listening!! This truly a great story with a hell of a twist and turns at every chapter

Not the children's story I remember, but better!!!

Great novel! Full of action and adventure, but not for children. Think it could go down in price and credits. If you decide to take a listen I don't think you would be disappointed.

3 of 4 people found this review helpful

I drink this book at least once a year, and while the audio format is perfect I strongly recommend reading the physical book, it is laced with exquisite illustrations.

2 of 3 people found this review helpful

A dark and terrifying version of Peter Pan

This was my favourite book of the year. I was gripped from start to finish. I couldn't stop listening to it, finding myself staying in my car after parking it because I didn't want to stop listening.

Brom proves in this book that he isn't just a brilliant artist but also a fantastic writer. The story is daring, free-thinking and sound. The narration is superb. Everything about this book is fantastic. The characters are alive and believable, but most of all, complex. No one is pure good, no one is pure evil. Welcome to a hundred shades of gray!

A warning: this book is ADULT ONLY. It isn't sexual, but the violence is disturbing.

One of the best fantasy novels I've ever read. I'm not sure how I can do the story justice in my reviewing of it.
I really felt like I was there in this world. Before I give my opinion of the plot, which I'll try to do without dropping spoilers, I should say that Brom writes exceptionally well. His way with words, it's not just the compelling plot he created, but I like his writing style (at least as I have heard it read).

The plot itself was really fun, and sometimes hard to read. This isn't a story for children. There are some seriously disturbing moments throughout the story.

I have been a fan of Peter Pan for as long as I can remember. I am also interested in the author, JM. Barrie's personal journey, from the death of his brother, the neglect of his mother, and his friendship with the Davies Brothers, who helped inspire him to create Peter Pan. So I am familiar with the darker origins of the character Peter Pan, and this story is closer to that Peter, than the modern Disney version.

Although this novel takes some of the source material, and adds in some ancient British fairy tales too, so it's different enough from the Peter Pan story most people know. It felt to me like Peter Pan meets Wizard Of Oz and Oliver Twist.
I also didn't see the ending coming, which I always like in a good story, when I can't predict how it's going to go.

The narrator also provided a great reading. Twenty hours and no complaints. I think he's American, but some of the non-American accents he pulled off very well. His skills for reading in different tones (for women, and different men), less well, but still good enough.

I only had one mild negative reaction, and that was some of the characters (and I felt like they were the words of the author) commenting on the other main character, Nick, and his decision to leave home. That he was wrong to leave. And while I won't mention the details (spoilers), I thought he was right to do so. He's a child. He's owed a safe place to live, and a parent's job is to provide that. And if the child can't get that, then I don't blame them one bit for leaving to find safety elsewhere. That's all I can say about that without spoiling anything.

So if you're in the mood for a lengthy dark fantasy, with a big splash of Peter Pan and some other ancient myths blended into one great story, I highly recommend this.