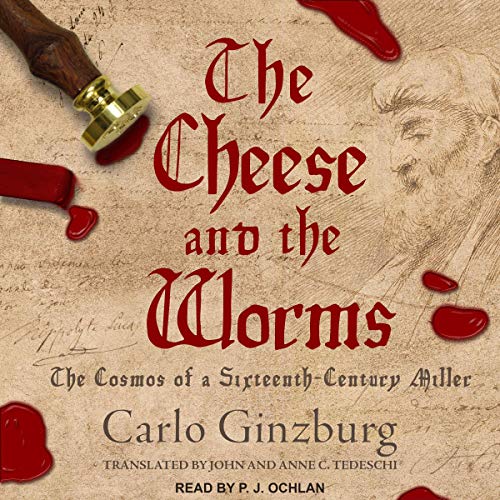 The Cheese and the Worms

The Cheese and the Worms is an incisive study of popular culture in the 16th century as seen through the eyes of one man, the miller known as Menocchio, who was accused of heresy during the Inquisition and sentenced to death. Carlo Ginzburg uses the trial records to illustrate the religious and social conflicts of the society in which Menocchio lived.

For a common miller, Menocchio was surprisingly literate. In his trial testimony, he made references to more than a dozen books, including the Bible, Boccaccio's Decameron, Mandeville's Travels, and a "mysterious" book that may have been the Koran. And what he read he recast in terms familiar to him, as in his own version of the creation: "All was chaos, that is earth, air, water, and fire were mixed together; and of that bulk a mass formed - just as cheese is made out of milk - and worms appeared in it, and these were the angels."

In a thoughtful new preface, Ginzburg offers his own corollary to Menocchio's story as he considers the discrepancy between the intentions of the writer and what gets written. The Italian miller's story and Ginzburg's work continue to resonate with modern listeners because they focus on how oral and written culture are inextricably linked.

What listeners say about The Cheese and the Worms

I was completely captivated. Its like one part historical analysis and one part detective story. Highly recommend for anyone interested in social history or medieval times.

Mennochio is great, very interesting glimpse into the past world. Ginsburg does a great job.

The story of a sixteenth century miller accused of being a heretic by the Inquisition, based on documentation produced at the time. The story itself is really interesting, as are the philosophies of the miller and the circumstances in which he found himself. However, the academic content and contextualisation which are central to the book make it very heavy to listen to. P.J Ochlan does his best with very dense material, and I got the general jist of the arguments Ginzburg was making, but it was difficult to fully concentrate on the detail and take in all the points that were being made. The language is not conducive to an audiobook, and I would recommend reading the text in print instead for a full appreciation of it.