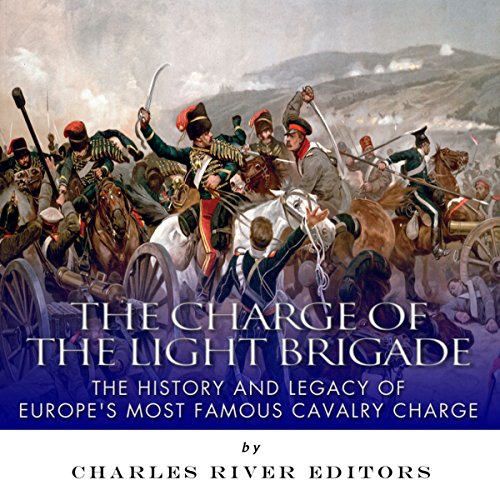 The Charge of the Light Brigade

The History and Legacy of Europe's Most Famous Cavalry Charge
By: Charles River Editors
Narrated by: John Skinner
Length: 1 hr and 37 mins
Categories: History, Military
5 out of 5 stars 5.0 (1 rating)

The Charge of the Light Brigade

The Charge of the Light Brigade is the most famous British cavalry charge in history, possibly also eclipsing the renown of any other mounted attack conducted by the armed forces of other nations in the general imagination. This cavalry action is certainly remembered far more vividly than the 1854 Battle of Balaclava during which it occurred, and even the wider Crimean War that led to the battle.

Of course, the prominence of the Charge in popular and historical memory is due primarily to Alfred, Lord Tennyson's poem describing the events of that distant late October afternoon. The bearded Poet Laureate crafted a powerful, gripping poetic narrative that fixed the encounter firmly in both the popular imagination and in the English literary oeuvre. Millions of people who know nothing else of the Crimean War between Great Britain and the Russian Empire are familiar with Tennyson's memorable verses.

At the same time, however, his words also created a narrative about the combat which has obscured much contrary evidence, replacing fact with legend and completely obscuring the true significance of the Charge of the Light Brigade. Indeed, its perception by historians and depiction in history books has been massively influenced by the sheer artistic power of Tennyson's poem. Sober historians have unwitting cherry-picked the existing original documents to support Tennyson's "version" of the events while disregarding much contrary evidence that provides a very different perspective of the Light Brigade's attack.

What listeners say about The Charge of the Light Brigade

I enjoyed this modern retelling of the story

I enjoyed this modern retelling of the story. The linkages to modern historical facts was useful.