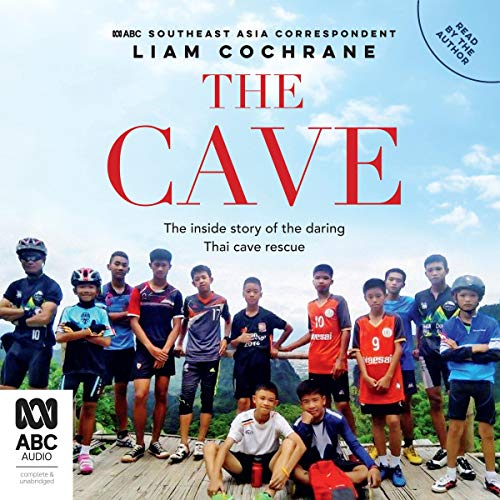 The inside story of the secret plans and unsung heroes that helped a team of international experts pull off the dramatic Thai cave rescue.

Twelve boys and one coach; four kilometres of tunnels; one huge rescue effort.

When a team of soccer players from the Wild Boars Academy Football Club - a scrappy club of undocumented migrants and outcasts - became stranded behind rising water in a labyrinthine Thai cave system, they set in train a drama that would captivate the world.

Nine days later, still trapped in the dark without food, and with only water leaking through the walls to drink, their survival seemed unlikely. Yet against the odds a team of determined divers traversed floodwaters and narrow cave-ways to locate the boys - alive and hopeful. And so began one of the most daring rescues the world has seen.

ABC foreign correspondent Liam Cochrane was on the ground as the dramatic events unfolded. Using his local knowledge and firsthand connections, he puts us at the centre of the story, as we witness the boys' agonising wait, the divers' battle against muddy currents, the race to pump out flooded caves and the work of the often quirky international experts who flew in to help.

He also reveals unreported or little-known information about the families, the background politics, the near misses and tragedies, the burnout, the triumph and what the future holds for a bunch of children and their coach whose fun excursion after soccer practice turned suddenly deadly.

What listeners say about The Cave

The Cave is an fantastic description of the most incredible rescue that captured the hearts and minds of the world. Liam Cochrane has beautifully captured this incredible story and been able to draw upon all the various elements and key people that were involved. He was able to use his years of experience as a foreign correspondent to reveal the cultural interpretations of what this was like for the Thai people. I loved hearing this audio book and was hooked. Even though I knew the cave rescue was a wonderful success I still went through all the various emotions in listening to this story. It was so great to have the author reading his own story.

I’ve met Dr Richard Harris a few times and I listened to this book in the lead up to listing to him talk about the rescue. Even knowing the outcome, this is a fantastic account from someone on the scene.
Liam Cochrane has done a wonderful job here. He is to be commended.

in depth on the thai cave rescue

liam cochrane, abc correspondent, reveals the behind the scenes story and goes in depth into the details of the rescue. its a captivating story and the book does well to capture that. theres not much from the perspective of the boys, and for good reason, but its interesting all the same.