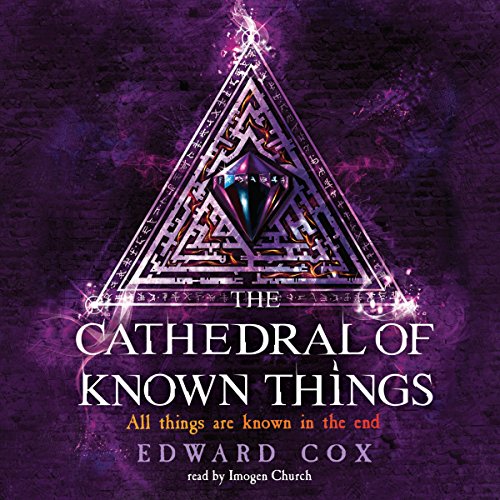 The Cathedral of Known Things

The Cathedral of Known Things

In the end, all things are known. Return to the world of The Relic Guard with this remarkable fantasy novel.

Divided, hunted and short on resources, the surviving members of the Relic Guild are in real trouble. Their old enemy, the Genii, and their resurrected master have infiltrated Labrys Town and taken over the police force.

So the Relic Guild must flee their home and set off on a dangerous journey across the worlds of the Aelfir. One that will lead them to a weapon which might destroy the Genii. Or the whole universe....

And 40 years before all this, the war which led to the fall of the Genii continues. And what happens to the Relic Guild during that conflict will change the course of their desperate flight.

This audiobook features an interview with Edward Cox and Imogen Church.

This is the second book in the Relic Guild series. I absolutely LOVED it!

The story is again narrated by Imogen Church, who also narrated Bridget Jones's Diary. She did a fantastic job in bringing the characters to life. Her ability to voice the different accents used for the various characters impressed me. I loved her speaking voice, and her reading pace was perfect.

Clara is a young woman of eighteen, who has been working as a prostitute in a brothel since the age of fourteen in the Labyrinth city called Labrys Town. I really liked her. She is stubborn and determined. She has magic in her veins and is known as a magica; she's a wolf shifter.

The story continues from the end of the first book. Now working with the remaining members of the Relic Guild, Clara finds herself, together with Van Bam and Old Man Sam, on the run from Fabian Moor and the Genii in an attempt to contact the Thaumaturgists. Meanwhile, Hamir, the Necromancer is pursuing his own line of investigation. There are also new characters introduced, such as Sergeant Ennis, a policeman of Labrys Town, who has been tasked to investigate and locate the members of the Relic Guild. Then there is Namjee (sorry, not sure of the spelling since I can only go by phonetics due to this being an audiobook), who is an intriguing character. She is an Aelfir that Van Bam had met before the end of the Genii war. Then there is Hillam and Gloguilder, who are also Aelfir. These two characters are extremely likable, their banter made me grin. They are best friends and sound like siblings at times. We also get to spend time with the Genii: Fabian Moor, Hargie Tabbet, Victor Gadrill and Mo Asherzad. This gives the reader a deeper understanding of their motivations and actions. Are they as evil as painted? Only time will tell.

This is a unique story; the world building and character development is extraordinary. I loved the descriptions of the scenes and characters. The story has a post apocalyptic feel to it, with a hint of steampunk, which is further enhanced by the split timelines, which are forty years apart. The characters in both the past and the present are quite interesting. This split timeline shows the reader the events in the past that led to the isolation of Labrys Town from the houses of the Aelfir, and also reveals secrets hidden by a few of the characters. This story has several twists and turns that kept me hooked. There is not a lot of action (as in explosions and weapon fire, although there is some in a few scenes) but, it's the storytelling that instantly pulls you in. I found myself on a roller coaster ride of emotion from beginning to end. There is a huge twist near the end of the story that had me in tears. I will not say whether they were happy or sad, because that would be a spoiler. However, the story does end in another little cliffhanger that made me gasp. I have a love/hate relationship with cliffhangers because they frustrate me to the point of screaming, but I am looking forward to continuing this story as soon as I can.
At the end of the audiobook, there is a 15 minute interview with Edward Cox and Imogen Church, which I found very interesting.

Edward Cox has written an interesting sequel to his debut novel. I loved his fast paced writing style. The flow of the story seemed a little more seamless than the first book, and this increased my enjoyment. I will be keeping an eye out for more of this author's work in the future.

perfect 2nd book and more excellent narrating by Imogen church. book 3 is already downloaded and ready for my evening walk with my Springer. can't wait to find out how it all ends.

Would you listen to The Cathedral of Known Things again? Why?

Which character – as performed by Imogen Church – was your favourite?

fantastic fantasy for children aged 15 to 50.

Sequel to The Relic Guild, a fantastic fantasy for children aged 15 to 50
that immerses you into The Labyrinth.
The much anticipated 3rd story has been written and awaiting publication and I for one can't wait.
Imogen's charactisations (is that a real word?) and style of reading add to an already stunning story.

Great book brought to life by Imogen's voice and characterizations. Thoroughly recommended for those that like a twisty dark storyline