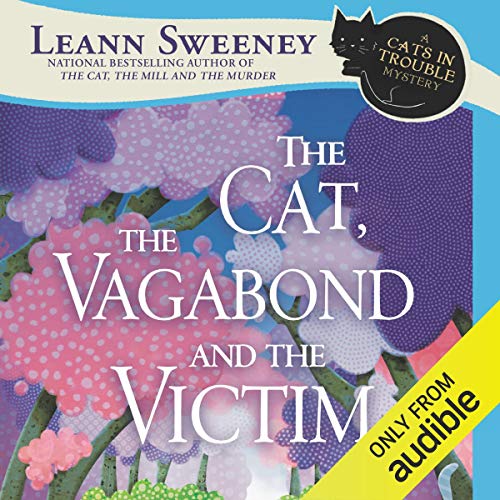 The Cat, the Vagabond and the Victim

The Cat, the Vagabond and the Victim

When Clyde the cat travels 200 miles back home only to find his former owner dead, the story makes national news. While everyone seems eager to tell Clyde's incredible tale, someone needs to step up to care for him. Because the media attention is creating chaos at the local shelter, cat quilter Jillian Hart agrees to foster the loyal orange tabby, hoping his location is kept secret. But while the media circus around Clyde continues, Jillian learns the real story behind his owner's death - he was murdered. Why would an elderly man already dying from a serious illness become a murder victim?

As the local police search for an answer, Clyde makes another escape. Jillian is drawn into the case when she finds Clyde has returned to his home again - and he's found another body. When the motive behind these murders is finally revealed, Jillian understands Clyde is in danger of becoming the next victim, and she must help find the killer before the claws really come out....

What a great Series for Cat Lovers & Mystery Hounds

I have enjoyed this series from book 1. This book does not disappoint.
Several murders to solve, break in's, the press, and a dis functional family. This all keeps this book moving at a can't put down pace.

Vagabond Clyde is a cat, who returns home to a murdered owner. Fostered by Jillian Hart, Clyde helps unravel the mystery that is sure to follow. I continue to love the rambling, cozy mystery. Cats, quilts and familiar small town characters… I can’t help but love them all! The Cat, the Vagabond and the Victim is another very appealing mystery by Leann Sweeney. The Audible version is a great listen for a cozy afternoon.

This is another good book in a good series. It is light and cozy with a good storyline and well developed characters.

Not a bad cozy mystery, but moves slowly

This is a good cozy mystery for listening to something fun in the background while you're doing something else. It's cute, it doesn't require a lot of concentration, and it doesn't move quickly. That said, I have really enjoyed Leann Sweeney's cozy mysteries, and this was no exception.

For those who enjoy cat-centered mysteries, this involves a lot of cats, but be aware that they don't necessarily take center stage. The cat doesn't voice the mystery, but there are several felines involved throughout the book.

I listened to it on and off over the course of about a couple of weeks around bedtime to wind down. It was perfect for that, and I particularly enjoyed Vanessa Johansson's narration. Her voice is soothing and has enough cadence to it to keep the listener interested, but it's never jarring.

For those who enjoy nonstop action, look elsewhere. This is not a military thriller and something doesn't happen every second, so if you're looking for heart-pounding excitement, this is not the book for you.

the most boring shes ever written

The narrator didn't sound right. The
story was slow and boring. Could not finnish it. I've enjoyed all until this one. What Happened???

AS I HAVE SAID IN REVIEWS OF EARLIER BOOKS, I LOVE THIS SERIES. IT HAS HEART, LOVABLE CHARACTERS (AND A FEW ANNOYING ONES - HA), GOOD DIALOGUE, AND IT IS NEVER BORING. LAST, BUT CERTAINLY NOT LEAST, VANESSA IS A VERY ENJOYABLE NARRATOR. I DO HOPE LEANN SWEENEY IS WILLING AND ABLE TO CONTINUE THIS SERIES.

A devoted cat who helps his murdered master

Jillian takes over as shelter mom of a large, overweight cat in The Cat, the Vagabond, and the Victim by Leann Sweeney. Clyde's human has become seriously ill with cancer, so he has had to send Clyde to stay with a friend. In short time, Clyde disappears, only to reappear two months later in Mercy, NC, 200 miles from where Clyde left, but unfortunately just too late to find Mr. Jeffery, his human, alive. But leave it to Candace, Jillian's best friend and fan of all things forensics, to notice something suspicious about Mr. Jeffery's death. He does not have as many of his heart pills as he should. Could he have been murdered? Committed suicide? But if so, why did he not take all the pills in the bottle?

These questions take a back burner to Jillian when Clyde manages to slip out the door and escape. In panic over the loss of her newly-rescued cat, Jillian grabs Candace and looks all over for the boy. Returning to Mr. Jeffery's house on the assumption that Clyde escaped Jillian's house in order to finish his journey to get to his human, Jillian and Candace return to Mr. Jeffery's home, where they find a new surprise: the dead body of Buford Miller, Mr. Jeffery's home health aid. With rumors swarming about drugs, a missing will, and a large family with individual interests, Candace gets busy and tries to send Jillian home to rest and stay out of police business.

As usual, this sixth book in the Cats in Trouble series does not fail to delight. I appreciate the depth of the plot and the way Jillian gets involved in her mystery cases. Most cozy mysteries feature an intrepid amateur out to prove the world wrong and herself (for these books usually feature a woman) correct against all odds. Such women are hard for most readers to identify with, as they do not act the way a typical individual behaves. But in this case, Jillian gets involved in her mysteries because of the nature of her humanity and In particular because of her intense love of cats. In this case, Jillian's sympathy leads to her being willing to become a shelter mom for Clyde, which soon brings her into the case. All her subsequent actions then stem from her desire to aid Clyde and improve his life.

The cats in the book each have their own personality and characteristics that make it obvious that Sweeney has her own personal experiences with cats. Jillian's trio are rescue cats from the devastation caused by Hurricane Katrina. Having read this book as people are cleaning up after Hurricanes Harvey and Irma, I found this detail all the more poignant. All the books in the series talk about the fact that the three cats were rescued from Katrina, but The Cat, the Vagabond, and the Victim plays up the rescue angle all the more.

Syrrah, the Abyssinian, is bolder than Jillian's other cats and exhibits a high degree of curiosity, creating a fun scene when he pounces on the obnoxious Lydia's sparkly toe ring. Merlot, the Maine coon cat, which is a breed that grows to 20 pounds, seems a bit shy and serves as Jillian's &quot;gentle monster.&quot; Then Chambliss likes to stick close to Jillian and is the sweet one looking out for Jillian.

I also appreciated the discussion of the ethics of journalism, with Emily, a weather reporter, eager to rise up the ranks of journalism by any means necessary, going so far as to put a GPS tracker on Jillian's car. With Kara, Jillian's step-daughter, being the owner, editor, and reporter of the local newspaper in Mercy, she gives Emily a serious talk about the proper methods of doing reporting. Then later, Kara points out that as much as she would love to report a discussion she had with Jillian and Kara's boyfriend, an assistant district attorney, that concluded several details of the case, she must report only the facts and can't publish speculation, as much as many other news agencies do that. In an age when guesses get promoted as tall news, I wish more news agencies followed such guidelines.

In addition, I thought the book dealt sensitively with issues of race and interracial marriage. That is a topic often not dealt with in cozy mysteries, which stick to completely uncontroversial issues. The book shows an example of an African American woman who refused to marry a white man years earlier because she felt it would hurt the man she loved. However, it also shows how sadly he lived because of this. I appreciate the way it shows the converse of an interracial marriage.

Vanessa Johansson performs the audio edition of this book. She seems to be the very part of Jillian, who narrates the book. Johansson sounds like she is smiling through much of her reading. She really takes on the character of Jillian with zest for the role and realism in its performance.

I have loved all of Leann Sweeney's books, and The Cat, the Vagabond, and the Vandal is no exception. I enjoyed the depth and complexity found in the mystery and not just a simple whodunnit. I did need the summation of the events at the end as it got confusing at times towards the denouement. However, this book stands out so much further than most books in its genre that ever that bit of confusion cannot lower the book in my estimation. I give the book five stars and loon forward to the next book in the series!

Family ties can be killer

Very Good, But Not Quite Up To Series Par

I'm definitely hooked on the "Cats In Trouble" series. This book was a fine example of the series in every way, but if I had to rank them, this one would probably be ranked last. Not because it's bad, but because the story doesn't quite measure up. The ending in particular wasn't quite satisfying, and I didn't quite buy.

Other than that though, it's a fun romp with all the usual characters doing their usual thing.

Not the best for Leann Sweeney

This story was lack luster. I found it boring and hard tio get through. I almost returned it.

I have enjoyed these Cats in Trouble stories from the beginning and this one is a great addition to the series. The story is captivating with just enough twists in the story line to make the murder mystery interesting. The excellent narration captures the flavour of the South. As a quilter myself and the owner of a Main Coon I find the combination irresistible.