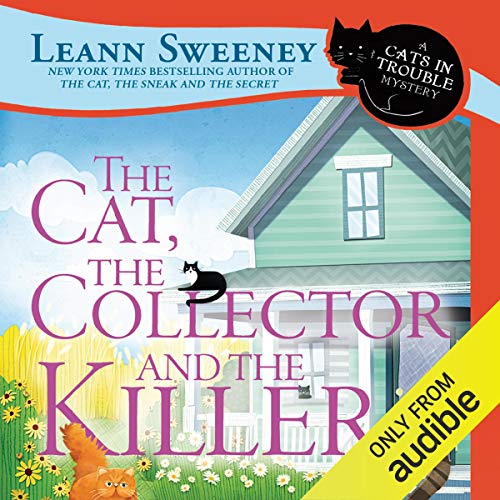 The Cat, the Collector and the Killer

In the latest mystery from the New York Times best-selling author of The Cat, the Sneak and the Secret, a cat collector is suspected of murder.

Jillian Hart and police chief Tom Stewart are enjoying peaceful, newly wedded bliss in Mercy, South Carolina, until a woman is found wandering the streets one night. She's in her nightclothes, disoriented, and carrying a kitten in a tote bag. A search of the woman's house reveals many more cats, a maze of cardboard boxes - and a dead man.

Although the evidence suggests the frail woman is the killer, Jillian doesn't believe she's capable of such a crime. The dead man had many enemies in town, which means finding the real murderer may prove to be its own cat and mouse game....

What listeners say about The Cat, the Collector and the Killer

This book shows what a consummate storyteller Leann Sweeney is? The best so far, and please Leann, give us more.

I LOVED THE BOOK, CHARACTERS, AND NARRATION. I SO HOPE TO SEE MORE IN THIS SERIES AND FOLLOW NOT ONLY THE DEVELOPMENTS FOR TOM AND JILLIAN, BUT ALSO KARA AND LIAM AND MAYBE GRACE SND FINN, NOT TO MENTION CANDACE AND WHO KNOWS. READ AND ENJOY. (ALTHOUGH I RECENTLY POSTED ON LEANN SWEENEY'S FB PAGE AND MAY HAVE FRIENDED HER, I DID SO ONLY TO FOLLOW HER BOOKS. I DO NOT KNOW HER NOR DO I HAVE ANY RELATIONSHIP OTHER THAN LOYAL READER.)

I loved the book ! Fabulous narrator and super awesome author! A great book for cat lovers!

LOVED all 8 books in the Cat In Trouble Series.

This series is one of the best I've ever read. I love how it is told by a woman that has the smarts and extended family to help along a murder mystery.

Best in the series so far.

Best book in "The Cats in Trouble" series so far. Can't wait for book nine and many more to come.

A great pleasure of a read

Jillian has now been married to Tom, the acting police chief, for six months in The Cat, the Collector, and the Killer by Leann Sweeney. She gets a call from Sean, who runs the local cat shelter, asking for help. The neighbors of a woman who collects cats, named Minnie, has seemed to have disappeared, and her cats, which have always been house cats, are roaming around the neighborhood. But Sean can’t go by himself because this is technically an issue for animal control, and Chester, the rather incompetent animal control officer, has a restraining order against Sean. But when they get to Minnie’s house, they find more than her seven cats, more like two dozen cats, and all are outside, begging to come in. Then, as Sean goes into the house, he is alarmed to find a body, that of Chester. With the arrival of Tom and other police, they notice lots of boxes filled with electronic goods filling up the house, something that doesn’t make sense to anyone. Then Tom gets a call that Minnie has been found walking down the street in her nightgown, clutching a kitten and acting mentally disturbed. The people at the hospital where Minnie has been taken are having trouble with Minnie and ask Jillian for help. Minnie won’t let go of her cat. So Jillian gets involved in the case from Minnie’s side.

With Minnie clearly not coherent, the hospital calls in a psychiatrist, Dr. Brenda, who figures out that Minnie’s erratic behavior is the result of a brain tumor. Her poor mental condition seems to have led to Chester’s taking advantage of Minnie by dropping off numerous cats with her and leaving the many boxes with Minnie. Then, as Brenda goes out to buy a journal in the hopes that Minnie will respond to it, someone rams her off the road, almost killing her. Jillian stays involved in the case and tries to help all those involved, no matter how they connect to the case.

This book continues with all the strength of previous books in this series. I loved the intricate details of the book and how things worked together like a complicated puzzle that gradually come to fit. I appreciated getting to spend lots of time with Tom, Kara, Candace, and other returning friends and also with new friends we meet in this book. And just as Jillian gets involved in her cases because of her love of cats, as well as people, the cats help Jillian out several times.

Vanessa Johansson continues as a terrific narrator, using the first-person role of Jillian. She has such a caring voice that she really makes me think of her as Jillian. I really appreciate her performances.

I loved The Cat, the Collector, and the Killer as much as I love all the other Cats in Trouble books. They have so much depth to them that listening to any of these books is a real pleasure. I give this book five stars.

Not My Favorite In The Series, But Good Nonetheles

I really love this series, and look forward to each new release. This one is pretty representative of the series, but probably ranked in the lower half of the books for me. The plot wasn't quite as engaging as some, nor were the (new) characters. But overall it was still a pleasant read and I did certainly enjoy it.

I love This Series

I really enjoy this series. The characters are all very sweet and wholesome. The plot is always good. I look forward to the next book.

Cats and a mystery

Jillian Hart has been married to Tom Stewart, acting Chief of Police in Mercy, SC, for six months, and they and their four cats are very happy. She's stopped going to craft show and instead sells her cat quilts online--with increased sales. Her cats are extremely happy about that change!

So when old friend Shawn, the head of the local animal rescue, needs someone to go with him to the home of an older woman whom the neighbors have reported her cats are, most atypically, wandering, with no signs of the woman, he knows Jillian will be available.

When they find more than three times the number of cats he knew the woman to have, the back door open, and boxes piled everywhere, they are very concerned. It goes beyond "concerned" when Shawn finds a dead body in the guest bedroom.

It gets worse when the body is identified as Chester Wilson, the local Animal Control officer, with whom Shawn has clashed in the past.

Meanwhile, the owner of the home, Minnie Schultz is found, frail and confused, wandering down Main Street, with a kitten in her tote bag.

This is a fun, engaging mystery with smart, mostly good-natured characters, who have their own array of strengths and weaknesses. Eight books in, they're still learning and developing.

This is the first I've read in the series, and there were points at which I simply didn't have background detail that would have been covered in previous books, but at no point did it interfere with following the story or caring about the characters.

I received a free copy of this audiobook from Audible in exchange for an honest review.

Great fun . No deep plot, and you have to love cats, but it was a fun diversion.

Fun book. Good narrator. l have read most of the

series and enjoyed them. Interesting mysteries around people who really like cats of all kinds