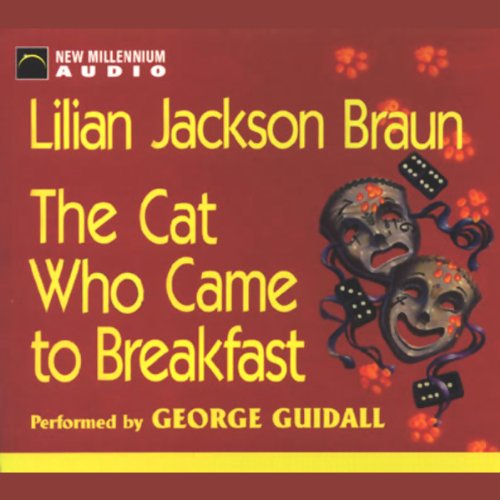 The Cat Who Came to Breakfast

The Cat Who Came to Breakfast

The development of a major resort complex at the southern end of Pear Island, affectionately known as Breakfast Island, is turning the town upside down. Local residents, summer people, and mainland fishermen are all hopping mad that the peace of their retreat is being shattered. But who is angry enough to murder?

When a cabin cruiser explosion in the marina sets off a series of "accidents", Qwilleran begins to wonder if sabotage is involved. But he has his work cut out for him. There are plenty of suspects, plenty of motives, and plenty more "accidents" occurring. Can Qwill and the cats uncover the murderer's identity before they become the victims of one of the many mishaps plaguing Breakfast Island?

With Koko and Yum Yum on the scene, you can bet that the mysterious events on Breakfast Island will be exposed. But will it happen before someone else is killed?

the cat who is for any age group

What made the experience of listening to The Cat Who Came to Breakfast the most enjoyable?

What was one of the most memorable moments of The Cat Who Came to Breakfast?

Which character – as performed by George Guidall – was your favorite?

All of the character, he would change his vioce for each one. It was great!!

I am in the process of obtaining ALL of the "Cat Who" series on audio. This task is a bit difficult because Audible does not have all of them, nor does my library. For anyone who is not aware of this series, I will say this: LJB began writing this series in 1966. The last book was written in 2007, I believe. To my knowledge, there are 31 books in the series, but don't quote me on that! It's very light reading/listening. One of those series where you get to "know" the characters and can't wait to get into the next book. LJB wrote with absolutely NO undesirable language, and when a murder occurs, there are no gory details. George Guidall IS James Qwilleran. (To me, anyway!) Even when I listen to him narrate another book, I associate him with J.Q.
It's fun to listen to the series in order, (the first book being "The Cat Who Could Read Backwards"), but it's not absolutely necessary.
This is not an exciting series - if you like your mysteries to have excitement and gore and obscenities, I would predict you would be bored with the "Cat Who" books.

WOW, George Guidall brings it all to life

What did you love best about The Cat Who Came to Breakfast?

I have read all the cat books and must say that the audio versions are even better than the books, especially with Guidall as the reader. Just makes me understand the characters better hearing his interpretation.

Not really, this is light reading, cute and fun

An excellent "Cat Who" story as always

I have never been able to get enough of these wonderful stories from 400 miles north of everywhere. George Guidall is easily my favorite narrator and is the perfect fit for the adventures of Mr. Q and his animal companions.

Would you listen to The Cat Who Came to Breakfast again? Why?

No. The few words that were mispronounced
were very irritating!

What does George Guidall bring to the story that you wouldn’t experience if you just read the book?

No, but as always her books are hard to put down.

it is amazing how many storms the lead character goes through, dark and stormy night. the plot was good, and the reader can keep up easily, but the best evidence is only available to the lead character. I much prefer other books of the author that have evidence everyone else over looks. narrator brought the characters to life, and the book is recommended to adults both young and old.

I was disappointed in this book. I thought it would be more of a mystery, but it isn't. It is a nice book but didn't meet my appetite for a good mystery. The cats are cute and funny.

The cat who came to breakfast.

Loved it of course. Love the author, love the reader, love the series. I would listen to War & Peace of if George Guidell read it.

My mother introduced me to Lilian Jackson Braun's delightful Cat Who series about 30 years ago, so I've gone from thinking of Qwill as being a charming "older" man back then, to now thinking of him as being about 15 years too young for me! LOL! The characters are loveable and memorable. Once you've become acquainted with them, you'll wish you could pick up the phone and call them just to see how they're doing. I like that Ms. Braun's writing is so mild and PG rated.