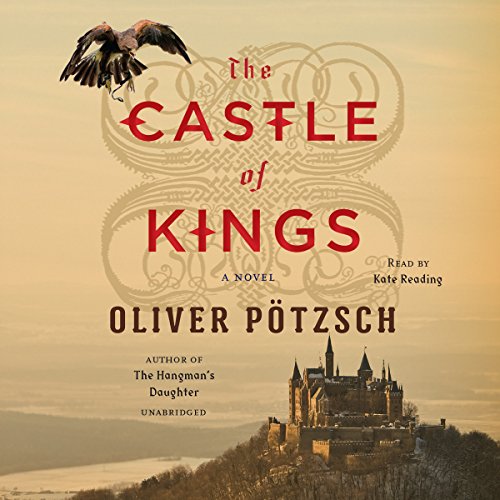 The Castle of Kings

In 1524, in what is now Germany, hundreds of thousands of peasants revolt against the harsh treatment by their aristocratic overlords. Agnes, the daughter of one of these overlords, is not a typical 16th-century girl. She refuses to wear dresses and spends more time with her pet falcon than she does trying to attract potential suitors. In fact there is only one man who interests her: Mathis, a childhood frien, whom she can never marry because of his lowly birth. But the situation changes dramatically when a rogue knight attacks Agnes, Mathis shoots the knight to save her life, and the two are forced to go on the run together, into the midst of the raging peasants' war.

Over the next two years, as Agnes and Mathis travel the countryside, are captured by and escape from various factions of the war, participate in massive battles, and make new friends both noble and peasant, they also, of course, fall in love. Meanwhile, Agnes' falcon finds a mysterious ring, and Agnes begins having strange dreams that lead the two lovers to revelations about their place in the world and in the emerging German states.

With The Castle of Kings, Oliver Pötzsch has written a historical epic that calls to mind Ken Follett's The Pillars of the Earth and Bernard Cornwell's Agincourt.

What listeners say about The Castle of Kings

Almost as good as the Hangman's Daughter series. Worth one credit and a bit more.

loved it as much as the hangman's daughter series

loved it as much as the hangman's daughter books, which were also superb. have enjoyed all of this authors books that have been translated

I love this guy’s stories!

The afterword talks about how German history is not just castles and knights and damsels in distress (making reference to the use of the castle by the Nazis). For me the novels of this author are a chance to recognize a German history obscured in my mind by the horrors of the Nazis. Though they are a reminder of the horribly cril that repeats itself over and over in the past

Another Excellent Book by Pötzsch

Pillars of the Earth this isn't

What disappointed you about The Castle of Kings?

This book was slow moving, not very engaging, and lacking the complexity you should reasonably expect out of a 665 page book. It had YA style plot elements complete with holes large enough to drive trucks through. This might be explained by the need to come up with a plot that fit the occurrences in history the author wanted to cover, but I cannot excuse him for it. In general this felt like a YA caliber book or fan fiction. It is touted as something akin to Princess Bride, Lord of the Rings, or Pillars of the Earth...my caveat here would be that those were good. The stories were engaging; you cared what happened to the characters. I found that these characters lacked depth and emotional presence and the only thing I wanted for them to do was stop shrieking each other’s names at in-opportune times. Agnes was supposed to be a heroine. She was terribly unfortunate, but not terribly heroic. The author's vocabulary is questionable with nonsense words thrown in and clunky descriptors here and there that could have been handled with more finesse.

Would you ever listen to anything by Oliver Pötzsch again?

When the bird took the lance at the end because I knew it had to be almost over.

Grudging determination to slog through it.

Set in the Palatinate of 1520s, this Historical Fuction novel propels our Heroine, Agnes, theough many adventures as she seeks to understand her dreams and the mysterious signet ring she has found. Intertwined with her story is that of the local blacksmiths son Mathis (pron Matese), her childhood friend and love deapite her high birth and his low. Theoughout the story we see through their eyes the devastation of the real war of the time and it felt strangly timely as it was the.peasants risng up to wrest control from the nobels There us a degree of the fantastic here... Some remarkable events and luck but nothing of fantasy. I really enjoyed this novel and the unabridged audible presentation

Poor plot, just too conveniently depending on dreams to more the story along. Did not like the narration either. I have listened almost all of the authors previous works but this was particularly disappointing.

what a waste of a credit...sooo disappointing...

What would have made The Castle of Kings better?

An editor who would have pruned this book to address its painful plodding pace, repetitiveness, whining one-dimensional characters, lack of action...to the point where u don't really care what happens to any of these characters even though you've already spent 10 hours listening to this...

Has The Castle of Kings turned you off from other books in this genre?

no...i generally love historical fiction, but this was just awful...

sooo annoying...i listen to audiobooks while i commute...some books are so compelling that u want to hear every word and even when you finally pull into your driveway at home, you still sit there for a few minutes to hear the next part of the story...but The Castle of Kings is NOT that kind of book...in fact it was soo bad that the narrator's tone (and the content of the novel itself) would result in my drifting off repeatedly and having to rewind to listen to what i had missed (which btw wasn't much)...

NONE...ABSOLUTELY NONE...character development and plot was sophomoric and one-dimensional at best...narration was annoying...struggled to get thru the majority of this audiobook...would NOT recommend this to anyone...

wish i could get my money back on this...but hopefully my review will prevent someone from wasting one of their credits on this book...

What did you love best about The Castle of Kings?

I'm almost finished this book, and I was sucked in at the beginning--I couldn't wait to listen to the next chapter! However, as the book goes on it gets quite dull, and the characters get very mundane. One big pet peeve I have so far with this book is Agnes and M--they're very immature and their "arguments" drive me insane. It's starting to feel like the characters were written by a thirteen year old who has never experienced a real relationship with real arguments.

Would you recommend The Castle of Kings to your friends? Why or why not?

I'm unsure at this point.

Did Kate Reading do a good job differentiating all the characters? How?

Not really. In fact, I have been wondering if I might have enjoyed the story more if I had simply read it, instead of listening to it. Ms Reading does not do that well of a job with this reading--either the characters sound too whiny or too similar; I'm not sure how to explain it but the reading makes the characters feel like they're lacking even more depth and growth.

It's an OK story--not grand, not memorable, just OK.

The little girl in me enjoys these stories of knights and damsels. There is plenty of adventure and a little romance.