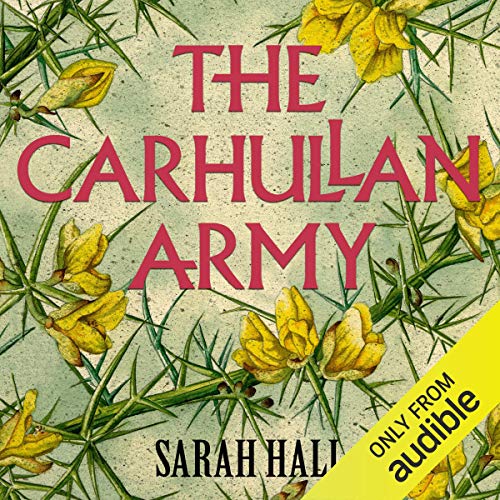 Set in the part of England once known as The Lake District and frequented by hordes of landscape-hungry tourists, The Carhullan Army is narrated by a young woman who has adopted the name Sister.

Britain after its union with the United States and numerous unsuccessful foreign wars, has found itself in the grip of a severe fuel crisis and the country is now under the control of a severe body known as The Authority. All firearms have been handed over to the Government and all women have been fitted with contraceptive devices; this Britain of the near-future is brutal and very-near desperate.

Sister's only hope - or so she thinks - lies in finding the Carhullan Army: a mythical band of women who lives a communal existence in the remote hills of Cumbria.

A Handmaid's Tale for our times, Sarah Hall's novella is about women, terrorism, and individual choice. As compelling as it is believeable, The Carhullan Army represents yet another stage in her development as one of Britain's most original and relevant story tellers. Sarah Hall was born in Cumbria and currently lives in Norwich, Norfolk. She is the author of four novels: Haweswater, The Electric Michelangelo, The Carhullan Army, and How to Paint a Dead Man; a collection of short stories, The Beautiful Indifference; original radio dramas; and poetry. She has won several awards, including the Commonwealth Writers’ Prize for Best First Novel, the Betty Trask Award, the John Llewellyn Rhys Prize, the James Tiptree, Jr. Award, the Edge Hill University Short Story Prize, and has twice been recipient of the Portico Prize. She has been shortlisted for the Man Booker Prize, the Prix Femina Etranger, the Arthur C. Clarke Award for science fiction, the BBC National Short Story Award and the Frank O’Connor International Short Story Award. This year she was named one of Granta’s Best Young British Novelists.

What listeners say about The Carhullan Army

Reading the synopsis and listening to the sample, I was quite looking forward to this, but unfortunately was disappointed in both the story and narration.

There was too much exposition on sex and too little plot and character development. At times it felt the author lost her way - the pacing of the novel was uneven - and there was little to explain how society could have devolved into the world she'd created.

As for the narrator, her base style was fine, but most of her character voices were dreadful, especially the male characters, but also the 'strong' women - they all sounded gruff to the point of absurdity.

A shame. If I hadn't returned the last book I listened to because it had missing chapters, I'd be asking for a refund for this one.