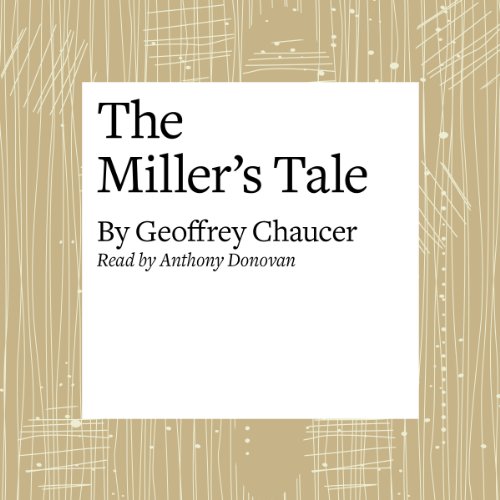 In the aftermath of the Knight’s tale of courtly romance (albeit with characters from Greek mythology), the drunken Miller interrupts the host’s plans to have the monk tell the second of literary master Geoffrey Chaucer’s Canterbury Tales, and turns the tone of the narratives in a new direction. His is a very uncourtly romance involving an old carpenter, his young wife, a scheming, lusty student, and a foolish, lovelorn cleric. Anthony Donovan is comic in his performance of the bawdy storyteller in this selection from the original audiobook production that is based on Frank Ernest Hill’s modern English translation.

This is a story from the Canterbury Tales I: Modern Verse Translation collection.

Chaucer's greatest work, written towards the end of the fourteenth century, paints a brilliant picture of medieval life, society and values. The stories range from the romantic, courtly idealism of "The Knight's Tale" to the joyous bawdy of the Miller's; all are told with a freshness and vigor in this modern verse translation that make them a delight to hear.

What listeners say about The Canterbury Tales: The Miller's Tale (Modern Verse Translation)

Chaucer is so great.

The Miller's Tale is funny and crass and very enjoyable as a story. In here, the intoxicated Miller tells of a love triangle between a carpenter, his young wife, and a male that happens to be living in their home. The narrator is great: very enthusiastic with his reading, very enjoyable.

We used this short audio as a supplement in our homeschool along with a print copy of The Canterbury Tales and loved it. (Even though this particular tale is a little vulgar, which was Chaucer's point.) It's great to hear the poetry with some modern translation, read as it is intended, and my high schoolers love seeing that 1300's literature has some of the same themes as literature and media today.