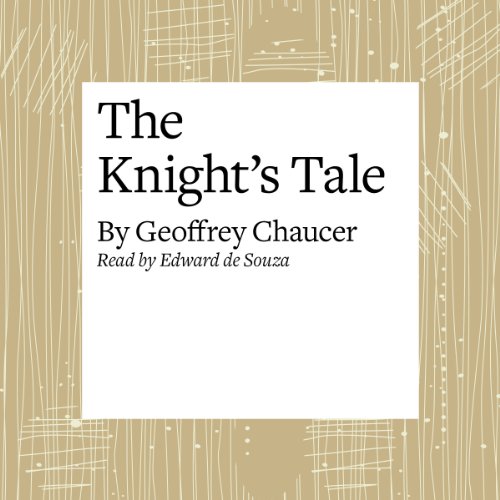 The first of Geoffrey Chaucer’s Canterbury Tales, inspired by Boccaccio’s epic poem Teseida, pits Thebian cousins Arcite and Palamon, once imprisoned in the same tower by Thesus, the Duke of Athens, against one another as they vie for the heart of an Athenian princess named Emily.

Edward de Souza’s reverberating, attention-commanding baritone has a stately quality that transports the listener to the front lines of the climactic battle, and his graceful command of the rhythmic iambic pentameter does justice to this canonical tale of chivalry and courtly love.

This is a story from the Canterbury Tales I: Modern Verse Translation collection.

Chaucer's greatest work, written towards the end of the fourteenth century, paints a brilliant picture of medieval life, society and values. The stories range from the romantic, courtly idealism of "The Knight's Tale" to the joyous bawdy of the Miller's; all are told with a freshness and vigor in this modern verse translation that make them a delight to hear.

What listeners say about The Canterbury Tales: The Knight's Tale (Modern Verse Translation)

The Knight's Tale is fantastic-the first of the actual tales in The Canterbury Tales, telling the story of two men that have fallen utterly in love with a woman at first sight, vowing to fight for her despite their relationship to one another. (They are cousins, I believe.) You can read this one for sheer enjoyment because it is wonderful, or you can pick it apart for tons of themes. This is one of the more gentlemanly and mannerly stories in the Tales, and I just love it. It packs a punch.

Edward de Souza is absolutely fantastic in his narrating here. He reads this poetry perfectly and is dramatic in just the right places. We used this short audio as a supplement in our homeschool along with a full print copy of The Canterbury Tales and loved it. It's so good to be able to hear the [modern translation] poetry as it is intended and also to show my high schoolers that literature from the 1300's is actually really fantastic.

However, I don't think one has to be a student to enjoy this recording.

I paid for this at the regular pricing as it was quite reasonable and much, much less than the price of a credit. Well worth it.