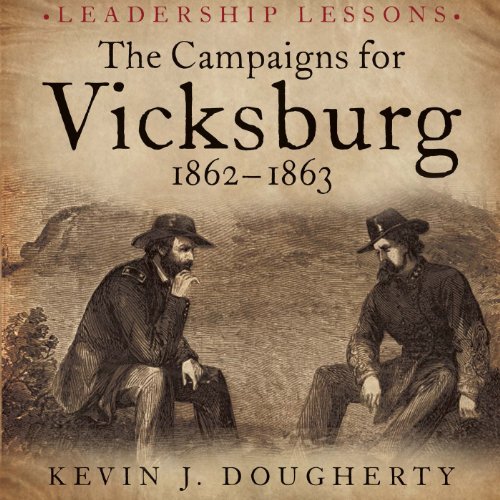 Long relegated to a secondary position behind Gettysburg, Vicksburg has more recently earned consideration by historians as the truly decisive battle of the Civil War. Indeed, Vicksburg is fascinating on many levels. A focal point of both western armies, the Federal campaign of maneuver that finally isolated the Confederates in the city was masterful. The Navy’s contribution to the Federal victory was significant. The science of the fortifications and siege tactics are rich in detail. The human drama of Vicksburg’s beleaguered civilian population is compelling, and the Confederate cavalry dashes that first denied the Union victory were thrilling. But perhaps more than any other factor, the key to the Federal victory at Vicksburg was simply better leadership. It is this aspect of the campaign that Leadership Lessons: The Campaigns for Vicksburg, 1862-1863 seeks to explore.

The first section of this book familiarizes the listener with the challenges, characteristics, and styles associated with leadership during the Civil War in general. It also outlines the Vicksburg Campaign by explaining the strategic significance of the Mississippi River and Vicksburg, detailing the opposing forces and the terrain, discussing the failed attempts to capture Vicksburg over the winter of 1862-63, and tracing the brilliant campaign of maneuver and logistics that allowed Grant to ultimately lay siege and win a Federal victory. The second section of the book contains 30 “leadership vignettes” that span the actions of the most senior leaders down to those of individual soldiers. Each vignette focuses the campaign overview to the specific situation in order to provide appropriate context, explains the action in terms of leadership lessons learned, and concludes with a short list of “take-aways” to crystallize the lessons for the listener.

The human drama of Vicksburg involved such traits as daring, persistence, hesitation, raw courage, vacillation, self-confidence, and over-reliance - all with a great prize at stake. This study of many of the Civil War’s most famous commanders who vied for the Rebel “Gibraltar on the Mississippi” reveals combat on a wide scale, but more importantly lessons on decision-making that still apply to this day.

Kevin Dougherty, a career Army officer and more recently a university history instructor and tactical officer at the Citadel, is the author of six previous books on the Civil War.

What listeners say about The Campaigns for Vicksburg, 1862-1863