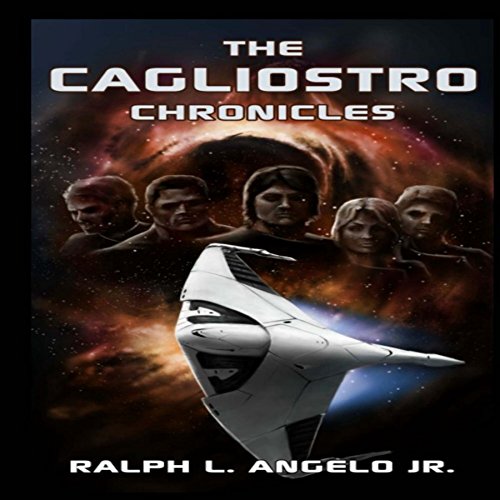 In the year 2089, man's first faster-than-light space flight is about to begin, but where it ends will be filled with action, adventure, and the unknown! The Cagliostro is an experimental space craft that is destined to begin man's first faster-than-light voyage beyond his solar system and into a greater universe filled with dangerous adversaries, intrigue, and a deadly conspiracy set to tear humanity apart! Join Mark Johnson and his crew of adventurers as they travel beyond our wildest dreams and into a universe fraught with mystery, action, and danger!

What listeners say about The Cagliostro Chronicles

Better than your wildest dreams! A must listen!

I am a big fan of Ralph L. Angelo's THE CAGLIOSTRO CHRONICLES trilogy because it is literally a combination of Doc Savage and his Amazing Five, The Challengers of The Unknown, and the Fantastic Four in outer space pushing the limits of space opera literature. And that's exactly what it is. High octane, balls to the wall, we're going out into the great unknown with intergalactic political intrigue thrown into the mix. So imagine my surprise when I found out that there was an audiobook from Audible.com of the first books and in the trilogy? Over the Moon and on Cloud 9 would be the expression. And with oustanding narration by Tristan Wright, I was pleasantly rewarded. To hear the story and to visualize what I was hearing was beyond my wildest dreams and expectations. And it made me hopeful that, in time, Mr. Wright will be narrating the next two CAGLIOSTRO CHRONICLES books. I thoroughly enjoyed the audiobook. And I would recommend it to anyone looking for fun, adventure and intrigue. Check out THE CAGLIOSTRO CHRONICLES audiook from Audible.com! You won't be disappointed! Have fun!

What was one of the most memorable moments of The Cagliostro Chronicles?

I will always love it when the crew of the Cagliostro take off for the first time!

Which character – as performed by Tristan Wright – was your favorite?

Keep up the great work!

What made the experience of listening to The Cagliostro Chronicles the most enjoyable?

Suspense of the story line

The story line kept you wanting to know what happens next and where it was going. Looking forward to the sequel.

Great story, unfortunately it seems to have been written by a 14 year old. I really wanted to like it and I actually listened to the entire book. It's a real shame because the story had something, it's just that the author could not write in an adult manner. The characters we're shallow and juvenile in their decisions throughout the book.
The narrator could be better, but he read it like it was written. I must admit he had little to work with, and if not for him I may not have finished the book. The character voices were weak and the emotions and voice tones did not line up with the actual situation within the story.

This story moved along well and kept me wanting to continue. Had it been in book form I'd say a page turner. The author is very descriptive and the narrator paints pictures in you mind as he reads. I would recommend this audiobook to all.