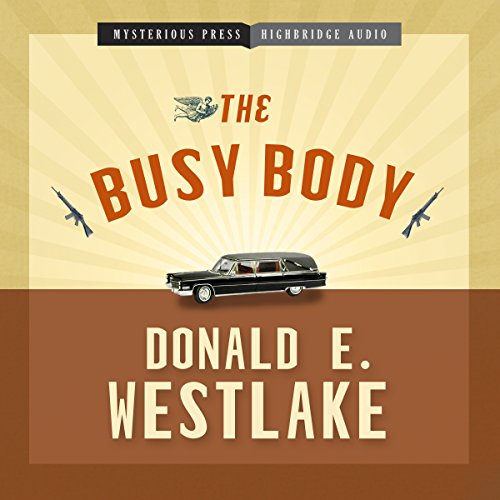 Al Engel had worked his way up to being Nick Rovito’s right-hand man, near the top of the syndicate. And this was a delicate job that Rovito had given him: retrieving a very important jacket, loaded with heroin, from the fresh grave of the drug mule who was accidentally buried wearing it.

Rovito ordered Engel to go to the grave in the early hours of the morning, dig up the coffin, and get back the suit - plus kill two birds with one stone (so to speak) and whack the guy who would help with the digging. There was just one problem (at least - just one to begin with): It turned out the grave was empty. Suddenly Engel was the one finding himself “in deep”.

Busy Body is early Westlake, as he was mastering the genre he would become known for: the comic caper.

What listeners say about The Busy Body

Would you listen to The Busy Body again? Why?

If you're a fan of Westlake, this is an early book with a lot of early threads. Non politically correct and loving New York

This was the first book of Donald E. Westlake that I've given a listen to and I'll definitely be listening to all I can get my ears on... get it.

Read to perfection by Brian Holsopple.

What can I say, it's a Westlake. Motivated to hear the end. I didn't guess this ending. Wouldn't it be so cool to meet Westlake? Another time.

What made the experience of listening to The Busy Body the most enjoyable?

I'm a late convert to Westlake's subtle comic charms. I read a fair bit of crime and have read plenty of Westlake's alter ego, Richard Stark. I've only started to get into his comic capers in the last few years and realise that their is much gold here too. I like the whiny, almost apologetic, mobster hero and the narrator Brian Holsopple is a good choice to voice his thoughts.

I wanted to know what happened next. Westlake is an easy listen for sure.

Which character – as performed by Brian Holsopple – was your favorite?

Who was the most memorable character of The Busy Body and why?

Westlake introduces plenty of oddball characters and potential "guilty parties" throughout so it's really just a mix-up of them all.

This title is a stand alone so you won't need to read something else to get the running gags. I'd recommend it if you are a fan of Lawrence Block, Chester Himes, or even someone like George MacDonald Fraser's Flashman series.

What did you love best about The Busy Body?

This was my first listen to a Westlake book and I enjoyed it. It was a good little mystery with amusing characters and humorous incidents. I plan to listen to more by Westlake.

Probably not his best, but entertaining

A second outing for Westlake's The Busy Body. I've stalled on listening to more from Block's Evan Tanner series, until such time as I read the fifth, so I was minded to re-listen to this one during the commute and some hours at work in solitary confinement doing a bit of a solo project.

I enjoyed it last time. I enjoyed it as much second time around, probably a bit more. If I run out of things in my Audible library, I reckon I would enjoy listening to this a third time.

60s book, humour, crime, the mob and some missing drugs and some grave robbing, a likable main character, looking to get out from under the jam he's in.

I said it all last time, I think.

* September, 2018 thoughts
----------------------------
I have enjoyed a few Westlake novels over the years, mostly more hard-boiled fare with Parker his professional criminal as protagonist from Westlake's alter-ego Richard Stark than the lighter, comic novels Westlake put out under his own name.

The Busy Body is a mid-60s offering from Westlake and a New York caper. It was a different experience for me on this occasion - having a book read to me, as opposed to reading a book. It's not my preferred format, but actually worked for me on this occasion as I could listen to the dulcet tones of Brian Holsopple (never heard of him before, but he's very good), while working on a Saturday morning in a slightly less frenetic work environment.

Our main plot involves a mob man, Al Engel initially attempting a spot of grave-robbing to recover $250k worth of Mafia drugs which have been inadvertently buried with the courier who died of a heart attack. We have an empty grave and Engel is tasked by his master, Nick Rovito with tracking down the missing suit ergo drugs and who the hell cares about the missing corpse?

Enjoyable, inoffensive, entertaining, I'll probably remember it longer because of the format it was digested in than if it was an old 60s or later tatty paperback that I turned the pages over.

Probably not his strongest ever book but it was okay for me.