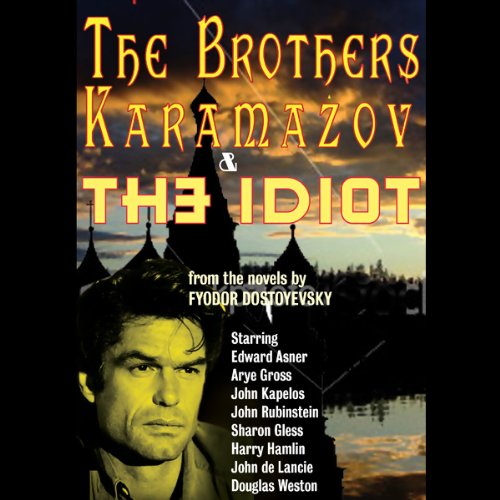 The Brothers Karamazov & The Idiot (Dramatized)

Director David Fishelson transforms Dostoyevsky's The Brothers Karamazov and The Idiot into spellbinding drama that illuminates both titanic novels.

In The Brothers Karamazov, the passionate brothers spring to life, led by their roué of a father  who entertains himself by drinking, womanizing, and pitting his three sons against each other. The men have plenty to fight over, including the alluring Grushenka.

In The Idiot, we meet the kindly, childlike Prince Myshkin as he returns to the decadent social whirl of 1860s St. Petersburg. The two most beautiful, sought-after women in the city compete for his affections, in a duel that grows increasingly dangerous.

What listeners say about The Brothers Karamazov & The Idiot (Dramatized)

I was disappointed in this dramatized version of two of my favorite Doestoevsky's works. Maybe because I love the stories so much, it's hard to imagine capturing both in a mere 3 hours of time. But, more than that, the New York and Chicago-like accents turn these stories into more of a mob-like drama, rather than the true, Russian epics they are meant to be. It doesn't work. Until they can hire Russian artists to perform, thereby preserving the true drama meant to be, save your money for the real deal - go for the unabridged versions.

This is a great dramatization of a classic russian masterpiece.

while it is true that the actors accent is not russian, to me this is not essential, since this drama could have ocurred anywhere in the world, and you are better engaged if the actors sound local.

All the actors have pleasant voices and appropiate intonation perfectly matched for their roles, the only regret I could have (and it's a really minor one) is that the music played when changing from one act to the next, couldn't be less appropiate (comic tunes when something dramatic has just happened, etc..)

If you are not a purist and enjoy literaure and theater, do yourself a favor and listen to this audiobook, I am confident you'll finish wanting more.

I hope you enjoy it as much as I did.

This is a marvelous classic, and the narrator was great, but it was brutally edited. Buy & enjoy this audiobook, IF you've read the book already, & want to enjoy a radioplay. It was great as a radioplay, but one misses so much, if you haven't previously read this giant of a novel.

Excellent Quality for Both Plays

I would recommend this to my friends for its entertainment quality.

I enjoyed both stories. The production allowed me to imagine a more realized presentation of the characters.

My favorite scene would have to be that of The Grand Inquisitor in The Brothers Karamazov. The performance was quite engaging and moving.

The one thing I did not like is the recording of the live audience. I am not a big fan of such. But, the overall presentation is excellent.

Its extremely difficult to shorten these plays...

I find Fyodor's writings very descriptive. To shorten such play is a sure miss. You miss a bit more than the reader enjoyed...